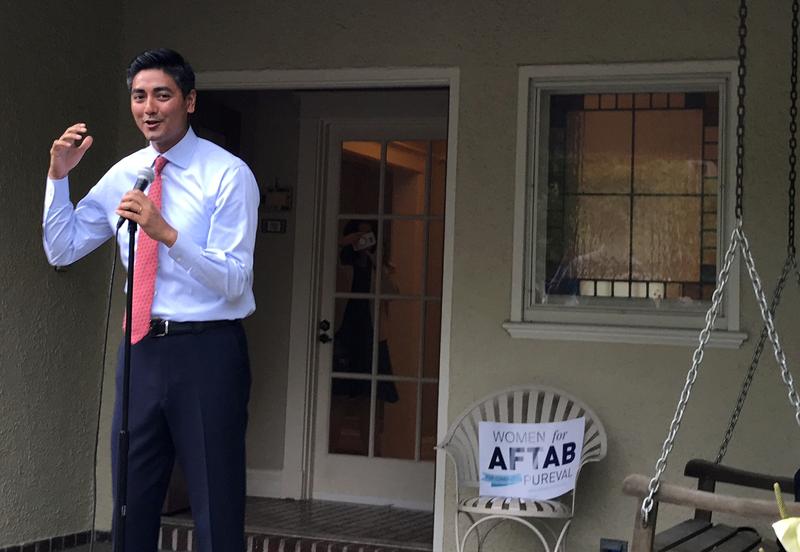 WEST ORANGE, N.J./NORTH AVONDALE, Ohio (Reuters) – Aftab Pureval, a Democrat seeking to unseat a Republican congressman in Ohio, knows the political risks in calling for gun restrictions – and taking on the powerful National Rifle Association, which has spent more than $115,000 supporting his opponent over the years.

But after a spate of school shootings, including February’s massacre at a high school in Parkland, Florida, Pureval believes voters in the Republican-leaning district have had enough of congressional inaction.

“The leaders that they sent to Washington, D.C., to represent them have had their opportunity time and time again – and time and time again, they have failed,” Pureval, 35, said after a rally with gun-safety activist and former congresswoman Gabby Giffords, who suffered brain damage from a gunshot in 2011.

A Reuters analysis shows Pureval is among Democrats in the most competitive U.S. congressional races who have embraced gun control in far greater numbers than in 2016, defying the conventional wisdom that doing so is a losing proposition in close contests.

Thirty-eight of the 59 Democrats backed by the party’s “Red-to-Blue” campaign – targeting vulnerable Republican districts – have supported gun restrictions in their official platforms, a review of campaign websites shows. Several others separately released statements calling for limits.

At this point in the 2016 election cycle, only four of 36 Red-to-Blue candidates backed gun limits in their platforms, according to a Reuters review of archived campaign websites. Reuters was unable to examine the websites for two candidates in the program that year.

November’s midterm elections will test whether gun violence has become a defining issue for U.S. voters in the wake of the Parkland shooting that killed 17 students and staff and reignited a nationwide movement for stricter gun laws after a campaign by student survivors.

Nearly all the Democrats in the three dozen most competitive races for the U.S. House of Representatives wrote multiple social media posts touting their support for anti-gun legislation and for the student-led protest, according to a Reuters review of their postings.

But many Democrats have modulated their message, avoiding inflammatory terms such as “gun control” and voicing support for basic gun rights with “common-sense” reforms.

Political risks remain. In past cycles, advocates for gun safety struggled to match the might of the National Rifle Association (NRA), the leader of the gun-rights lobby, which views any limits as an assault on the U.S. Constitution. Reuters/Ipsos polling data shows gun-rights supporters are particularly motivated to vote in November.

“It’s been a big concern for Democratic candidates that a lot of people will support gun control – but won’t make it an issue on which they’ll base their vote,” said University of California-Los Angeles professor Adam Winkler, the author of “Gunfight: The Battle over the Right to Bear Arms in America.”

In 2014, the last midterm election, the NRA reported $27 million in independent spending to back candidates who oppose gun limits, compared to $8.6 million by gun-control groups, according to the non-partisan Center for Responsive Politics.

The NRA did not respond to multiple requests for comment on its strategy for this year’s midterms.

Democrats believe now is the time to capitalize on the issue, said Tyler Law, a spokesman for the Democratic Congressional Campaign Committee.

“Republican inaction will continue to generate political backlash and help Democrats take back the House,” he said.

A spokesman for the Republican Party’s congressional campaign arm, Jesse Hunt, said the politics of gun violence would play out differently in every district and that the party’s candidates would pick their own positions.

U.S. Representative Steve Chabot, the Ohio Republican running against Pureval, said he had heard from voters on both sides of the gun issue.

“I don’t think anyone knows if it’s going to have an impact” on the election, said Chabot, who is unconvinced more gun restrictions will prevent violence.

Democrats have long feared that support for gun restrictions would cost them the backing of blue-collar swing voters – the group widely credited with tipping the presidential contest to Republican Donald Trump in 2016.

This year, a different voter bloc could help Democrats flip the 23 Republican seats needed to take control of the House: educated, suburban women who might normally lean Republican but see gun violence as increasingly personal, said Stuart Rothenberg, an analyst with the non-partisan website Inside Elections.

Reuters/Ipsos polling shows support for gun control has risen over time, from 57 percent of Americans who supported strong or moderate firearms restrictions in 2012 to 68 percent this year.

The problem with pushing gun-control in suburban districts is that many are not entirely suburban, said Kyle Kondik, an analyst at the University of Virginia Center for Politics.

“A lot of these districts have rural components that are not at all receptive to messages of gun control,” he said.

Many Democrats seeking Republican-held seats have made opposition to the gun lobby a feature of their campaigns.

Randy Bryce, an ironworker running in Republican Speaker of the House Paul Ryan’s Wisconsin district, released a television advertisement ahead of next month’s primary in which he fired a rifle and touted his experience in the Army before attacking the “NRA profit machine.”

In California, candidate Gil Cisneros has criticized Republican leaders for taking the gun lobby’s “blood money.” In Georgia, national gun safety activist Lucy McBath, whose son was shot to death six years ago, won the Democratic nomination for a competitive seat last week after blasting congressional inaction and the NRA.

On policy specifics, however, many Democratic candidates and gun-safety groups have staked out strategically moderate positions. While virtually all Democrats support universal background checks – a policy most gun owners support, polls show – some stop short of embracing an assault-weapons ban.

Democratic Party officials say their success at recruiting military veterans this cycle makes it easier to run on gun limits. Democratic House candidate Jason Crow – a veteran who served in Iraq and Afghanistan – argues that the NRA has stymied reasonable debate on gun policy.

“It’s clearer than ever that this public health crisis is not going to get any better while our politicians are bought and paid for by the gun lobby,” said Crow, who supports an assault-weapons ban, expanded background checks and restricting the sale of high-capacity ammunition magazines.

In the current campaign, Coffman touts his support for increasing federal funding for mental health and school safety reforms while still opposing any substantive limits on gun sales.

The district includes the site of the 2012 movie theater shooting in Aurora that killed 12 people and is near Columbine High School, where 13 people were murdered in a 1999 school massacre.

And yet two Democratic state legislators lost their jobs after pushing through a package of gun restrictions following the Aurora shooting. Voters removed them in recall elections supported by the NRA.

In New Jersey, Republican House candidate Jay Webber supports expanding background checks and allowing judges to confiscate firearms at the request of family members, but has opposed a ban on high-capacity magazines.

Still, she is careful to emphasize her military experience and support for basic gun rights, underscoring the delicate dance Democrats face in taking up the explosive issue.

“I’m not anti-gun. I’m as pro-Constitution as you can get,” she said. But, she added, “The level of gun violence in this country is not normal.”