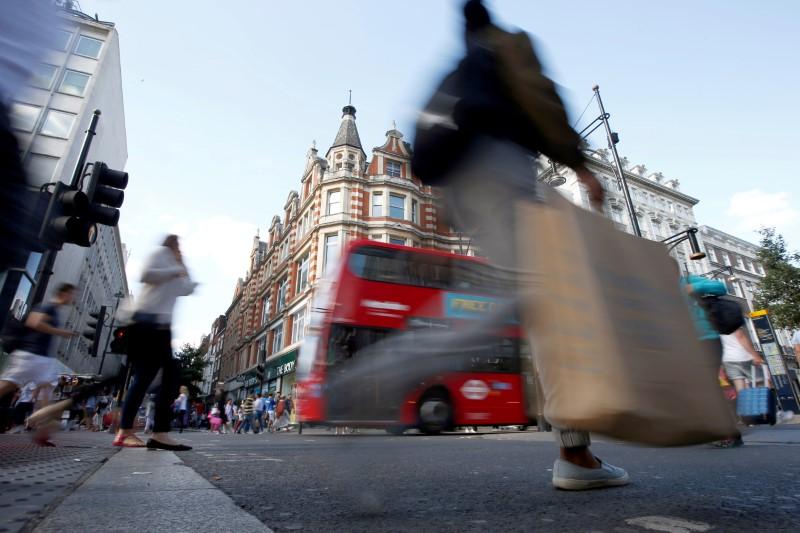 LONDON (Reuters) – Confidence among British consumers and businesses remains stuck well below levels before the Brexit vote in 2016, surveys showed on Tuesday, two days before an expected interest rate increase by the Bank of England.

One polling firm said the lack of clarity about leaving the European Union in March next year was likely to be a drag on consumer confidence in the months ahead.

Britain’s headline gauge of consumer confidence, compiled by market research firm GfK for the European Commission, edged down -10 in July from -9 in June, a touch weaker than expected by economists who took part in a Reuters poll.

Joe Staton, GfK’s client strategy director, said consumers appeared to be particularly susceptible to bad news against the backdrop of the uncertainty about Brexit.

“In the medium term, and during the uncertainty in the run-up to the UK leaving the European Union in eight months, it is hard to forecast what kind of good news will change the numbers from negative to positive,” Staton said

A separate measure of consumer confidence produced by YouGov for the Centre for Economics and Business Research showed a marginal rise in July but still down notably from before the Brexit vote.

Among companies, Lloyds Bank’s business confidence barometer remained unchanged at 29 percent, much weaker than levels of around 40 and 50 percent before the Brexit referendum. There was a slight improvement in optimism about the economy but it remained weaker than at the start of 2018, Lloyds said.

The Bank of England is widely expected to raise interest rates to 0.75 percent on Thursday even as Britain’s economy grows only slowly. The BoE thinks inflation pressures are rising despite the sluggish performance of the economy.

Lloyds said 23 percent of firms taking part in its survey said that official interest rates at 1 percent would have a “significant negative” impact on their business.