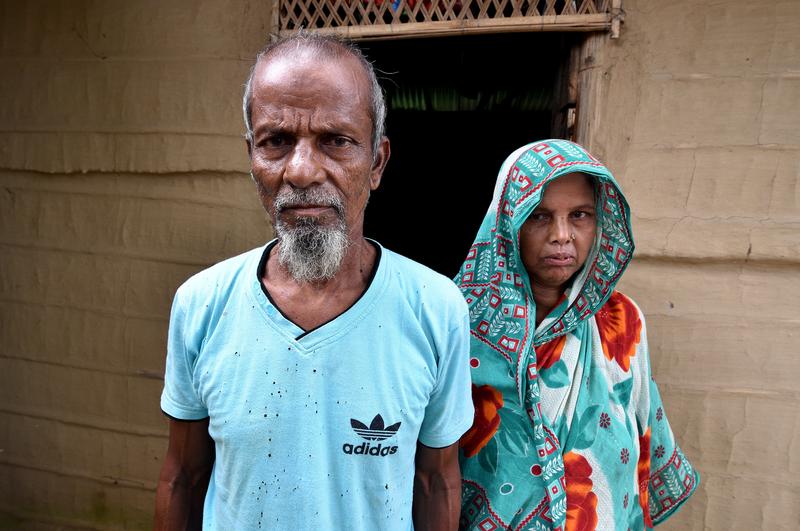 NELLIE, India (Reuters) – Thirty-six years after losing his parents, sister and a four-year-old daughter in one of India’s worst sectarian massacres, Abdul Suban says he is still trying to prove he’s a citizen of the Hindu-majority nation.

Abdul Suban, a farmer, and his wife pose for a photograph outside their home in Nellie village, in Morigaon district, in the northeastern state of Assam, India July 25, 2018. Picture taken July 25, 2018. REUTERS/Stringer

Suban is one of hundreds of thousands of Bengali-speaking Muslims categorized as “doubtful voters”, who will not find their names in a National Register of Citizens (NRC) the northeastern border state of Assam will release on Monday.

“If the government has decided to brand us foreigners what can we do?” said the 60-year-old. “NRC is trying to finish us off. Our people have died here, but we will not leave this place.”

Suban was seated with his wife at their house a few hundred meters from a vast paddy field where, in 1983, scores of people were chased down and killed by machete-armed mobs intent on hounding out Muslim immigrants. He survived by running as hard as he could and hiding behind a bush for days.

With an eye on the 2019 national election, the BJP’s Hindu-first campaign has become more strident, critics say, playing to its core base with divisive programs such as the citizenship test in Assam, already a tinderbox of ethnic and religious tensions.

Elsewhere in the country’s northern heartland, lynchings of Muslim cattle traders have risen under Modi in the country where many Hindus consider cows sacred, further deepening social divides.

The BJP has denied the lynchings have any connection with it being in power. Modi has at least twice publicly spoken out against cow vigilantes.

Several other survivors of the “Nellie Massacre”, which killed around 2,000 people from more than a dozen villages, gave accounts of burying bodies in a mass grave now partly under water.

Villagers wait outside the National Register of Citizens (NRC) centre to get their documents verified by government officials, at Mayong Village in Morigaon district, in the northeastern state of Assam, India July 8, 2018. Picture taken July 8, 2018. REUTERS/Stringer

They said they hoped the release of the NCR list on Monday would not spark further violence. Security has been tightened across Assam.

The citizenship test is the culmination of years of often violent agitations by Assamese demanding the removal of outsiders they accuse of taking jobs and cornering resources in the state of 33 million, known for its tea estates and oil fields.

“The NRC is extremely important to make the Assamese people feel protected,” said Santanu Bharali, the legal adviser to the BJP chief minister of Assam.

“It’s a moral victory. The ethnic Assamese always maintained the presence of foreigners and this will prove that.”

But the opposition Congress party and rights activists say the government is misusing the register to target even legal Indian Muslim citizens who have traditionally voted for non-BJP parties. The BJP and NRC authorities have repeatedly denied the allegations.

To be recognized as Indian citizens, all residents of Assam had to produce documents proving that they or their families lived in the country before March 24, 1971.

Suban said both he and his father were born in Assam, and showed Reuters a soiled yellow document that showed his father’s name in the list of voters in Assam for 1965, before the cut-off date. The local border police declined to discuss individual cases, but said not all documents furnished by suspected illegal immigrants were valid.

Hundreds of thousands of people fled to India from Bangladesh during its New Delhi-backed war of independence from Pakistan in the early 1970s. Most of them settled in Assam, which has a near-270 km (165-mile) border with Bangladesh.

The migrants included many Hindus, but Modi has issued orders stating that no Hindu or members of other minorities from Pakistan or Bangladesh would be considered an illegal immigrant even if they entered the country without valid documents before 2014.

“BJP’s only aim is to do communal politics, including through the NRC,” Congress lawmaker Ripun Bora said.

Villagers wait outside the National Register of Citizens (NRC) centre to get their documents verified by government officials, at Mayong Village in Morigaon district, in the northeastern state of Assam, India July 8, 2018. Picture taken July 8, 2018. REUTERS/Stringer

The BJP said the NRC was monitored by the country’s top court and there was no question of discriminating on the basis of religion.

Following an outcry from rights groups over possible harassment of Muslims in Assam, Interior Minister Rajnath Singh said that the NRC exercise was being carried out in an impartial and transparent manner.

Singh also reiterated that people finding their names missing from the list could raise objections and appeals, and said that they would not be thrown into detention centers.

Rivals say that as Modi’s government faces disillusionment for failing to deliver on jobs and prosperity, it will step up religious mobilization across the country.

FEAR IN THE COUNTRYSIDE

The first draft of the NRC, released on Dec. 31, confirmed the citizenship of 19 million people, leading to jubilation for some and heartbreak among others.

The NRC office, however, told the Supreme Court this month that 150,000 people from the first list, a third of them married women, would be dropped from the next one, mainly because they provided false information or gave inadmissible documents.

Political activists in Assam say most of those are Bengali-speaking Muslims. NRC chief Prateek Hajela, whose office has processed 66 million documents and spent nearly $180 million in the whole NRC process, declined comment on the religion of people who would be removed from the register.

“We are doing an exercise that is unprecedented and if there are course corrections which are required to be done, we will need to do that,” said Hajela, who is guarded round-the-clock by a team of police.

Hajela said that most of Assam’s 126,000 so-called doubtful voters, and an estimated 150,000 of their descendants, would be excluded from the NRC in accordance with a court order.

One of them is Nellie farmer Suban’s son Nabi Hussain, 28, who said he has voted in two Indian elections but now fears arrests.

“We are scared,” said Hussain, his wife looking on from their mud-coated bamboo house, their nine-month-old daughter in her arms. “Terrible things happened to our family once, we don’t want a repeat.”