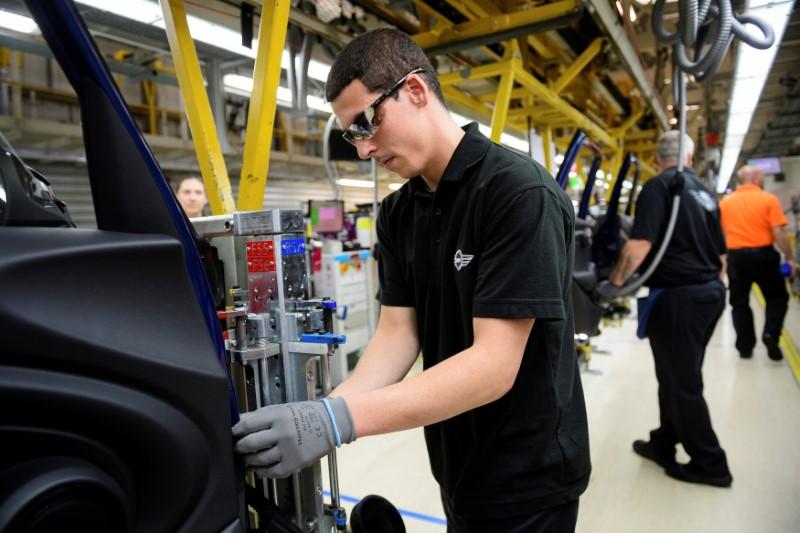 LONDON (Reuters) – A no-deal Brexit would seriously damage the car industry in Britain and the European Union by raising costs and sowing chaos for carmakers and consumers alike, the head of Britain’s car industry warned on Tuesday.

FILE PHOTO: Workers assemble cars at the plant for the Mini range of cars in Cowley, near Oxford, Britain June 20, 2016. REUTERS/Leon Neal/Pool/File Photo

With less than eight months until Britain is due to exit the EU, Prime Minister Theresa May has yet to find a proposal to maintain economic ties with the bloc that pleases both sides of her divided party and is acceptable to negotiators in Brussels.

May has stepped up precautionary planning for a so-called “no-deal” Brexit that would see the world’s fifth largest economy crash out of the EU on March 29, 2019, a step that could spook financial markets and dislocate trade flows across Europe and beyond.

Mike Hawes, chief executive of the Society of Motor Manufacturers and Traders (SMMT), said carmakers were increasingly concerned about the lack of clarity around the manner of Britain’s departure from the EU.

That has raised the prospect of Britain leaving with no deal and falling back on World Trade Organisation rules that could leave British car exporters facing EU import tariffs of around 10 percent.

“No deal… is just not an option. It would be seriously damaging to the industry not just in the UK but in Europe as well,” Hawes told reporters as he presented SMMT’s mid-year update on British car production.

At stake is the future of one of Britain’s few manufacturing success stories since the 1980s – a car industry employing over 850,000 people and generating annual turnover of $110 billion. Much of the industry is owned by foreign companies.

The world’s biggest carmakers including Toyota, BMW and Ford have urged Britain to ensure that they can import and export without hindrance after Brexit.

Supporters of Brexit admit there may be some short-term pain for Britain’s $2.9 trillion economy, but that long-term it will prosper when cut free from the EU, which they cast as a failing German-dominated experiment in European integration.

Under the current timetable, both London and Brussels hope to get a final Brexit deal in October to give enough time to ratify it by exit day.

However, the potential for major political upheaval remains, with May’s minority government facing a series of make-or-break moments in the Brexit process over coming months.

She must find a way to strike a deal with the EU, which has already rejected her preferred plan on trade, then sell that deal to her deeply fractured Conservative Party, before putting it to a vote in parliament.

Failure at any of those three hurdles could cost her job and thrust the United Kingdom into crisis.

In an attempt to rally support for May’s proposals, Foreign Secretary Jeremy Hunt visits Paris and Vienna this week.

“I will be explaining to my counterparts in Paris and Vienna that it is time for the EU to engage with our proposals, or we potentially face the prospect of a no-deal by accident, which would be very challenging for both the UK and EU,” Hunt said.

Opposition Labour Party leader Jeremy Corbyn could come under pressure at its annual party conference in September to agree to support a referendum on any deal that May can secure, the Guardian newspaper reported.

There is deep concern in boardrooms about the prospect of Britain leaving the bloc without a deal, or with a deal that would silt up the arteries of trade.

That could be highly damaging for a car industry which is dependent on the speedy movement of huge numbers of parts across borders. The average car, for example, has about 30,000 parts.

Confidence among British consumers and businesses remains stuck well below levels before Britons voted in 2016 by a narrow majority for Brexit, surveys showed on Tuesday, two days before an expected interest rate increase by the Bank of England.

The Financial Times reported that the EU’s chief negotiator, Michel Barnier, had softened his opposition to May’s Brexit plan for financial services after the UK acknowledged Brussels would have ultimate control over the City of London’s access to EU markets.

British car output in the first six months of 2018 fell by an annual 3.3 percent to 834,402, with disappointing domestic demand cancelling out strong exports, SMMT said.