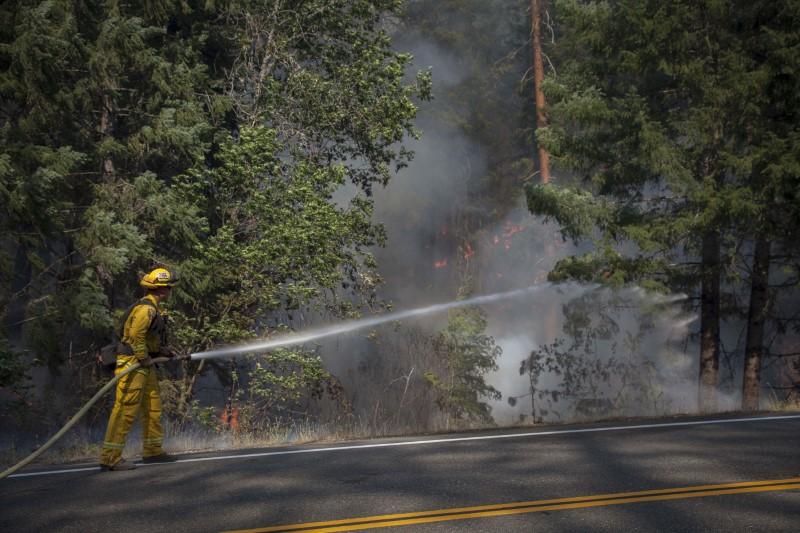 REDDING, Calif. (Reuters) – An army of firefighters in northern California gained ground on Monday against a wildfire that has killed six people and caused far more devastation over the past week than any of the scores of blazes raging across the tinder-dry American West this summer.

The Carr Fire has burned in and around Redding, California, a city of 90,000 residents about 160 miles (260 km) north of the state capital Sacramento, since last Monday, reducing more than 800 homes to ash.

So far its footprint of scorched landscape has grown to nearly 104,000 acres (42,000 hectares) – more than triple San Francisco’s land mass.

But helped by calmer winds, fire crews had carved buffer lines around 23 percent of its perimeter by late Monday, up from just 5 percent during much of the past week. The 36,000 firefighters, however, remained hampered by a lingering heat wave.

In another positive sign, authorities began allowing some displaced residents to return home, though an estimated 37,000 people still remained under mandatory evacuation orders.

The blaze stands as the deadliest of nearly 100 conflagrations burning from Texas to Oregon.

The Carr, one of 17 California wildfires, has claimed the lives of two firefighters and at least four civilians in the Redding area, including two young children and their great-grandmother, who according to family members perished while huddled under a wet blanket.

Authorities said they were still searching on Monday for seven people listed as missing since Thursday night, when gale-force winds whipped the blaze into a firestorm that jumped the Sacramento River and roared without warning into Redding and adjacent communities.

Whole neighborhoods, including the town of Keswick on the outskirts of Redding, were laid to waste as residents fled for their lives in a chaotic evacuation.

Collectively, wildfires have scorched 4.6 million acres (1.8 million hectares) so far this year, 24 percent more than the average of burned landscape tallied for the same-seven-month period over the past 10 years, according to federal data.

Authorities in California have reported levels of fire intensity and unpredictability they have seldom seen before, as a result of a volatile mix of drought-parched vegetation, triple-digit temperatures and erratic winds.

“We’re seeing extreme fire behavior,” said Corey Paulich, a spokesman for the sheriff’s office in Lake County, where a pair of fires burning about 30 miles apart have forced the evacuation of about 19,000 people in recent days and destroyed an unspecified number of homes.

Statewide, wildfires have charred nearly 410,000 acres since January, the highest year-to-date total for the end of July in a decade, according to the California Department of Forestry and Fire Protection, CalFire.

Property losses from the Carr Fire have been staggering. CalFire reported 818 dwellings burned to the ground, and more than 300 other buildings destroyed by the blaze.

On social media, residents posted photos of wandering dogs and horses left behind by owners in the fire-stricken region, a popular fishing destination that lies just south of California’s largest man-made lake.

National Guard troops and police officers were stationed in evacuated neighborhoods to guard against looting after at least four arrests of people suspected of stealing from empty homes.