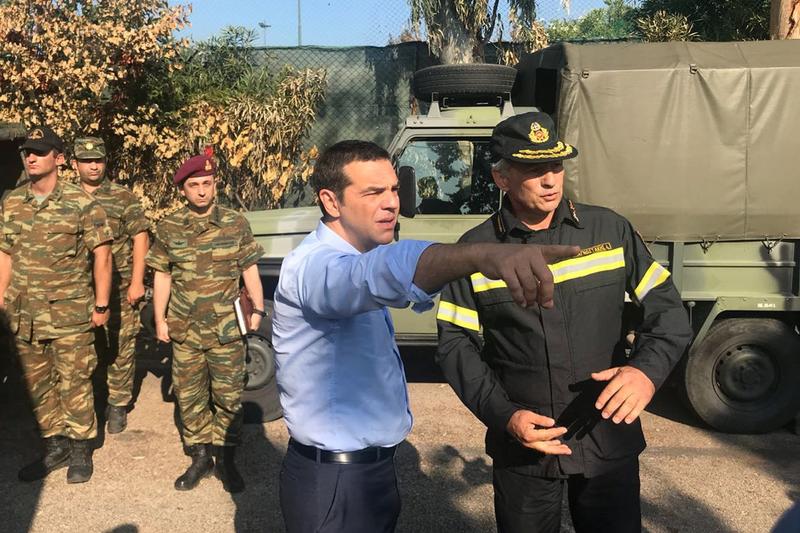 ATHENS (Reuters) – Greek Prime Minister Alexis Tsipras met survivors of a wildfire that killed at least 91 people during his first visit to the town of Mati on Monday, as rescue teams kept recovering bodies and families mourned their dead.

The country’s deadliest fire began a week ago in the coastal resort, which is 30 km (17 miles) east of Athens, and Tsipras has been attacked by opposition parties for the government’s handling of the disaster, which also left dozens injured.

Tsipras said he accepted full political responsibility for the disaster last week and pledged a series of changes, including a crackdown on illegal and haphazard construction, failings that are thought to have worsened the fire.

A week after the killer blaze ripped through Mati, the leftist premier, who is also a civil engineer, spent around an hour in the area and met locals, firefighters and police officers, his office said in a statement.

“Today I visited the place of tragedy,” Tsipras tweeted.

“(I have) untold grief but also immense respect for those who fought an uneven battle with the flames,” he said.

In the evening, the coast guard found another body in the sea. A total of 25 people are still missing and 28 bodies have yet to be identified, the government said on Sunday.

Tsipras’ visit comes a week after the disaster and aides said that he had been busy coordinating the response from Athens. His coalition partner went to Mati on Thursday and was shouted at by survivors.

“We are mourning those lost souls, those people who left (us) clasped in embrace,” said a woman called Vasso, weeping as she lit a candle in Athens’s Syntagma Square.

“This candle shows our respect to the dead. May God forgive the living,” said George Karakostas, 65.

The deaths of those trapped in a burning maze, with access to beaches walled off, has shocked the country.

Of the nearly 3,670 buildings inspected in fire-stricken areas so far, at least 1,046 need to be demolished, the government said on Monday.

Environmental organisations, including the World Wildlife Fund (WWF) and Greenpeace, said the Mati fire was the deadliest in Greece’s history.

Last week’s blazes scorched 17,000 acres (6,880 hectares) of forest land and residential areas, they said in a statement, warning of an extension of the high risk season due to climate change.

“This tragic event shows the full inadequacy and ineffectiveness of the current forest protection system,” they said in a statement.