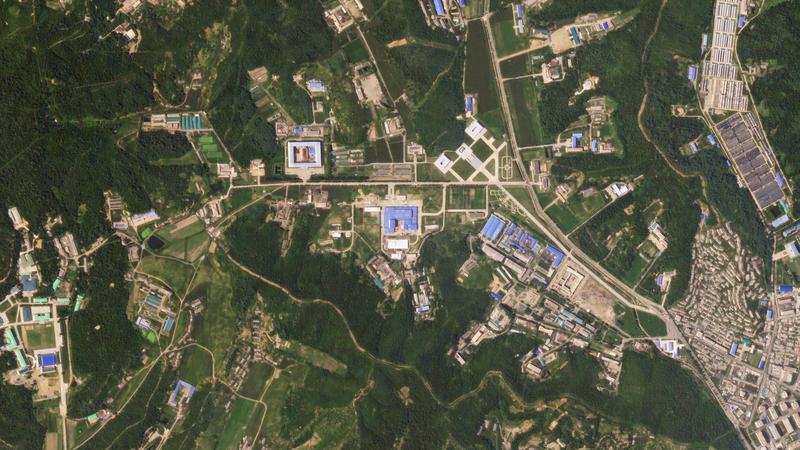 WASHINGTON (Reuters) – U.S. spy satellites have detected renewed activity at the North Korean factory that produced the country’s first intercontinental ballistic missiles capable of reaching the United States, a senior U.S. official said on Monday, in the midst of talks to compel Pyongyang to give up its nuclear arms.

Photos and infrared imaging indicate vehicles moving in and out of the facility at Sanumdong, but do not show how advanced any missile construction might be, the official told Reuters on condition of anonymity because the intelligence is classified.

The Washington Post reported on Monday that North Korea appeared to be building one or two new liquid-fueled intercontinental ballistic missiles at the large research facility on the outskirts of Pyongyang, citing unidentified officials familiar with intelligence reporting.

According to the U.S. official who spoke to Reuters, one photo showed a truck and covered trailer similar to those the North has used to move its ICBMs. Since the trailer was covered, it was not possible to know what, if anything, it was carrying.

The White House said it did not comment on intelligence.

The evidence obtained this month is the latest to suggest ongoing activity in North Korea’s nuclear and missile facilities despite talks with the United States and a June summit between North Korean leader Kim Jong Un and U.S. President Donald Trump.

Trump declared soon afterward that North Korea no longer posed a nuclear threat. Kim committed in a broad summit statement to work toward denuclearization, but Pyongyang has offered no details as to how it might go about that and subsequent talks have not gone smoothly.

It was not the first time U.S. intelligence clashed with the president’s optimism.

In late June, U.S. officials told U.S. media outlets that intelligence agencies believed North Korea had increased production of fuel for nuclear weapons and that it did not intend to fully give up its nuclear arsenal.

U.S. Secretary of State Mike Pompeo told the U.S. Senate Foreign Relations Committee last week that North Korea was continuing to produce fuel for nuclear bombs despite its pledge to denuclearize. But he insisted the Trump administration was still making progress in its talks with Pyongyang.

Joel Wit, a former State Department negotiator and founder of 38 North, a North Korea monitoring project, said it was unrealistic to expect North Korea to stop its programs “until the ink is dry on an agreement.”

That was the case with U.S. negotiations with the Soviet Union during the Cold War, and more recently with Iran, “which continued to build more centrifuges capable of producing nuclear material even as it negotiated with the United States to limit those capabilities,” Wit said.

The Sanumdong factory produced two Hwasong-15 ICBMs, North Korea’s longest-range missiles, but the U.S. official noted that Pyongyang still had not tested a reliable re-entry vehicle capable of surviving a high-velocity trip through the Earth’s atmosphere and delivering a nuclear warhead.

It is possible, the official said, that any new missiles the North is building may be for further testing of such vehicles and of more accurate guidance systems.

“They seem to have figured out the engines, but not all the higher-tech stuff, and that might be what this is about,” the official said.

“What’s more, a liquid-fueled ICBM doesn’t pose nearly the threat that a solid-fueled one would because they take so long to fuel, and that’s something we almost certainly could see in time to abort a launch, given our assets in the vicinity.”