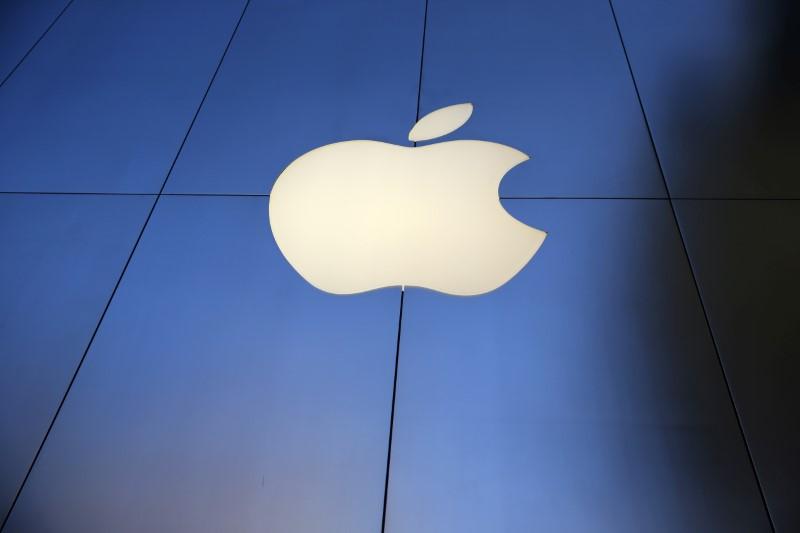 (Reuters) – Shares of Apple Inc (AAPL.O) hit a record high on Wednesday and neared a $1 trillion valuation, after the company forecast blowout current-quarter sales and analysts said a September launch of new iPhones set the stage for sustained growth.

The Apple Inc. store is seen on the day of the new iPhone 7 smartphone launch in Los Angeles, California, U.S., September 16, 2016. REUTERS/Lucy Nicholson

The company’s shares rose 4.7 percent to a high of $199.26 in early trading – within striking distance of the $206.49 mark that will give it a trillion-dollar valuation. Including Wednesday’s gains, the stock has risen 17.5 percent this year.

Apple forecast revenue of $60 billion to $62 billion for its fiscal fourth quarter, beating the $59.6 billion analysts had expected, according to data from Thomson Reuters I/B/E/S.

The iPhone maker usually launches new mobile models in September, which includes a few days worth of sales in the fiscal fourth quarter.

This September, the company is widely expected to launch models sporting full screen iPhone X-like displays along with other upgrades.

“We believe Apple is likely to launch three new iPhones in September with possible lower price points, and greater segmentation could lead to YoY unit growth in C2019,” Canaccord Genuity analysts wrote in a client note.

At least four brokerages raised price targets on the stock. Independent Research continues to be the most bullish by raising its target by $6 to $226.

“We think the lesson Apple’s management has learned from the iPhone X is when you sell a smartphone for more than $1K you can sell fewer units and still reap the financial benefits,” DA Davidson analyst Tom Forte said.

Apple sold 41.3 million iPhones in the fiscal third quarter, half a million less than expected. But the average iPhone selling price topped expectations by $30, hitting $724.

The company’s other products also did well in the third quarter, including its app store and Apple music. Analysts also expect the company to soon unveil a video service, which could take on leading streaming services like Netflix Inc (NFLX.O) and Amazon.com Inc’s (AMZN.O) Prime.

“We are really happy to be working on something, we are just not ready to talk about it in depth today,” Cook said.

BTIG analysts said Apple is likely to build its way into the market rather than buy their way in.

Reporting by Vibhuti Sharma and Jasmine I S in Bengaluru; Editing by Bernard Orr