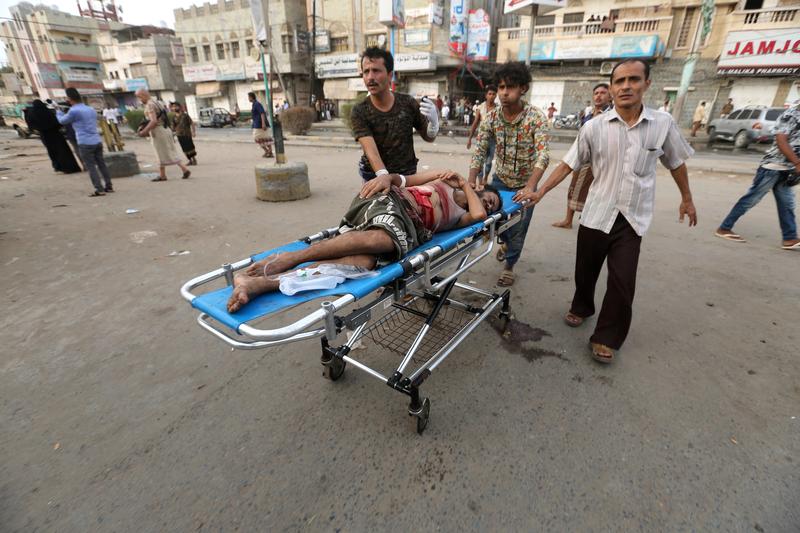 HODEIDAH, Yemen (Reuters) – Air strikes on Thursday by a coalition led by Saudi Arabia on a fishing port and fish market in the Yemeni city of Hodeidah killed 26 people, Yemeni medical sources and aid agencies said.

A man, injured by an air strike at a fish market, is rushed to hospital in Hodeidah, Yemen August 2, 2018. REUTERS/Abduljabbar Zeyad

The International Committee of the Red Cross said on Twitter it was sending medical equipment to Al Thawra Hospital to treat 50 people in critical condition following the attack.

The hospital said in a tweet a strike targeted its main gate, leaving dozens of casualties while Houthi-run Saba news agency said 40 were killed in the strike.

“It is a very painful sight, parts of bodies are everywhere around the hospital gates,” an eyewitness told Reuters.

Saudi Arabia, the United Arab Emirates and Sunni Muslim allies have been fighting in Yemen with Western backing for more than three years against the Iran-aligned Houthis.

The Houthis control much of north Yemen including the capital Sanaa and drove its Saudi-backed government into exile in 2014.

A coalition spokesman did not immediately respond to a Reuters request for comment.

The strikes come as the United Nations tries to secure a ceasefire agreement between the warring sides.

Hodeidah port is the main conduit for supplies to Yemen, where around 8.4 million people are believed by aid workers to be on the verge of starvation.

The Saudi-led alliance says capturing Hodeidah would cut off the main supply line of the Houthis and force the group to the negotiating table, but it has made no major gains since it launched the offensive on June 12.

The Houthis have offered to hand over management of the port to the world body, according to the United Nations, but the coalition says the group must quit the western coast.