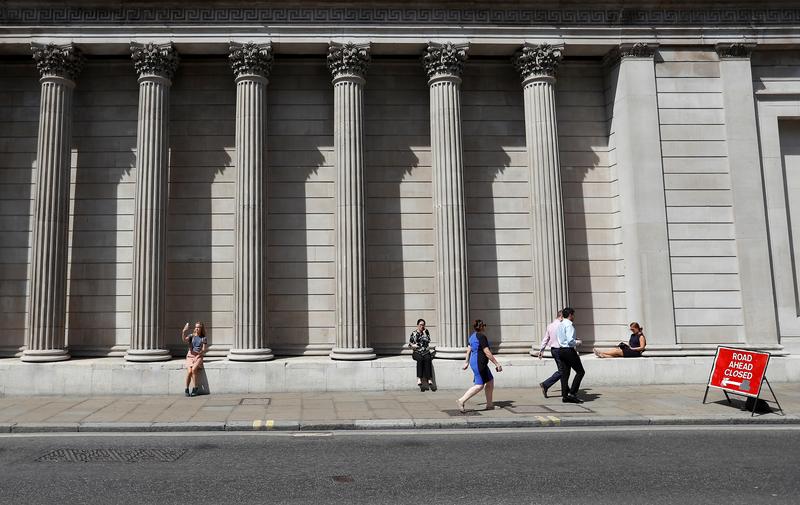 LONDON (Reuters) – The Bank of England raised interest rates on Thursday to 0.75 percent, their highest level since the financial crisis.

People walk past the Bank of England, in London, Britain August 1, 2018. REUTERS/Peter Nicholls

The bank, whose decision was unanimous, signalled it was in no hurry to raise them further with an uncertain Brexit on the horizon.

Below are comments from Bank of England Governor Mark Carney and other Monetary Policy Committee members:

Mark Carney: “With domestically-generated inflation building and the prospect of excess demand in the economy emerging, a modest tightening of monetary policy is now appropriate to return inflation to its 2 percent target, and to keep it there.”

“In this environment an ongoing limited and gradual tightening of monetary policy is likely to be required in order to return inflation sustainably to its target at a conventional horizon.

“Limited, because we think the structural factors that have pushed down the trend equilibrium real rate are likely to persist.

“And gradual, because we think the domestic short-term factors (particularly headwinds from uncertainty and fiscal drag) will fade slowly.

“As a result, r* can be expected to rise gradually. Policy needs to walk – not run – to stand still.”

Mark Carney: “If there is a major shift as a consequence of the Brexit negotiations, that is disinflationary, or creates a very extreme trade-off, such as the one we saw post-referendum, then that could have consequences for monetary policy.”

“There’s a wide range of Brexit outcomes, but in many of them, interest rates will be at least as high as they are today. So we don’t need to keep our powder dry for that.

“The mistake is to always wait, wait, wait, until you have perfect certainty because we don’t know when that higher degree of certainty is going to transpire.”

Mark Carney: “UK growth in the second quarter is estimated to rebounded as expected, consistent with the (Monetary Policy Comittee’s) judgement that the slowdown in the first quarter primarily reflected the weather, not the economic climate.”

“In the MPC’s latest expectations, conditioned on the gently rising path of interest rates implied by the market yield curve, UK demand is expected to grow at around its current pace.”

“Household consumption is expected to grow at a modest rate, broadly in line with real incomes.”

Deputy governor Ben Broadbent: “It’s clear that saving has fallen in the last two years since the referendum, and that is likely to be a feature of the data (…) but I think one should probably wait until they’re settled down to conclude that it’s definitely negative, that remains to be seen I think.”

Mark Carney: “The committee’s latest inflation projection is a little higher than in May, reflecting the effect of the recent rises in energy prices and the 2.5 percent depreciation of sterling. Such external factors could inject some volatility into the path for inflation in the near term.

“The bigger picture, however, remains one of external cost pressures easing, with the peak impact on inflation from the referendum-related fall in sterling now behind us, and domestic inflationary pressures continuing to build as slack is absorbed.”

Mark Carney: “The labour market is strong. Unemployment is at a 42 year low and is projected to fall a little further below the MPC’s estimate of its equilibrium rate. Both the employment rate and number of vacancies are at record highs, and job-to-job flows are back around pre-crisis levels.”

“We think that, particularly in the first quarter, the very weak productivity is an aberration”

Mark Carney: “What banks pay (…) in terms of returns, partly depends on what it costs them to borrow in international markets, and that had been very low at the time of the last rate increase. What’s happened from then until now is that those costs of borrowing (for UK banks) in international markets (…) have gone up, which should reinforce the pass through of this.”

Mark Carney: “There is some tentative evidence of tariffs having an impact on trade flows (…) but there is not yet that much evidence of an actual, a hit in business confidence as translated into less investment, I’m speaking globally, or big risk premia going into financial markets more broadly.”

“The UK can be affected by a trade war scenario and a sharp ramping up of tariffs and assymetric response, everybody responding with the U.S. at the centre. The main effects for the UK are these confidence effects and financial market effects so those really have to kick in for it to have a big impact.”

“We can understand how it could get worse … but we are not picking that up yet to a material degree, there is some in the forecast but not to a major degree.”

Reporting by UK bureau, compiled by Elisabeth O’Leary in Edinburgh