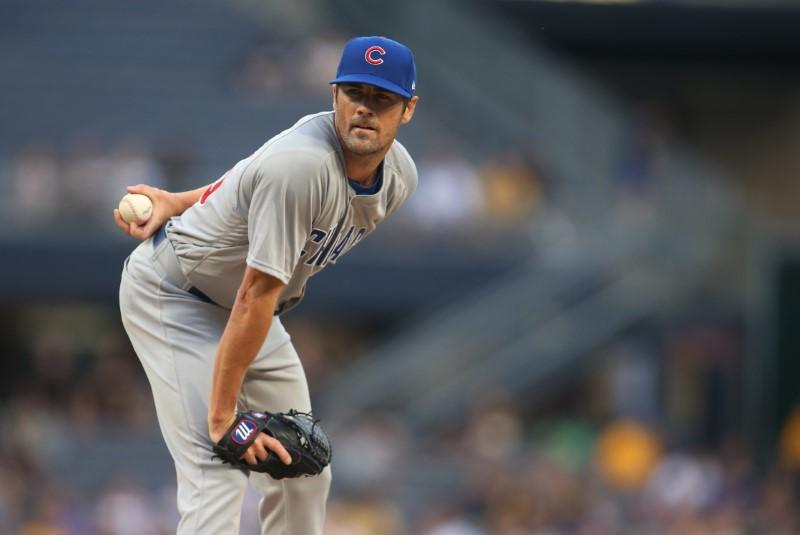 Cole Hamels, making his Cubs debut, struck out nine and gave up one unearned run in five innings Wednesday as Chicago clobbered the host Pittsburgh Pirates 9-2 to split a two-game series.

Willson Contreras hit his ninth homer for the Cubs, who pounded out 15 hits. Contreras, Jason Heyward and Ben Zobrist each had three hits.

Pittsburgh starter Nick Kingham (5-6) lasted one inning, giving up four runs (two earned) and three hits with a walk and a strikeout. He made 51 pitches.

The win was Oakland’s third in three days at home against the Blue Jays and seventh straight this season, capping Oakland’s first season-series sweep of seven or more games since going 7-0 against Baltimore in 2004.

Manaea (10-7) allowed one run on five hits in six-plus innings. He fanned five and walked two.

This game was much different from Tuesday’s series opener, when the Nationals crushed the Mets 25-4. Milone (1-0) allowed one run on three hits in his seven innings. The left-hander struck out nine without a walk and retired 13 of the final 14 batters he faced.

Ryan Madson took care of the eighth before Kelvin Herrera closed it for his 16th save.

Sonny Gray lasted 2 2/3 innings and was booed off the Yankee Stadium mound as New York fell to Baltimore.

Gray (8-8) tied a career high by allowing seven runs while also surrendering eight hits. It was the ninth time he has allowed seven runs and first instance since May 30, 2017, at Cleveland when he was with Oakland.

Trey Mancini and Renato Nunez each had three hits and knocked in two runs to lead the Orioles’ offense. Mancini homered, and Nunez had two doubles.

Willy Adames and Jake Bauers homered, and Tyler Glasnow had a strong debut with his new team in Tampa Bay’s win over Los Angeles at St. Petersburg, Fla.

Glasnow, who was acquired as part of a trade-deadline deal Tuesday that sent starting pitcher Chris Archer to the Pittsburgh Pirates, got the start Wednesday as part of the Rays’ bullpen-oriented approach. In three innings, he gave up one run on two hits.

Jacob Faria (4-3) took over for Glasnow to start the fourth inning and went 3 2/3 innings, allowing one run on four hits.

Rookie Austin Gomber (1-0), the third of six pitchers for St. Louis, earned his first career win with an inning of two-strikeout, one-walk work in the sixth.

Molina, Marcell Ozuna and Harrison Bader each had three hits for the Cardinals.

Fiers left the game after two innings with a left lower shin contusion. He was struck by a Mason Williams liner in the second and pitched to two more batters before departing.

Drew VerHagen (2-2) replaced Fiers and tossed three scoreless innings while getting credited with the victory. Shane Greene recorded the last three outs for his 23rd save.

Brad Hand pitched the final 1 2/3 innings, allowing only a bunt single to Jorge Polanco, to earn his 26th save of the season.

Carrasco (13-5) struck out 10 and didn’t walk a batter. He moved into a tie with CC Sabathia, Sam McDowell and Sonny Siebert for second-most games in Indians history with 10-plus strikeouts and no walks with three — behind Corey Kluber (10).

Jake Marisnick, recalled earlier in the day from Triple-A Fresno, and Max Stassi also went deep for the Astros, who began an eight-game trip by taking two of three from the Mariners. Teammate Evan Gattis went 3-for-5 with two doubles.

Alex Gordon began and ended a flurry of 10 unanswered runs over a four-inning span by Kansas City, who went on to win at Chicago for the second day in a row.

Gordon’s two-run double in the third gave the Royals the lead for good at 2-1. His two-run homer in the sixth capped the outburst by Kansas City, which reached double digits in runs scored for the seventh time this season. It also gave Gordon his first four-RBI game since Aug. 18, 2016.

The scheduled game between Miami and host Atlanta was postponed on Wednesday because of heavy rains that drenched most of the area near SunTrust Park all day and into the evening.