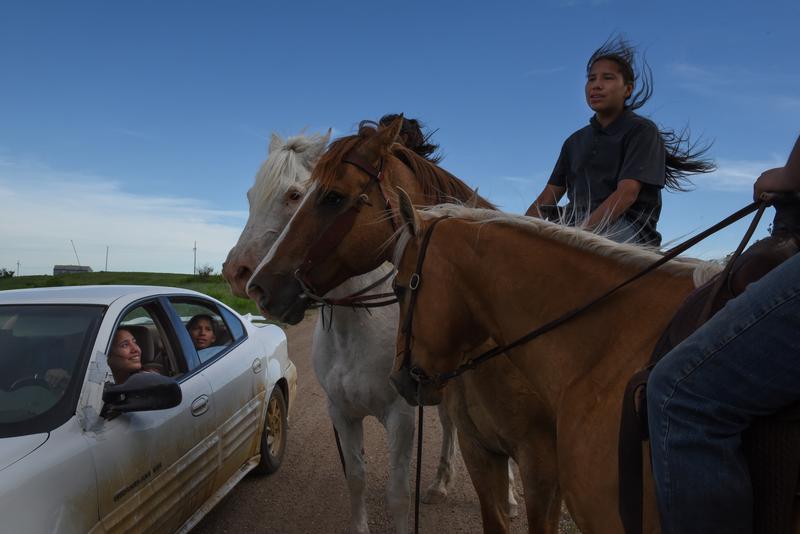 (Reuters) – Six weeks covering Native Americans at Standing Rock, North Dakota, protesting the Dakota Access oil pipeline presented a unique opportunity to get to know many of the people who took a stand there.

Angel Lookinghorse stops her car next to her brother, Jayden Lookinghorse riding his horse, on the Cheyenne River Reservation in Green Grass, South Dakota, U.S., May 30, 2018. REUTERS/Stephanie Keith

Lakota medicine man Ivan Lookinghorse from Cheyenne River Reservation south of Standing Rock Reservation was one of them.

In 2018, Ivan invited me on a ride by the Lakota (Sioux) people to mark the 150th anniversary of the Fort Laramie peace treaty between the Sioux Nation and United States government.

Under the treaty, the federal government recognized the Black Hills of the Dakota Territory as part of the Great Sioux Reservation and hostilities ended between the Sioux and white settlers.

The ride of some 400 miles (640 km) would start in mid-April at Green Grass, South Dakota, home to the spiritual leader of all the Lakota, Arvol Lookinghorse, Ivan’s brother. It would end in Fort Laramie, Wyoming, where the treaty was signed.

Getting to Cheyenne River Reservation and its main town, Eagle Butte, entailed flying to Rapid City, South Dakota, then driving three hours to Eagle Butte. Despite a snowstorm, Ivan was waiting to greet me.

The security team for the ride, some of whom had worked security at the protests, were with him. After Standing Rock, some of them moved down the Missouri River to the Lower Brule Reservation, where they “could live like their ancestors, except with Netflix,” Alton One Feather Sr. explained.

The next morning, Ivan, his friend Uma, the six-member security team and I drove the snow-packed roads to the tiny community of Green Grass.

Other organizers from the Standing Rock and Pine Ridge Reservations arrived. We climbed a hill and, hand in hand, formed a circle, turned to the four cardinal directions and shared a pipe while Ivan sang a Lakota song. Lakota ceremonies cannot be photographed or taped because they are sacred, so documenting various aspects of the ride could be difficult. Ivan said not to worry.

Some people brought horses in trailers. They said Arvol had 100 horses, some wild, some broken. He offered several to relatives and others for the ride. I would not be simultaneously riding and photographing so a car was also needed.

The Fort Laramie treaty riders pass by a sign post displaying the name of a ranch in Torrington, Wyoming, U.S., April 26, 2018. REUTERS/Stephanie Keith

Everyone reconvened at Arvol’s place early the next day. The sun glinted off snow-covered hills as the cadre of riders grew.

After a prayer, a motivational speech and song, the riders headed up a hill and out of sight. There was great pride among them.

“The treaty is kind of all we have,” said Wes Redday. “It’s what gives us what little we still have.”

The treaty is often fodder for conversations among the Lakota, many of whom say they are descended from one of the chiefs who signed it. Some even have a painting or photo of that chief.

“If you look deep, a lot of people are related to them. When our father was alive, when our grandfathers were alive, they kept it going, they talked about it in Lakota,” said Allen Flying By of the Standing Rock Reservation.

Horses, sacred to the Lakota, eat before people, so early each day they were fed and watered.

Dawn and dusk found riders and horses in a circle waiting to be “smudged.” A person would pass with sage, a sacred herb thought to cleanse, smoking in a coffee can lashed to a pole. Everyone pulled the smoke over themselves and the horses.

Afterwards a prayer, maybe a song. If it was morning, the riders would set out single file behind one rider carrying a sacred staff. At night, horses were corralled before dinner.

We rode from Green Grass through the Cheyenne River Reservation to a Native American settlement called Bridger. People in each community brought food for the riders. In Bridger, we ate fry bread, chicken soup and buffalo stew. Later, we rolled out sleeping bags at the community center.

The first stop outside the reservation was Wall, South Dakota, where the riders stayed in cold and rain for three days at muddy rodeo grounds behind budget hotels and an Interstate highway. Despite the bleakness, spirits were high.

The Cheyenne River Reservation cook, a salty man named Kermit, pitched a tent and cranked out meals, helped by a few rider volunteers. Others did what they called “Hollywood-ing,” got a shared hotel room where they could shower.

As it moved through Indian Country, the ride picked up Lakota, Dakota, Nakota, Arapaho and Cheyenne, all related tribes, all signers of the treaty. Some boys from Bridger joined with just the clothes on their backs.

Next stop: Pine Ridge Reservation, where so much has happened. In the shade of a tree, Dave Swallow explained, “We may be poor in the white man’s way but we are not poor in the Lakota, Dakota and Nakota ways because we are connected to this earth and connected to above and everywhere.”

For two nights in Pine Ridge, accommodations were a middle school gym and campsite beside a reservoir.

Moving on meant leaving “Lakota land” for Nebraska, where riders primarily rested on roadsides and relied on camp cooks for food.

Then one evening at a rest spot they found Santee Sioux from the Santee Reservation and Dakota from the Lake Traverse Reservation, known colloquially as Sisseton, waiting to join, and spirits soared. A ceremony honored them and those who had ridden so far.

As the sun set, smoke rose from two kitchens, the flags of various groups were displayed and their leaders spoke. Later, children played with lassos.

With Fort Laramie two days away, people excitedly wondered which other Native groups would be there and who would represent the federal government. There were ceremonies and drumming, tepees were pitched, people visited around fires.

Reaching Fort Laramie was a triumph given the long, arduous ride and momentous occasion being celebrated. Riders circled ceremonial tepees and crossed a river to the site of the signing.

But Harold Frazier, chairman of the Cheyenne River Reservation who rode almost the entire way, still felt disappointed that while Wyoming Senator John Barrasso attended no other federal senior officials were there.