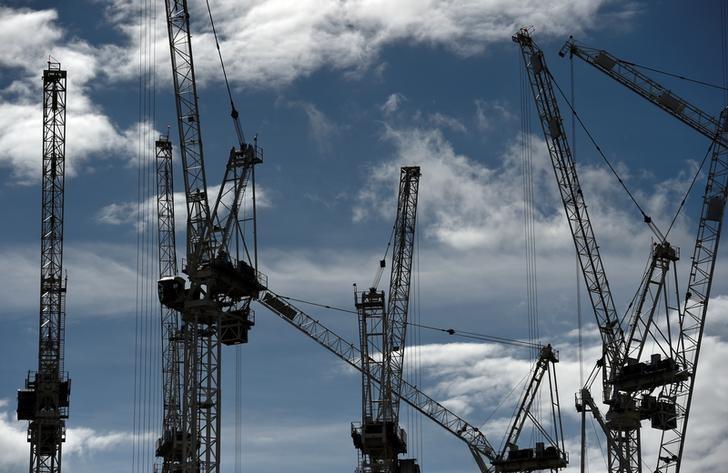 LONDON (Reuters) – Britain’s construction industry unexpectedly gained momentum last month to grow at its fastest rate in over a year, boosted by the biggest increase in housebuilding since the end of 2015, an industry survey showed on Thursday.

Just hours before the Bank of England is expected to raise interest rates for the only the second time since before the financial crisis, the IHS Markit/CIPS construction Purchasing Managers’ Index (PMI) rose to its highest since May 2017.

The PMI jumped to 55.8 from June’s reading of 53.1, beating all forecasts in a Reuters poll of economists that had predicted a slight slowdown in growth to 52.8.

The figures contrast with a more lacklustre reading for manufacturers on Wednesday, who were their most downbeat in nearly two years due to concerns about Brexit and the value of the pound.

Thursday’s construction PMI also showed some Brexit worries and higher costs for steel used in construction — a possible reflection of European Union tariffs imposed on steel imports to the bloc in response to U.S. tariffs.

Nonetheless, the overall tone from the construction industry was positive. New orders flowed in at the fastest rate since May 2017 and both house-building and employment in the sector rose by the most since December 2015.

The figures contrast with a weak start to 2018, when unusually icy weather hurt the sector, causing first-quarter output to fall by 0.8 percent according to official data.

“While the recent rebound in construction work has been flattered by its recovery from a low base earlier in 2018, there are also signs that underlying demand conditions have picked up this summer,” IHS Markit’s Moore said.

Last week the National House-Building Council reported year-on-year increases in housing starts in most of Britain during the three months to the end of June, though a sharp fall in London dragged down the national average.

– Detailed PMI data are only available under licence from IHS Markit and customers need to apply for a licence.