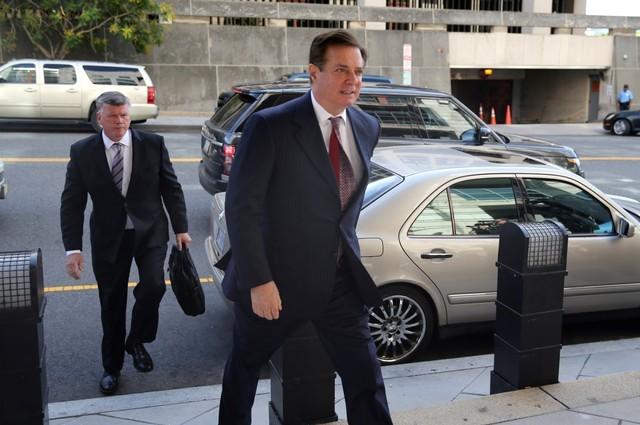 ALEXANDRIA, Va. (Reuters) – An accountant for U.S. President Donald Trump’s former campaign chairman Paul Manafort testified on Friday that she prepared his tax returns despite her concerns about the propriety of classifying money he transferred from overseas as loans.

U.S. District Judge T.S. Ellis asked the accountant, Cynthia Laporta, whether she was testifying under an immunity agreement with the government because she was concerned that she could be prosecuted. She answered, “Correct.”

Laporta testified she knew an accounting treatment for a loan was wrong when preparing Manafort’s tax return for 2014. “I very much regret it,” she told the courtroom.

Her testimony came on the trial’s fourth day as prosecutors sought to drive home their case that Manafort tried to hide millions of dollars he earned working for pro-Russian politicians in Ukraine. Manafort, 69, has pleaded not guilty to charges of bank fraud, tax fraud and failing to disclose foreign bank accounts.

The trial in federal court in Alexandria, Virginia, is the first arising from Special Counsel Robert Mueller’s investigation of Russia’s role in the 2016 U.S. election.

Both Laporta and fellow accountant Philip Ayliff, her predecessor who handled Manafort’s tax filings at the firm KWC, testified that they had no knowledge that Manafort controlled foreign bank accounts. Such accounts must be reported to tax authorities if they contain $10,000 or more.

Laporta said she asked Manafort directly about any such holdings and was told there were none.

Prosecutors have tried to make their case first by presenting testimony about Manafort’s lavish lifestyle and then detailing his financial maneuvering.

Defense attorneys have signaled they will seek to blame the financial charges against Manafort on his business partner Rick Gates, who was Trump’s deputy campaign chairman in the 2016 presidential election.

Laporta testified that Gates, in a conference call with her and another accountant at the firm, instructed them to alter a loan amount to lower Manafort’s tax bill because it was too high for Manafort to pay.

“Rick said it was too high” and that Manafort “didn’t have that money,” Laporta said in response questions by prosecutor Uzo Asonye.

Gates, who pleaded guilty in February to conspiracy and lying to the FBI, is cooperating with Mueller’s probe, and is expected to testify later in the trial.

The charges against Manafort largely pre-date the five months he worked for Trump, some of them as campaign chairman, during a pivotal period in the race for the White House.

Trial consultant Roy Futterman, who is following the trial but not involved in it, said, “The prosecution is doing a very good job of keeping a brisk pace, putting witnesses on for short direct examinations, keeping it lively and keeping very tight messages for each witness.”

Manafort’s defense attorneys do not seem to have scored a lot of points on cross-examination, Futterman said, but added that the witnesses who have testified so far are not “the main targets.”

Prosecutors asked Ayliff about Manafort’s accounting of a $1.5 million transfer in 2012 from Peranova Holdings Ltd as a loan, even as records showed that no interest or principal was paid on it in subsequent years. Peranova is one of numerous Cypriot entities that prosecutors have said Manafort controlled.

Ayliff testified that KWC did not know Manafort controlled Peranova, and that if the transfer was a payment related to his consulting work it would have been treated as income – not as a loan – on his tax returns.

Kevin Downing, Manafort’s attorney, signaled on Friday that his defense strategy might also involve raising questions about whether Manafort in fact had willfully deceived his accountants.

One way to do that could be to show that documents Manafort had provided to the accountant contained details about foreign bank accounts.

“Only a fool would give that information to his accountant if he was trying to conceal it from the IRS,” Downing said, referring to whether the accountant had names of the Cyprus-based entities in his files and had retained them for his records.

Late on Thursday, Manafort filed an objection to the government’s bid to block his legal team from raising the fact that he and his companies were never audited by the IRS. Mueller’s team has argued that any such civil action is separate from the criminal charges at hand.

Reporting by Sarah N. Lynch and Nathan Layne in Alexandria, Virginia; additional reporting by Karen Freifeld and Susan Heavey; Writing by Warren Strobel; Editing by Will Dunham and Steve Orlofsky