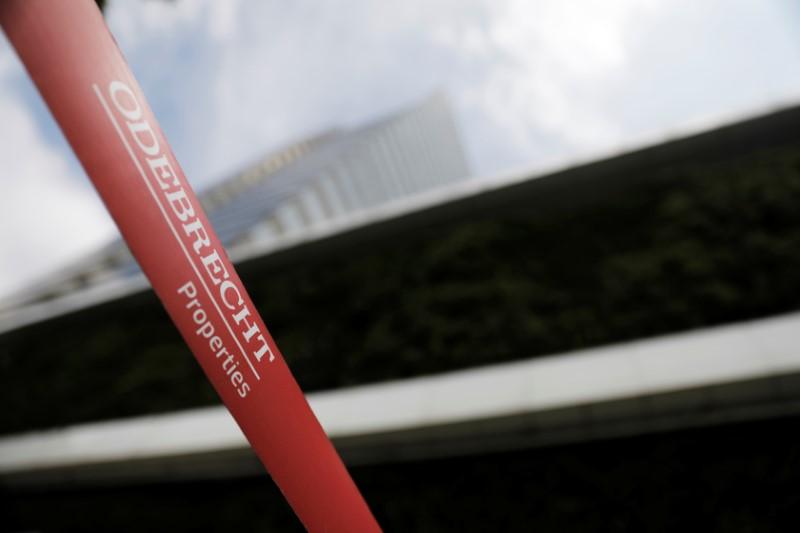 The corporate logo of the Odebrecht SA construction conglomerate is pictured at its headquarters in Sao Paulo, Brazil April 9, 2018. REUTERS/Nacho Doce/File Photo

Luis Guillermo Velez, director of the State Legal Agency, which defends the government in any lawsuits, told Reuters that Odebrecht has accused Colombia of violating an Investment Protection Treaty signed with Spain, allowing it to make the demand through its Spanish unit.

“They claim there is a series of acts by the Colombian state that have violated international law and that have generated an expropriation situation, and request compensation of 3.8 billion pesos,” said Velez, stating that Odebrecht wants to settle the case before an international arbitration tribunal.

“Colombia is evaluating the situation and preparing its defense,” Velez said.

The Odebrecht office in Colombia did not answer telephone calls from Reuters seeking more details about the case.

Odebrecht was awarded a contract in Colombia for the construction of a 528-kilometer (328-mile) highway in 2010, with an investment of more than $1 billion dollars. Four years later it signed a contract for an additional parallel road.

The Brazilian company also had an $850 million contract in a consortium to make the Magdalena River more navigable.

The contracts were scrapped by the Colombian government when an investigation uncovered bribes had allegedly been paid.

According to the attorney general’s office, bribes paid in Colombia by Odebrecht amount to more than $27 million. Odebrecht has admitted paying bribes.

Eight people involved in the corruption scandal have been jailed in Colombia, including an ex-senator and a former transport minister.

Odebrecht’s bribes spilled over into the election campaigns of President Juan Manuel Santos, who last year acknowledged that his 2010 election campaign received illegal payments. He said he had no knowledge at the time of the payments.