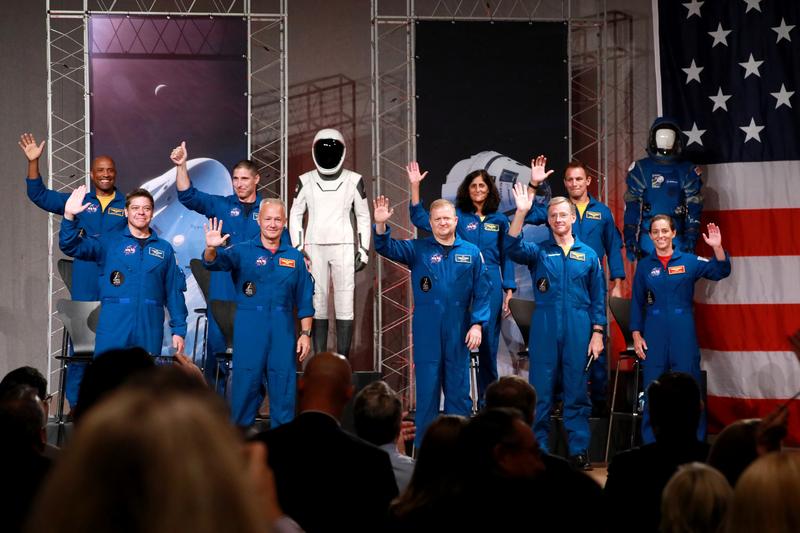 (Reuters) – NASA on Friday named nine astronauts for the first manned space launches from U.S. soil since the space shuttle program ended in 2011.

The National Aeronautics and Space Administration’s announcement signals a milestone in the U.S. space program, with its shift to the private sector for ferrying cargo and astronauts to the International Space Station.

Since the space shuttle program was shut down, the U.S. space agency NASA has had to rely on Russia to fly astronauts to space station, a $100 billion orbital research laboratory that flies about 250 miles (402 km) above Earth.

The astronauts named on Friday will be carried aloft aboard spacecraft developed by entrepreneur Elon Musk’s SpaceX and Boeing Co, crewing first the test flights, and then missions involving both Boeing’s CST-100 Starliner and SpaceX’s Crew Dragon.

The first flight is expected sometime next year.

“Space has transformed the American way of life,” NASA Administrator Jim Bridenstine said at the Johnson Space Center in Houston. “For the first time since 2011, we are on the brink of launching American astronauts on American rockets from American soil.”

The commercial crew program will allow expanded use of the space station. NASA officials have said it is critical to understanding the challenges of long-duration spaceflight and necessary for a sustainable presence on the Moon and for deep-space missions, including to Mars.

In 2014, SpaceX and Boeing received contracts for $2.6 billion and $4.2 billion, respectively, to develop so-called space taxis that can ferry astronauts to and from the space station.

Of the nine astronauts tapped to serve as crew members, all but three are space flight veterans. Additional crew members will be assigned by NASA’s international partners in the space station at a later date, the agency said.

The Government Accountability Office said last month that launch plans could be delayed due to incomplete safety measures and accountability issues in NASA’s commercial crew program.