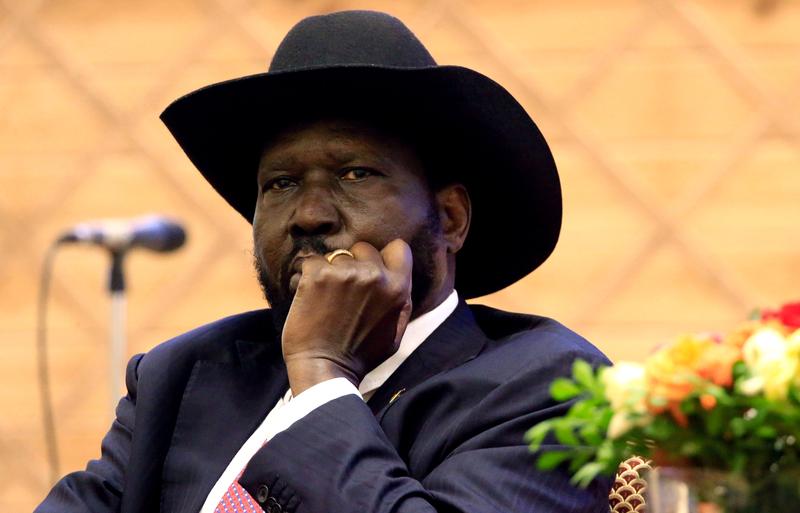 JUBA (Reuters) – South Sudan’s President Salva Kiir said on Friday he believed the new peace deal between his government and the main rebel group would not collapse because it was not forced upon them like previous accords.

FILE PHOTO: South Sudan President Salva Kiir attends the signing of a peace agreement with the South Sudan rebels aimed to end a war in which tens of thousands of people have been killed, in Khartoum, Sudan June 27, 2018. REUTERS/Mohamed Nureldin Abdallah/File Photo

At a news conference in Juba, Kiir said he would travel to Khartoum to sign the agreement at the ceremony on Sunday. His arch foe Riek Machar, leader of the SPLM-IO rebel group which has fought Kiir’s forces intermittently since 2013, is also expected to attend.

Fueled by personal and ethnic rivalries, the conflict has killed tens of thousands, displaced an estimated quarter of South Sudan’s population of 12 million and ruined its economy that heavily relies on crude oil production.

Previous peace agreements, the most recent in 2015, held for only a matter of months before fighting resumed. Kiir put this down to external influences. Both the 2015 and the 2018 agreements were mediated by Sudan and other east African nations.

“The 2015 (deal) was forced on us, we were not given the opportunity to express our desire. This is why when I came sign… I gave my reservations,” Kiir said.

“People didn’t take me seriously until the agreement collapsed in their face.” But the new deal would not suffer the same fate, Kiir told reporters.

Negotiations for the peace deal had been completed and any outstanding issues with his opponents would be settled after signing of the deal, Kiir said.

The conflict has also been driven by ethnic divisions — Kiir and Machar come from Dinka and Nuer ethnic groups respectively.

Some smaller opposition groups have expressed doubts over the new deal. The SPLM has said it contains several shortfalls, including a “serious lack of consistency in allocating power-sharing ratios at all levels of governance”.

Kiir’s side will take 20 slots in the new 35-member government, while Machar’s SPLM-IO and other smaller opposition groups will take the rest.

“I am going to sign,” Kiir told journalists. “The agreement is in place and we will remain committed … and will implement (it),” he said.