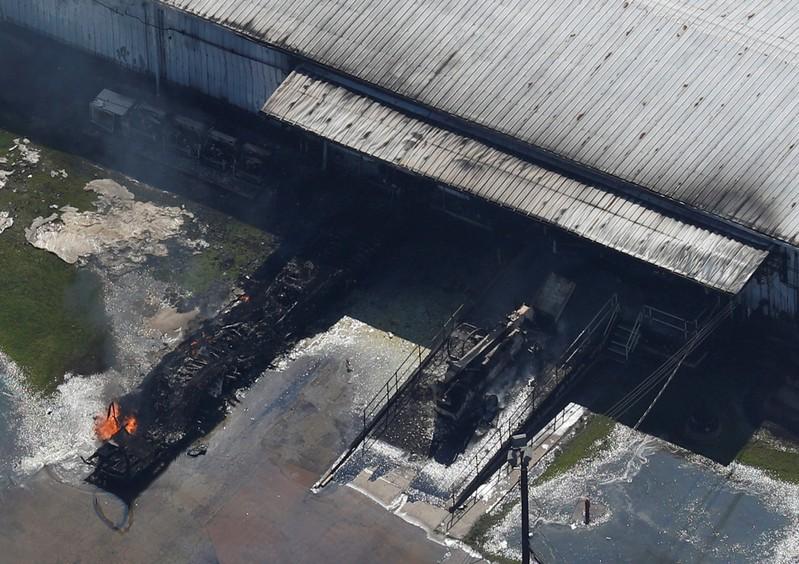 HOUSTON (Reuters) – A Texas grand jury on Friday indicted chemicals manufacturer Arkema North America and two of its executives for releasing emissions that allegedly endangered the public after a 2017 hurricane.

The U.S. arm of the French chemicals firm, its Chief Executive Richard Rowe and the manager of its Crosby, Texas, manufacturing plant, Leslie Comardelle, are charged with the “reckless” release of a toxic cloud last September, prosecutors said.

The two executives are expected to appear in a Houston court on Monday.

The plant became waterlogged and lost power needed to keep volatile chemicals cooled after Hurricane Harvey dumped more than 50 inches of rain on the area. Company workers left the plant and officials evacuated residents within a 1-1/2-mile (2.4-km) radius of the facility after some containers heated and caught fire.

The containers, which each held around 500,000 pounds of organic peroxides, burned for days, leading to a controlled burn of the remaining chemical containers that had not then ignited on their own.

Twenty-one people sought treatment for exposure to fumes from the blaze, and the company was sued by first responders assigned to keep local residents from entering the area. The lawsuits alleged “serious bodily injuries” from inhaled smoke.

The disaster could and should have been prevented, prosecutors said, alleging the company was more concerned about profit than protecting local residents.

The criminal charges are “astonishing,” in light of an eight-month review of the incident by the U.S. Chemical Safety and Hazard Investigation Board (CSB) that found the company had “behaved responsibly,” Arkema said in a statement on its website.

“It is outrageous to assert that Arkema or any of its employees behaved criminally. No one needs a reminder that Hurricane Harvey devastated a wide region,” the company added. “Arkema employees in Crosby performed heroically before and during Hurricane Harvey.”

The CSB, which has no enforcement or regulatory powers but makes safety recommendations after studying disasters, found a lack of planning for severe weather and called for plans to avoid future flood risks and for the use of multiple, redundant systems for storing chemicals.

If convicted on the endangerment charge, the executives could face up to five years in jail and the company could be hit with a fine of up to $1 million.

“Companies don’t make decisions, people do,” Harris County District Attorney Kim Ogg said in a statement. “Those who poison our environment will be prosecuted when the evidence justifies it.”

Rusty Hardin, a Houston attorney who represents Arkema, called the criminal charge “unprecedented” and said the company and its executives were victims of a unforeseeable weather.

“It would set an ominous precedent if a company could be held criminally liable for impact suffered as a result of the historic flooding,” said Hardin. “There’s no foundation for a criminal case against Arkema.”