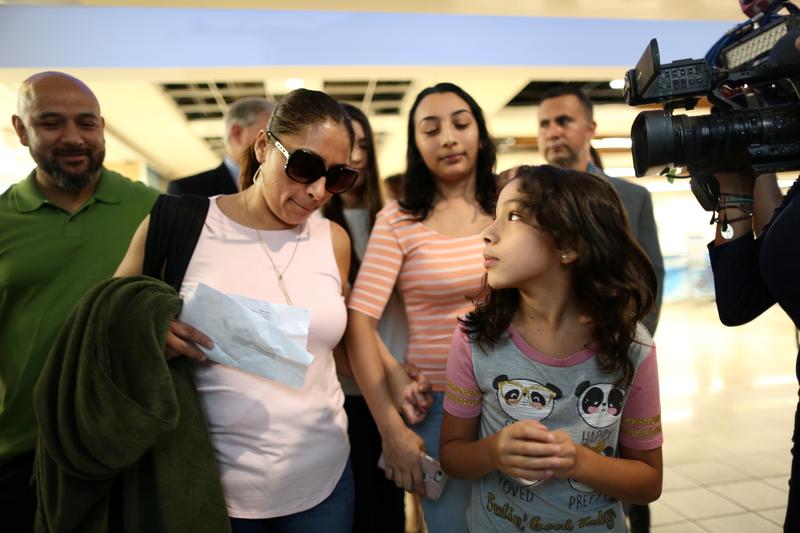 ORLANDO, Florida (Reuters) – The U.S. government deported a Mexican woman on Friday who had lived in the country illegally for nearly two decades despite efforts by lawmakers to keep her in Florida with her husband, a Marine Corps veteran, and her two American children.

Alejandra Juarez walks with her two daughters, Pamela, 16, and Estela, 9, and her husband, former U.S. Marine Temo Juarez, all U.S. citizens, to the departure gates at Orlando International Airport for her deportation flight to Mexico, in Orlando, Florida, U.S., August 3, 2018. REUTERS/Joey Roulette

Alejandra Juarez, 38, was joined by her family and her congressman, Darren Soto, at Orlando International Airport for tearful farewells before her flight back to Mexico.

Juarez sought to illegally enter the United States in 1998 and was ordered to be removed, precluding her future chances at getting a visa or becoming a citizen, according to Soto and media interviews Juarez has given.

She illegally re-entered the country in 2000, the same year she married Temo Juarez, a Mexico native who went on to serve in the war in Iraq with the U.S. Marines and is now a naturalized U.S. citizen.

After being discovered in the country during a 2013 traffic stop, she had been required to check in every six months with U.S. Immigration and Customs Enforcement (ICE) officials.

Her lawyers said to reporters she was only now being deported because of U.S. Donald Trump’s “zero tolerance” policy on illegal immigration.

ICE, which did not respond to questions on Friday, has said that Juarez’s re-entry after her removal is considered a felony.

“Mr President, you deporting me is not going to hurt just me; you’re making a veteran suffer,” Alejandra Juarez said at the airport. “You always say you love veterans. If you really love veterans, why didn’t you pardon me?”

Her husband has told reporters that he voted for Trump in the 2016 election.

Trump’s Democratic predecessor, Barack Obama, was criticized by immigrant groups for deporting scores of non-citizen U.S. military veterans and for deporting immigrants whose only crime was re-entering the country after an earlier removal order.

Under new guidelines issued by the Obama administration in 2014, however, Juarez was considered a low priority for removal, her lawyers said.

Trump, a Republican, broadened ICE’s focus within days of taking office in 2017, saying no immigrants should be considered exempt from law enforcement.

Soto, a Democratic congressman, has sponsored a so-called private bill that would grant Juarez a visa if passed, a last-ditch, frequently unsuccessful recourse for immigrants who have exhausted other avenues.

Juarez has said her youngest daughter, who is nine years old, will come to live with her in Mexico because her husband frequently travels for his work running a flooring business.