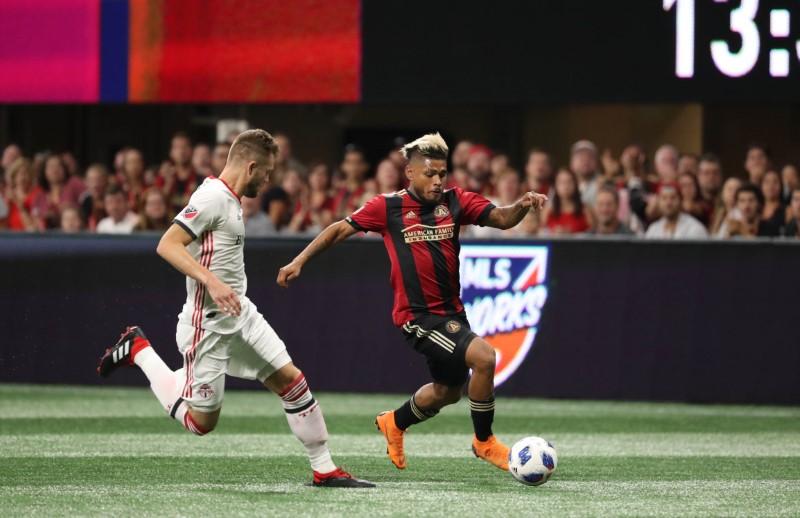 Atlanta United controlled the match for most of the second half, but a late run by Toronto FC made things even. Ricketts took a cross from Jonathan Osorio after the 90th minute and converted on a sliding shot well out of the reach of Atlanta FC goalkeeper Brad Guzan.

Tempers escalated at the final whistle as Toronto FC defender Chris Mavinga was given a red card for a shove to the head of Leandro Gonzalez Pirez and could be facing additional league discipline.

Martinez connected on his 25th and 26th goals, moving him one away from the MLS single-season record of 27 held by three players. Roy Lassiter did it for Tampa Bay in 1996, Chris Wondolowski matched it for San Jose in 2012 and Bradley Wright-Phillips also did for the New York Red Bulls in 2014.

Atlanta FC (14-4-6, 48 points) increased its Supporters’ Shield lead and closed in on Toronto FC’s record for points in a season at 69 set last season. Atlanta FC is also unbeaten in its last five MLS matches and has lost just once in its last 12.

Sebastian Giovinco scored a goal in first-half extra time for Toronto FC (6-11-5, 23 points), which entered on a two-match winning streak. Giovinco had a chance to tie the match in the 88th minute but his shot bounced off the crossbar.

Trailing 1-0 early in the second half, Martinez earned a penalty when he was fouled by Toronto goalkeeper Alex Bono after his close-range shot was saved. Martinez converted the penalty in the 53rd minute with a shot to the low left corner of the goal.

Atlanta FC grabbed the lead in the 67th minute when Martinez put a glancing header past Bono off a pass from Hector Villalba. Martinez, who scored the only goal for the MLS All-Stars on Wednesday against Juventus, was subbed off in the 80th minute.

Bono kept Toronto FC in the match with some key saves. He stopped a point-blank shot from Martinez in the 38th minute and made a diving save on Miguel Almiron in the 85th minute.

All three regular-season matches between the teams in the last two seasons have finished in a 2-2 tie. They will meet again at Toronto on the final day of the regular season.