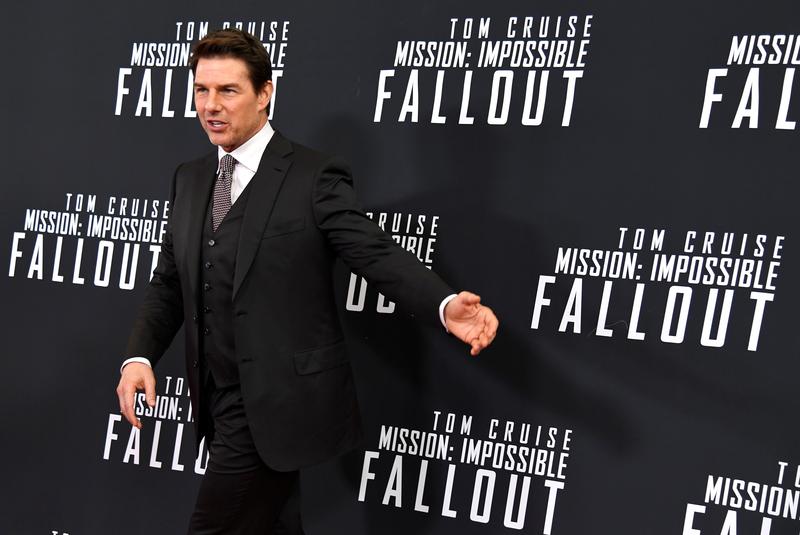 Actor Tom Cruise gestures as he arrives on the red carpet for the premiere of Mission:Impossible-Fallout, at the Smithsonian’s National Air and Space Museum, in Washington, U.S., July 22, 2018. REUTERS/Mike Theiler

“Mission: Impossible – Fallout” generated $35 million from 4,395 locations in its sophomore frame, while Disney’s “Christopher Robin” opened at the lower end of forecasts with $25 million from 3,602 screens.

The sixth installment of the Tom Cruise spy series remains No. 1 at the box office, pocketing $124 million in North America to date. Overseas, it has amassed over $205 million. It opens in China on Aug. 31.

“Christopher Robin,” Disney’s live-action adaptation based on characters from Winnie the Pooh, picked up an additional $4.8 million internationally for a global start of $29.5 million. The movie, which carries a $75 million production budget, has garnered mixed reviews. As expected, families made up 60 percent of audiences, while 56 percent of moviegoers were female.

Actor Tom Cruise (L) and film director Christopher McQuarrie pose for photographers on the red carpet at the premiere of Mission:Impossible-Fallout, at the Smithsonian’s National Air and Space Museum, in Washington, U.S., July 22, 2018. REUTERS/Mike Theiler

“We believe this is a solid start for this film,” Cathleen Taff, Disney’s head of theatrical distribution, said. “We think this movie will have legs. We don’t have a lot of family film competition behind us.” Ewan McGregor stars as the eponymous Christopher Robin, while Jim Cummings returns to voice Winnie the Pooh and Tigger, and Brad Garrett joins as Eeyore. Marc Forster directed “Christopher Robin” from a screenplay by Alex Ross Perry and Allison Schroeder.

Newcomer “The Darkest Minds” earned $5.7 million when it launched on 3,127 screens. Fox’s YA dystopian thriller is battling a bleak 19 percent average on Rotten Tomatoes, though audiences seem slightly more enthusiastic with a B CinemaScore. Jennifer Yuh Nelson, who had a hand in “Kung Fu Panda” and helmed its two sequels, made her live-action directorial debut. Amandla Stenberg, Mandy Moore and Gwendoline Christie round out the cast.

The final wide release, Dinesh D’Souza’s “Death of a Nation,” made $2.3 million on 1,032 screens. The documentary, currently has a 0 percent rating on Rotten Tomatoes, is the lowest wide release to date for the right-wing conservative filmmaker. D’Souza’s last movie was “Hillary’s America: The Secret History of the Democratic Party,” which made $13 million. His first, “2016 Obama’s America,” topped out with $33 million.

Universal’s “Mamma Mia: Here We Go Again” landed in fourth with $9 million for a domestic tally of $91 million. Sony’s “The Equalizer 2” rounded out the top five, picking up $8.7 million. In three weeks, the Denzel Washington-led sequel has earned $79 million.

Meanwhile, Disney’s “Black Panther” reached a massive milestone. The Marvel tentpole — starring Chadwick Boseman and directed by Ryan Coogler — crossed $700 million at the domestic box office, one of three films to hit that mark. Worldwide, the movie has grossed $1.3 billion.

“We’re in awe at the power of this film since February,” Taff said. “It speaks to the incredible storytelling of Kevin Feige and Marvel.”

Elsewhere at the box office, Bo Burnham’s “Eighth Grade” earned $2.8 million when it expanded nationwide. A24’s coming-of-age comedy starring Elsie Fisher began its limited run with the best-per-screen average of the year and has since picked up $6.5 million.

Another A24 title, “Never Goin’ Back,” opened with $10,000 on just two screens. The stoner comedy, which debuted at the Sundance Film Festival, stars Mia Mitchell, Camila Morrone and “Saturday Night Live’s” Kyle Mooney.

Filmrise’s “The Miseducation of Cameron Post” nabbed the highest per-theater-average of the week. The romance drama, led by Chloe Grace Moretz, took in $53,000 when it opened on two screens for a solid average of $26,500.