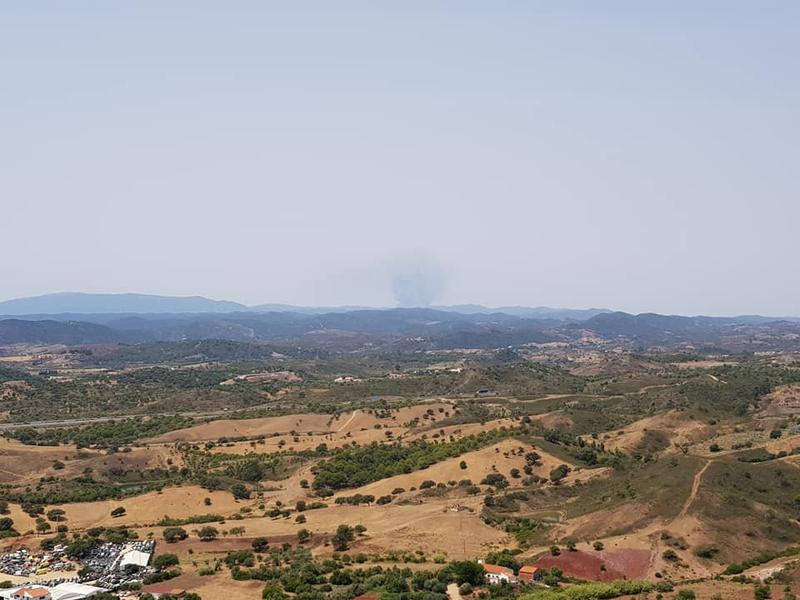 LISBON (Reuters) – Temperatures in Portugal, at the crest of a European heatwave, began to ease from near record levels on Sunday, but a forest fire raged for a third day in the south, battled by 800 firefighters and 12 aircraft.

The heatwave has brought drought and wildfires to Europe from Greece, where 91 people died in a fire in July, to Sweden. In parts of Portugal temperatures climbed to nearly 47 degrees Celsius on Thursday and Saturday, just off the country’s record of 47.3C and Europe’s high of 48C set in Athens in 1977.

Flames have consumed more than 1,000 hectares of forest, an area the size of over 1,200 soccer fields, in the hilly Monchique area in the southern Algarve region popular with tourists. Authorities deployed 130 soldiers to help with the efforts.

“It’s a terrible setting and considering the weather conditions it will not get better today,” said civil protection commander Col. Manuel Cordeiro.

Wildfires last year killed 114 people in Portugal’s worst such tragedy on record and authorities were this time quick to evacuate more than 100 people from several villages around Monchique. TV footage showed burned out cars and charred buildings the villagers had left behind.

Six people were hurt while trying to escape another blaze in Estremoz near the Spanish border on Saturday, authorities said. That blaze has since been put out.

Firefighters from Portugal and Spain were battling a fire which had engulfed dry trees and shrubs near Badajoz in southwestern Spain and Spanish authorities issued a warning that the entire southern region of Extremadura is at an extreme risk of wildfires.

In Lisbon, the temperature hit a record 44C on Saturday, almost emptying the city streets normally teeming with tourists. The weather service IPMA predicted 42C in the capital on Sunday and a maximum of 44C in the central-east interior. Most regions remain on red alert for fires and heat stroke until Monday. By Tuesday, the temperature is expected to drop below 40C.

Hot air from North Africa has caused the most severe heatwave in Iberia since 2003, one of the worst years on record for forest fires.

The longest drought in decades has been drying out rivers in the Netherlands. Wheat fields have been devastated across northern Europe, driving up prices.

In France, high temperatures registered in the Rhone and Rhine rivers, from which three nuclear power plants pump their water for cooling, led to a temporary shutdown of four reactors.

Three men died last week in Spain as a result of soaring temperatures, two in the southeastern region of Murcia and one in Barcelona, emergency services said. Two people were injured and six homes damaged in a forest fire near Madrid on Friday.

In Sweden, July was a record hot month and wildfires burnt in parts of the country. Authorities on both sides of the Baltic Sea, in Sweden and Poland, have warned against swimming due to a huge bloom of toxic algae spreading because of hot temperatures.