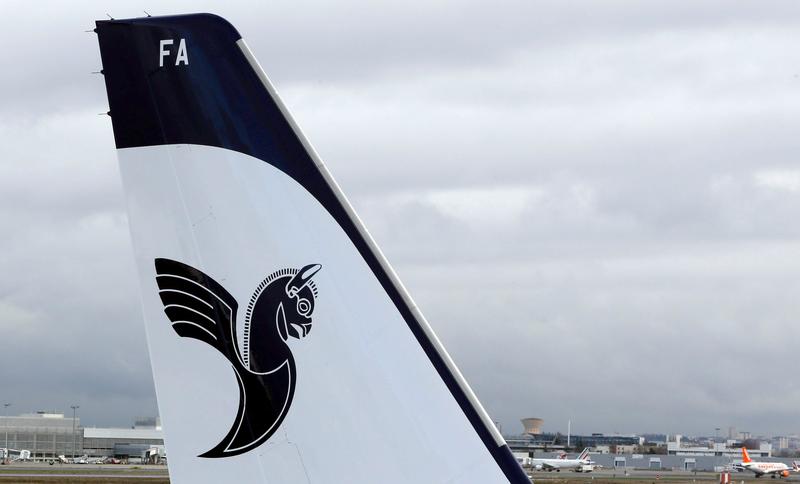 FILE PHOTO: A logo of IranAir is pictured on an Airbus A321 as the company takes delivery of the first new Western jet under an international sanctions deal in Colomiers, near Toulouse, France, January 11, 2017. REUTERS/Regis Duvignau/File Photo

All five new ATR 72-600 planes landed in Tehran’s Mehrabad airport after leaving Toulouse, France, where they were built, and refueling in Urmia in northwestern Iran, the Iranian news agency IRNA reported.

U.S. President Donald Trump’s decision in May to pull the United States out of a 2015 deal requires most companies to complete ongoing business with Iran before U.S. sanctions are reimposed after a wind-down period which expires on Aug. 6.

ATR – co-owned by Airbus and Italy’s Leonardo – has been pressing U.S. authorities to allow it to deliver aircraft it built for Iran.

FILE PHOTO: The logos of Airbus group and IranAir are pictured the company IranAir takes delivery of the first new Western jet, an Airbus A321, under an international sanctions deal in Colomiers, near Toulouse, France, January 11, 2017. REUTERS/Regis Duvignau/File Photo

After the signing of the accord to reopen trade links in return for Tehran curbing its nuclear activities, IranAir ordered a total of 200 aircraft from Western planemakers including 20 from ATR, which is based in Toulouse, France.

But few have been delivered and planemakers say they are unable to use the wind-down period because Washington has also revoked export licenses needed by all Western planemakers due to their heavy use of U.S. parts.

ATR – which had delivered 8 planes to Iran under the deal and started building another 12 – has been lobbying the U.S. Treasury to allow it to take advantage of the normal wind-down period for Iran business by giving it temporary new licenses.

Asghar Fakhrieh-Kashan, an adviser to Iran’s transport minister, was quoted by the semi-official news agency ILNA as saying that Iran had paid for the five planes on Friday, a day before the planes left France.

“The delivery of these five aircraft is a sign of Europe’s commitment to the nuclear accord,” Fakhrieh-Kashan told ILNA.

FILE PHOTO: An Airbus A321 with the description “IranAir” is pictured on the tarmac in Colomiers near Toulouse, France, January 11, 2017. REUTERS/Regis Duvignau/File Photo

ATR declined to comment on Saturday. Industry sources said the final number of planes to be delivered would be known in coming days.

The U.S. decision on Iran has raised question marks over whether ATR can reach a target of stabilizing annual deliveries at 80 aircraft in 2018.

The planemaker has said it will suffer financial damage if it cannot deliver the aircraft it has already produced following earlier U.S. approvals, and is looking for alternative buyers.

Airbus said last month it would not attempt to deliver any more planes to Iran in the wind-down period. It has delivered just three of 100 ordered by IranAir.

Boeing, which had sold 80 jets to IranAir under the 2015 nuclear deal, does not plan any deliveries. Unlike the European firms, it never placed the Iranian deal in its official order book on the grounds that it never received a deposit.