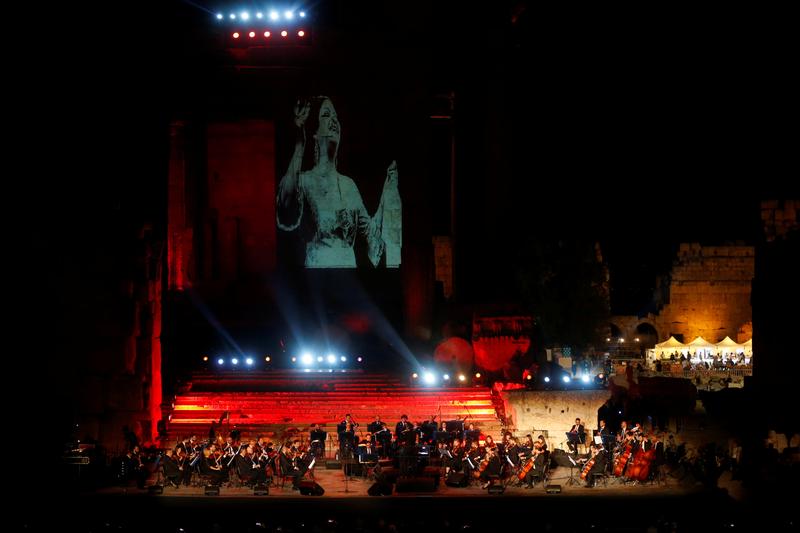 BEIRUT (Reuters) – Shakira and Elton played one-off concerts in Lebanon in recent months but the summer music festivals that helped make the country a cultural lodestar for the Arab world are struggling.

In the 1960s and 1970s, jazz legends such as Ella Fitzgerald, Nina Simone and Miles Davis, and the greatest Arab singers, Um Kulthoum and Fairouz, performed at ruined Roman temples during the Baalbek festival or at pretty seaside towns.

Elite tourists from the Gulf came to watch and spend big in the country and the festivals helped bring ordinary Lebanese people together.

That pre-war heyday is long gone.

“We worry that we will get to the point where we cannot go on,” said Nora Jumblatt, head of the Beiteddine Art Festival.

While this year’s festivals are putting some well known singers on stage, regional instability, Lebanon’s economic malaise and a funding crunch have hit organizers.

Years of political sclerosis have played havoc with fiscal policy, aggravating one of the world’s highest rates of public debt. As the government began tightening its belt, it cut subsidies for festivals and increased the taxes they pay.

“We call on the Lebanese government not to reduce its help, not to increase taxes,” said Nayla De Freij, chairwoman of the Baalbek International Festival.

Gradual economic decline has hit private sponsorship. And fear of the Syria war spilling over, as well as Lebanon’s growing entanglement in a power struggle between Iran and Saudi Arabia, have kept away Gulf tourists.

But after a deal in 2016 that led to the first parliament elections for nine years in May, and as warfare in Syria has moved away from Lebanon’s borders, politicians have started to speak of recovery.

“Today we are at a crossroads in Lebanon. We are starting to move towards rebuilding infrastructure in Lebanon and at the same time its economic vision is being formed,” said caretaker economy minister Raed Khoury.

Whether that can help the festivals, or bring back Gulf tourists, is uncertain. The main winners in May’s elections were allies of the Iran-backed Hezbollah – which Gulf states see as a terrorist group and a threat to their citizens.

“What affected us is the absence of all the Arab brothers who came from their countries. We used to get a very big number and some of them used to fly in to watch one concert,” said Elham Kallab, head of the cultural board of Byblos International Festival.

The Byblos festival takes place on the ancient city’s seafront, near the old city, with its Phoenician temple, Roman theater, Crusader castle and winding souk.

“The stage, with the Mediterranean in front of it, and dozens of civilizations behind it, when we stand and look at it, we feel so much pride to be in Byblos,” said Kallab.

The stage of the Baalbek International Festival – Lebanon’s oldest having been started in 1956 – is even more spectacular, wedged between the temples of Jupiter and Bacchus, among the largest and best preserved Roman temples in the world.

But it, too, faces economic pressures. Like the other festivals, its revenue comes from ticket sales, sponsorship and government subsidy – all under pressure.

“There are challenges and we have to fight, but it’s very important that we preserve the standard of the festival,” said De Freij.

Festival organizers – and many politicians – see the events as important not only for the tourists they bring but because they portray Lebanon as a safe, stable and attractive place to visit.

“They show this open, cultural image of Lebanon to the world,” said Jumblatt, recalling the first Beiteddine festival during the civil war year of 1986 as an event that brought people together.

That festival takes place in the elegant Ottoman-era palace of Beiteddine located in the Chouf mountains, where her husband Walid Jumblatt is a major dynastic political leader.

But for all their importance to the tourism sector and even, for some people, to Lebanon’s image of itself, the festivals remain in difficulty.

“I don’t want to be pessimistic, but this year is the toughest for the festivals yet,” said Zalfa Bouez, head of the Zouk Mikael International Festival.