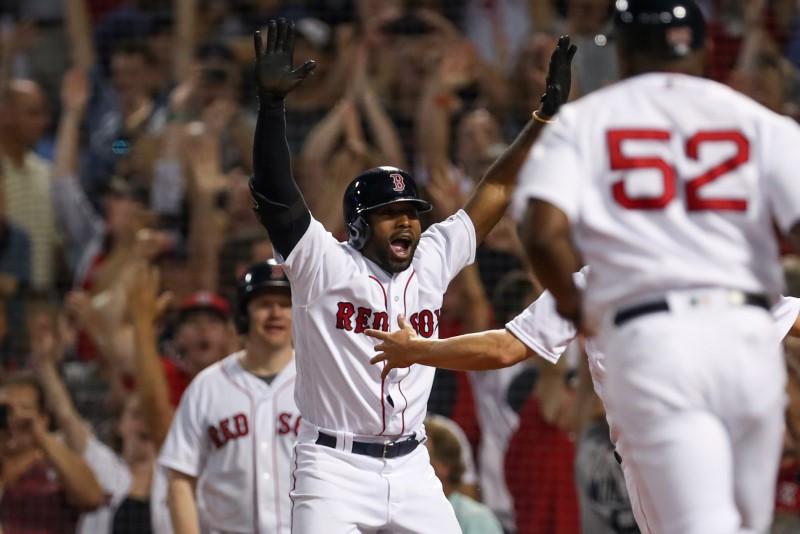 Jackie Bradley Jr. scored the tying run on a throwing error by third baseman Miguel Andujar with two outs in the ninth inning, and Andrew Benintendi hit a game-winning single with two outs in the 10th as the Boston Red Sox beat the New York Yankees 5-4 Sunday night, completing a four-game sweep at Fenway Park.

It appeared the Yankees were going to hold on for the win, but Andujar did not set himself and bounced the throw to first baseman Greg Bird on a ground ball by Xander Bogaerts, and Bradley scored from second.

In the 10th, Sandy Leon singled off Jonathan Holder (1-3) and took second on a wild pitch. The Yankees then intentionally walked Mookie Betts. Benintendi capped the four-hour, 39-minute marathon by chopping a single up the middle as pinch runner Tony Renda scored.

Asdrubal Cabrera hit a two-run homer in the bottom of the eighth inning, and Philadelphia defeated Miami to complete a four-game sweep.

The Marlins had tied the game in the seventh on a two-run homer by Derek Dietrich and a solo shot by Justin Bour two outs later.

After Pat Neshek (1-0) was perfect in the top of the eighth for Philadelphia, Nick Williams led off the bottom of the eighth with a single against Drew Steckenrider (3-2). One out later, Cabrera hit his 20th homer, and second since the Phillies acquired him from the New York Mets on July 27, to give Philadelphia the lead for good.

Manny Machado had three hits, and Brian Dozier delivered a two-run double as Los Angeles earned a victory to salvage a game against visiting Houston in a weekend World Series rematch.

Walker Buehler (5-4) gave up two runs on four hits over 5 1/3 innings as the Dodgers won after scoring just one run and collecting seven hits combined in the first two games of the series.

George Springer led off the game for the Astros with a home run, his 19th long ball of the year. Springer left the game in the third inning with left thumb discomfort after he was thrown out while trying to steal second base.

Oakland completed a season-series sweep of Detroit, riding the 10-strikeout pitching of Trevor Cahill and a trio of home runs to a home victory.

After winning 1-0 and 2-1 to open the weekend series, the A’s completed a 7-0 run through the Tigers this season, allowing them to sweep consecutive opponents in the season series. Oakland capped a 7-0 sweep of the Blue Jays with three straight wins earlier in the week.

Before this week, the A’s had recorded just two season-series sweeps of seven or more games in franchise history.

Rookie Daniel Palka, who struck out in his first four at-bats, crushed a two-run, tiebreaking homer in the ninth inning, leading Chicago past Tampa Bay in St. Petersburg, Fla., to complete a three-game sweep.

Palka hit the first pitch he saw from reliever Diego Castillo (2-2), blasting a 96 mph pitch over the wall in center. The homer was preceded by Jose Abreu’s single.

Tampa Bay closed the score to 8-7 in the bottom of the ninth on an RBI double by Kevin Kiermaier. However, Hector Santiago (4-3) got Jesus Sucre to hit into a broken-bat, game-ending double play.

Jake Cave hit his first career grand slam, and Fernando Rodney picked up his 24th save as Minnesota held on for a victory and a three-game series sweep over Kansas City in Minneapolis.

Whit Merrifield homered and had four hits and Lucas Duda also homered for Kansas City. Alex Gordon and Alcides Escobar each had two hits for the Royals, who dropped their fourth straight game.

Evan Longoria had three hits, including a tiebreaking homer in the eighth inning, and drove in two runs as San Francisco beat Arizona in Phoenix.

Longoria had an RBI single in the third inning and doubled and scored in the sixth while extending his hitting streak to eight games. The third baseman went 7-for-18 as the Giants split the four-game series. Longoria is hitting .357 since returning from the disabled list July 26 after missing 34 games with a broken hand.

Steven Souza Jr. homered for the Diamondbacks, who fell back into a tie with the Dodgers atop the NL West.

The Nationals, who had been struggling before last week, took three of four in the series. Washington has won five of its past six games.

Roark (6-12) gave up seven hits and no walks while striking out two to win for the third straight time. The right-hander has allowed just two runs in 22 innings in that span, which has come at the right time for the Washington rotation.

Nolan Arenado homered in the top of the 11th inning, and Colorado salvaged the finale of a three-game series by winning at Milwaukee. The result snapped the Rockies’ four-game losing streak.

Trevor Story also homered and drove in four runs, and Scott Oberg (7-0) pitched one inning for the win. Seunghwan Oh got his first save with Colorado and third of the season.

Travis Shaw and Mike Moustakas homered for the Brewers, who rallied to tie it in the ninth before falling.

Cory Spangenberg doubled home the tiebreaking run with two outs in the eighth inning, and Hunter Renfroe triggered a four-run ninth with a two-run homer as San Diego won at Chicago to gain a split of a four-game series.

Travis Jankowski drew a two-out walk from Cubs reliever Carl Edwards Jr. in the eighth and stole second ahead of Spangenberg’s double.

Jose Ramirez hit a three-run home run in the first inning, and Cody Allen protected a late lead by pitching out of a bases-loaded jam in the seventh, helping Cleveland hold off visiting Los Angeles.

Shohei Ohtani, the focal point of the Los Angeles offense while Mike Trout sits out with a wrist injury, capped a six-hit series with a single and a double for the Angels, who lost for the sixth time in their last seven games.

Allen also pitched a scoreless eighth, after which Brad Hand came on for his third save in seven games for Cleveland.

The Cardinals, who scored both runs in the fifth, took two of three in the series. Jack Flaherty (5-6) struck out seven in six scoreless innings, and Bud Norris pitched a perfect ninth for his 21st save.

Pittsburgh’s Adam Frazier was 2-for-4, including a homer in the seventh.

Nick Markakis capped a four-hit day by homering with one out in the 10th inning as Atlanta came back from an early three-run deficit to win at New York.

The Braves took three of four from the Mets, who have lost seven of nine.

Markakis’ one-out homer off Tyler Bashlor (0-1) landed well beyond the fence in right-center field. It was the 13th homer of the season for Markakis, who finished 4-for-5 to raise his average to .319.

Mark Trumbo hit two homers and drove in a season-high five runs as Baltimore won at Arlington, Texas, to salvage the finale of a four-game series.

Trumbo, who has 15 homers this season, went 3-for-4. It was his second multi-homer game of the season.

Baltimore’s Jonathan Villar finished 3-for-3 with a homer, a double and a single. He also drew a walk and stole a base.

Nelson Cruz hit a tiebreaking, two-run homer in the seventh inning and had four RBIs to lead Seattle past visiting Toronto.

Kyle Seager hit two solo home runs for the Mariners, who avoided being swept by Toronto in the four-game series and snapped a five-game losing streak that equaled their worst of the season.

Toronto’s Aledmys Diaz had three hits, including a home run. In the series, Diaz went 7-for-13 with three homers and five RBIs.