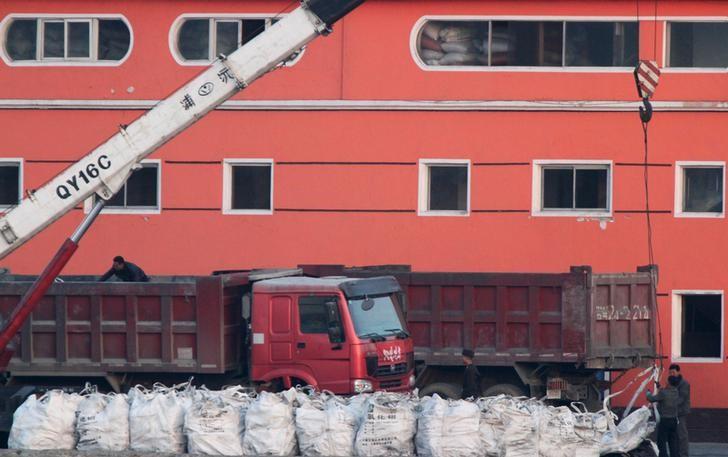 FILE PHOTO: Bags of alumina are seen on the bank of the Yalu River in Sinuiju, opposite the Chinese border city of Dandong, March 14, 2016. Picture taken from China’s side of the Yalu. REUTERS/Jacky Chen

The new cancellations – announced in recent days by the cities of Fengcheng, Fuxin, Gaizhou and Huludao – mean projects designed to produce over 18.5 million tonnes of the substance used to make aluminum metal will not go ahead as planned.

Chaoyang’s decision to walk away from a massive 10 million ton per year alumina plant last Wednesday after a public consultation over its environmental impact was followed by a flurry of announcements from the other cities.

First, Fengcheng said in a statement dated Aug. 3 that a 6 million ton per year alumina project it had agreed with Hangzhou Jinjiang Group had “stopped being implemented” in May for environmental reasons.

One day later, the Huludao government said it had noted netizens’ concerns over its own alumina refinery and decided to cancel it “in accordance with environmental-protection related rules,” while Fuxin said it was halting negotiations and cancelling its alumina project.

It was unclear what the planned capacities of those two projects were.

Then, on Aug. 5, Gaizhou said it had canceled a planned 2.5 million ton per year alumina project led by the Chongqing-based Bosai Group “in the wishes of the masses”.

While Liaoning was home to China’s first aluminum smelter in the 1930s, the province – along with neighboring Jilin and Heilongjiang – currently produces no alumina.

The growing backlash against the white powder, which is extracted from bauxite via the Bayer process, comes after it emerged both alumina and aluminum will be subject to 30 percent output cuts in 28 cities in northern China for a second year this coming winter, under draft anti-pollution measures released last week.

Bosai Group and Hangzhou Jinjiang did not immediately respond to requests for comment.