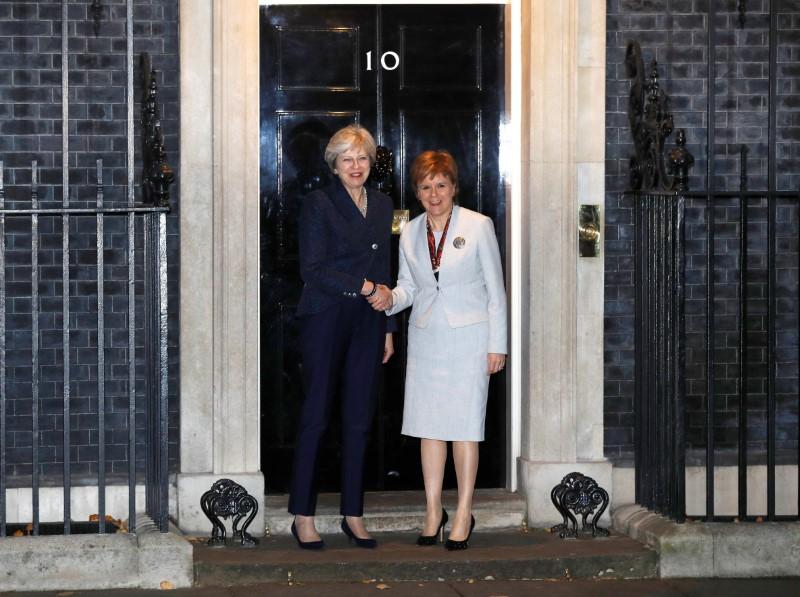 EDINBURGH (Reuters) – Scottish leader Nicola Sturgeon accused the British government of “talking-up” a no-deal Brexit, making it more likely the United Kingdom will just drop out of the European Union at great cost to the economy.

Sturgeon issued her comments ahead of a meeting with British Prime Minister Theresa May in Edinburgh.

A majority of Scots voted to stay in the European Union at a 2016 referendum where an overall majority in Britain voted to leave.

In June, Sturgeon’s Scottish National Party staged a walkout in Britain’s national parliament to protest at not being given more time for the its views to be heard before a key Brexit vote.

In a statement ahead of the meeting, Sturgeon said talk of a no-deal Brexit, where trade between Britain and the EU revert to World Trade Organisation rules because of a failure to reach agreement with Brussels before the March exit date, were “utterly unacceptable and deeply damaging.”

“(…) by talking up (a no-deal) as a negotiating tactic, there is a very real danger it becomes a reality,” she said.

May had to keep her promise to provide parliament with a detailed statement of what the future relationship with the EU would look like, Sturgeon said.

May’s visit to the Scottish capital is intended to mark 600 million pounds of investment by the British and Scottish governments in scientific research, aimed at boosting jobs and growth.

“As we leave the EU, the UK government is working in partnership with business, academia and the devolved administrations to create more good jobs and spread economic prosperity across the country,” May said ahead of the visit.