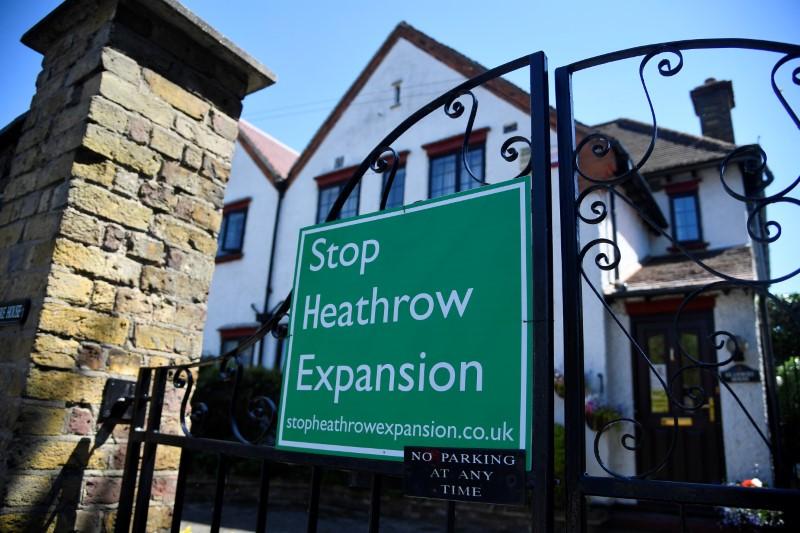 LONDON (Reuters) – A group of local authorities opposed to the expansion of Heathrow have formally started the process to try to launch a legal challenge to the government’s plan to build a new runway at Europe’s busiest airport.

FILE PHOTO: A poster against the expansion of Heathrow airport is seen in the village of Harmondsworth which is adjacent to the airport on the outskirts of London, Britain, June 25, 2018. REUTERS/Toby Melville

With Heathrow operating at full capacity, the government won a vote in June to proceed with a 14 billion pound ($18 billion) project to help develop new trade links and grow the economy, but the expansion faces opposition from local communities and environmentalists.

The local authorities of Hillingdon, Wandsworth, Richmond, Hammersmith and Fulham, and the Royal Borough of Windsor and Maidenhead, have joined forces with the Mayor of London and environment group Greenpeace to challenge the expansion.

Hillingdon said in a statement that lawyers for the group have submitted papers to the High Court to request a judicial review. A judge must now decide on whether there are grounds for allowing one.

Should a review go ahead, Heathrow Airport’s plan to start work in 2021 and have the new runway operating by 2026 could face delays.

Under a judicial review, the court cannot directly block the new runway from being built but a judge could strike out an offending part of the government’s plan or order the policy to be changed or reviewed.

In its submission, the opposition consortium argues that Transport Minister Chris Grayling “unlawfully designated the Airports National Policy Statement” under the Planning Act 2008 and cites the grounds of the legal challenge as being on air quality, inadequate environmental assessment, climate change, surface access, a breach of the habitats directive and a flawed consultation process.

The local authority challenge is not the only one faced by government’s expansion plan. Last week, another group, Heathrow Hub, also said it was seeking a judicial review.

Heathrow Hub is a group which believes the best way of adding capacity at Heathrow is to extend one of the existing runways instead of building a new one.

That idea was rejected by a government-appointed commission in 2015 in favor of building a new runway, but Heathrow Hub argues that elements of the decision-making process were flawed.