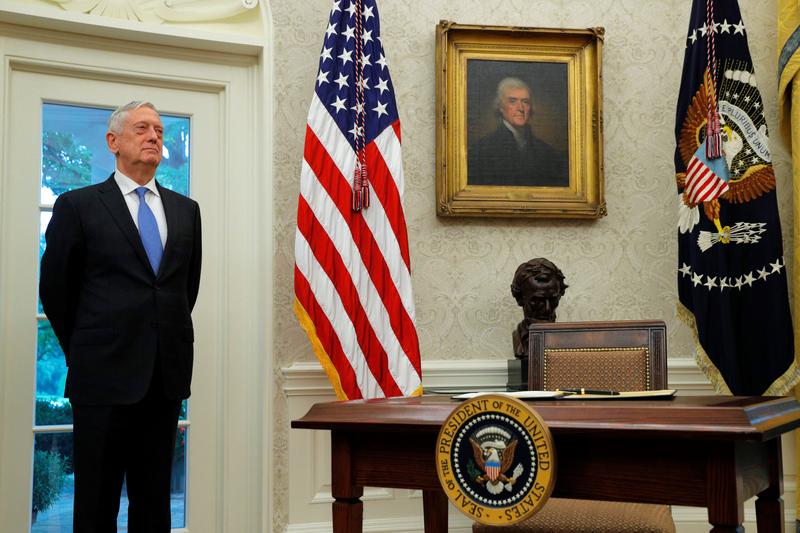 WASHINGTON (Reuters) – U.S. Defense Secretary Jim Mattis on Tuesday threw his support behind the idea of creating a space-focused military command but stopped short of promising the new “Space Force” branch of service that President Donald Trump has touted.

U.S. Secretary of Defense Jim Mattis attends the swearing in ceremony for new Secretary of Veterans Affairs Robert Wilkie in the Oval Office of the White House in Washington, U.S., July 30, 2018. REUTERS/Brian Snyder

Trump called for the creation of a sixth branch of the military, for space, a move critics said could harm the Air Force and which U.S. officials say would require an act of Congress.

The U.S. military, however, could create a unified combatant command for space, like one it created to focus on cyber warfare.

A Pentagon report to Congress expected in the coming days could examine the possibility of doing something similar with the U.S. military’s space capabilities, which include everything from satellites enabling the Global Positioning System (GPS) to sensors that help track missile launches.

Asked whether he supported establishing a new combatant command for space, Mattis responded: “Yes, absolutely.””We need to address space as a developing war-fighting domain and a combatant command is certainly one thing that we can establish,” he told reporters at the Pentagon, adding: “This is a process we’re in.”

Mattis once voiced opposition to creating a new branch of the U.S. military to focus on space-based military assets, saying in a 2017 letter to a lawmaker that would likely “present a narrower and even parochial approach to space operations.”

Mattis has since suggested he was not ruling out the idea and on Tuesday left the possibility open. Mattis said he was coordinating closely with Vice President Mike Pence and was in complete agreement with the White House.

Asked whether a new branch of the military would be created, Mattis responded: “I don’t have all the final answers yet. We’re still putting that together.”

The United States is a member of the 1967 Outer Space Treaty, which bars stationing weapons of mass destruction in space and only allows use of the moon and other celestial bodies for peaceful purposes.

The idea of a Space Force has been raised before, including in previous administrations, with proponents saying it would make the Pentagon’s efforts more focused and efficient.

It has also faced criticism from senior military officials. Air Force Chief of Staff General David Goldfein told a 2017 congressional hearing that creating a new space branch would “move us in the wrong direction.” The Air Force oversees most of the country’s space-related military activity.

Goldfein has since praised Trump’s focus on space.