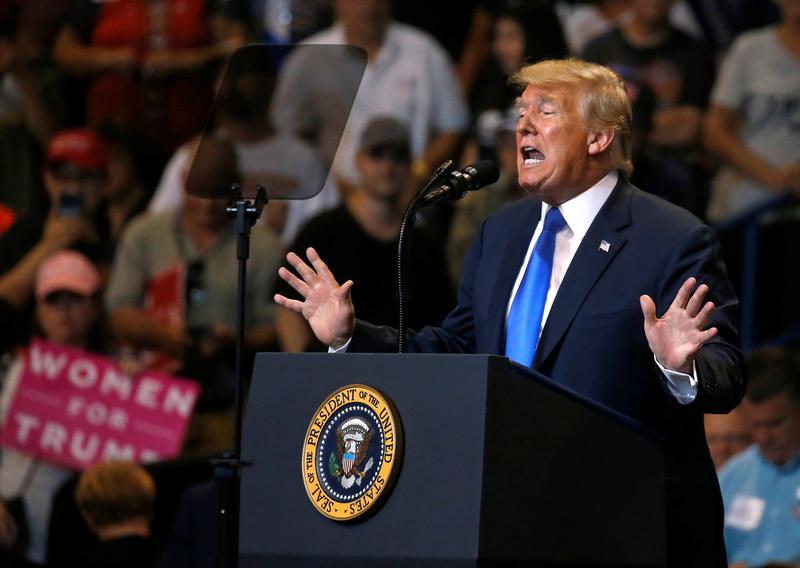 Officials from the California Department of Forestry and Fire Protection (CalFire) and the National Interagency Fire Center in Boise, Idaho, stressed that wild-land blazes are battled primarily by crews hacking away at dry brush with hand tools and bulldozers, not with water.

“Yes, we have plenty of water,” CalFire Chief Scott McLean said by telephone, adding that the two largest blazes in California this week – the Carr Fire and the Mendocino Complex Fire – were each ringed by at least three major reservoirs.

He said the tweets, after Trump on Sunday approved a federal disaster declaration requested by Governor Jerry Brown for the fires, sparked a barrage of media queries to CalFire.

On Sunday, Trump tweeted, “California wildfires are being magnified & made so much worse by the bad environmental laws which aren’t allowing massive amount of readily available water to be properly utilized. It is being diverted into the Pacific Ocean. Must also tree clear to stop fire spreading!”

Then on Monday he tweeted, “Governor Jerry Brown must allow the Free Flow of the vast amounts of water coming from the North and foolishly being diverted into the Pacific Ocean. Can be used for fires, farming and everything else. Think of California with plenty of Water – Nice! Fast Federal govt. approvals.”

The White House did not respond to requests to clarify Trump’s tweets.

Firefighters on a structure protection team watch a plume of smoke grow from the Ranch Fire (Mendocino Complex) in the hills north of Upper Lake, August 1, 2018. REUTERS/Fred Greaves

Neither McLean nor Jessica Gardetto, a spokeswoman for the Idaho-based fire agency, would address the tweets directly, but Gardetto said by telephone, “Most wildfire suppression efforts involve firefighters and boots on the ground.”

Water, used in protecting homes and other structures and for dumping on flames from airplane tankers and helicopters, is critical but secondary to the larger manual efforts of clearing unburned vegetation to remove it as potential fuel around a fire’s perimeter.

Peter Gleick, one of California’s leading experts on Western water resources as president of the Oakland-based Pacific Institute, said that Trump appeared to be seizing on the wildfires to side with farmers on a separate debate over how to allocate California’s finite water resources among farmers, cities, fish and wildlife.

“There’s nothing that California water policy has done that makes these fires worse or more difficult to fight,” Gleick said. Trump’s references to diverting water to the oceans was “completely backwards,” he said.

“The water that reaches the ocean is what’s left after we’ve diverted most of the water away for cities and farms, and what little is left is barely enough for California’s aquatic ecosystems and the fisheries,” he said.

The White House did not immediately respond when asked about Gleick’s comments.

Critics said his tweets ignored the greater wildfire frequency and severity experienced in California and other Western states from extreme drought and sustained periods of hot, dry weather, in keeping with the forecasts of climate scientists.

Fire officials have said that 95 percent of all wildfires are caused by humans, from camp fires left unattended to careless smoking, to sparks from vehicles and improperly maintained power lines.