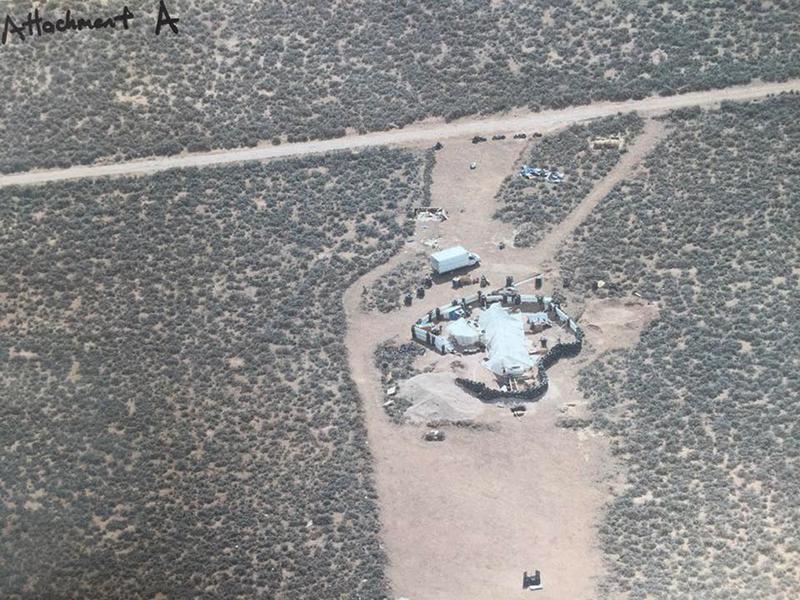 (Reuters) – Authorities in New Mexico have recovered the remains of a young boy inside the ramshackle compound where 11 other children were found alive but malnourished in a raid on the site last week, the Taos County sheriff said on Wednesday.

An aerial view of a compound in rural New Mexico where 11 children were taken into protective custody for their own health and safety after a raid by authorities, is shown in this photo near Amalia, New Mexico, U.S., provided August 6, 2018. Taos County Sheriff’s Office/Handout via REUTERS

Positive identification by autopsy has yet to be made, but the remains were believed to be those of a 3-year-old boy whose disappearance from his home near Atlanta, Georgia, eventually led to Friday’s search of the property, Sheriff Jerry Hogrefe told a news conference.

The compound, surrounded by tires and a trench, is located on the outskirts of the rural community of Amalia, New Mexico, near the Colorado state line, about 50 miles (80 km) north of Taos.

Hogrefe said the site had been under surveillance by the Federal Bureau of Investigation for some time as part of its search for the missing boy. The sheriff said he obtained a warrant to search the site after investigators in Georgia received an anonymous tip saying that children inside were “starving.”

The 11 surviving youngsters found there, described by Hogrefe as looking like “Third World country refugees,” were taken into protective custody by state child welfare authorities.

The missing boy’s father, suspected of abducting his son, and a second man accused of harboring him as a fugitive, were arrested at the compound the day of the raid, and three women presumed to be the mothers of the 11 children also were detained during the sweep.

The remains of a young boy were found on a return visit to the site on Sunday, on what would have been the missing child’s fourth birthday, Hogrefe said.

Each of the five adults has since been charged with 11 counts of felony child abuse, according to the local prosecutor, Donald Gallegos. He said all five were due to make their first court appearance on Thursday.

The boy’s father, who the sheriff said was heavily armed when taken into custody, was identified as Siraj Wahhaj, 39. According to CNN, Wahhaj is himself the son of a prominent Muslim cleric of the same name in New York.

The second man has been alternatively identified by the sheriff as Lucas Morten and Lucan Morton.

The sheriff declined to answer questions about what was going on at the compound, but he said a shooting range had been built at the property.

Albuquerque television station KOAT-TV, an ABC affiliate, said the missing boy, named Abdul, was first reported missing by his mother in December after the father left with the child on a supposed trip to a park.

Officials in Clayton County, Georgia, said the boy and his father were last seen in Alabama, on Dec. 13, when they were involved in a traffic accident while traveling with five other children and two adults, KOAT-TV reported. The group told an Alabama officer, according to the report, they were headed to New Mexico on a camping trip and were later picked up in a truck registered to Morton.

The boy was reported by his mother to suffer from multiple health issues, including seizures and a brain disorder that prevented him from walking and required regular medication, according to KOAT.

In an arrest warrant from Georgia the mother alleged that the father had wanted to perform an exorcism on the boy, but Hogrefe said investigators had no evidence this had occurred.

The FBI referred queries from Reuters about the case to the Taos County sheriff.

Reporting and writing by Steve Gorman in Los Angeles; Additional reporting by Keith Coffman in Denver; Editing by Simon Cameron-Moore