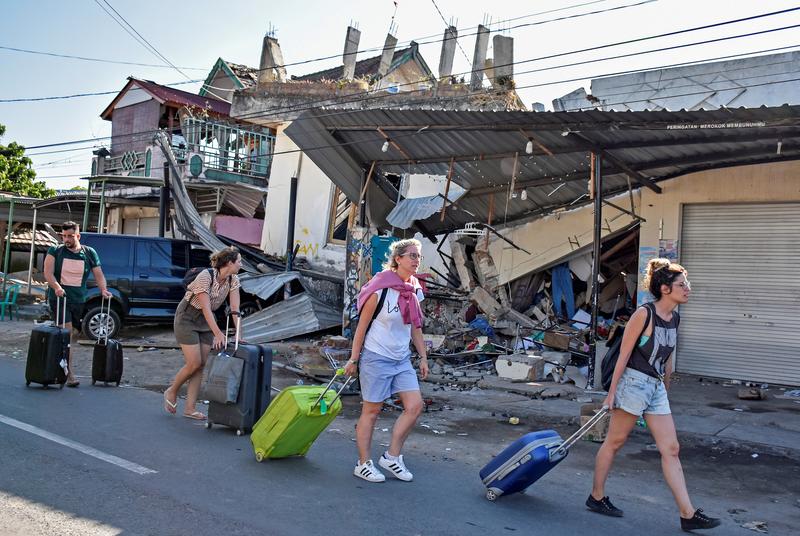 Any hotels still open are refusing guests out of safety concerns, while nearby restaurants and dive shops lie vacant in what is usually one of their busiest months of the year, reeling from the devastation of tourism caused by the quake.

“It went from high season just a few days ago to absolutely nothing now,” lamented Howard Singleton, who owns a beachside restaurant in the west coast town of Senggigi, ravished by striking sunset views of a volcano on neighboring Bali.

Authorities are still tallying up earthquake losses, but the value of assets destroyed and other damage could easily top 1 trillion rupiah ($69 million), said Sutopo Purwo Nugroho, the spokesman of the National Disaster Mitigation Agency.

Foreign and domestic tourists fled after Sunday’s earthquake of magnitude 6.9 destroyed homes and displaced tens of thousands of people, adding to the havoc from an earlier quake on July 29, although of smaller magnitude, at 6.4.

“We’ve had light earthquakes in the past, but never anything like this,” said Marcel De Rijk, owner of Lombok boutique hotel chain Puri Mas Resort, whose beachside hotel and villas will stay closed until September for repairs.

“We’ve lost a lot of bookings and future guests are in wait-and-see mode,” he added. “I don’t think people will choose Lombok anymore this summer.”

“I imagine things will be pretty desperate and I don’t expect things to improve before next year,” said Singleton.

Both experts and tourist businesses say Lombok will recover, but the next few months will be tough.

FILE PHOTO – A foreign tourists stands near damaged buldings as he tries to flag down a car following a strong earthquake in Pemenang, North Lombok, Indonesia August 6, 2018 in this photo taken by Antara Foto. Antara Foto/Ahmad Subaidi/ via REUTERS/File Photo

“But the short-term impacts are heartbreaking for local communities. Tourism dollars will go a long way in helping the communities rebuild.”

The quake could not have come at a worse time for President Joko Widodo, who declared last month that Southeast Asia’s largest economy “needs dollars now” and launched a tourism drive to narrow its current account gap and shore up its currency.

The rupiah has lost about six percent against the U.S. dollar since the start of 2018, with investors fleeing emerging markets as U.S. interest rates rise and global trade tension rises.

Widodo had ordered ministers in July to find ways to build up a tourism sector that is mostly underdeveloped, despite the country’s pristine beaches and scenic landscapes.

Tourism directly contributed less than 2 percent to Indonesia’s economy in 2017, far below Thailand and the Philippines, the World Travel and Tourism Council says.

Lombok is one of 10 new destinations, dubbed “the new Balis”, that Indonesia is developing to help attain Widodo’s ambitious target of boosting tourism revenues to 8 percent of GDP and attracting 20 million foreign tourists a year.

The disaster may be a jolt to those ambitions, but officials say they are not worried.

Any impact on tourism from the earthquakes will be temporary and will not derail plans for October’s IMF-World Bank annual meetings in Bali, Luhut Pandjaitan, the coordinating minister for maritime affairs, told domestic media.

De Rijk pointed to the return of tourists after the 2002 nightclub bombings of Bali in which 202 people died.

“History shows that even after the worst scenarios … tourists will always come back. Lombok is such a beautiful place,” he said.