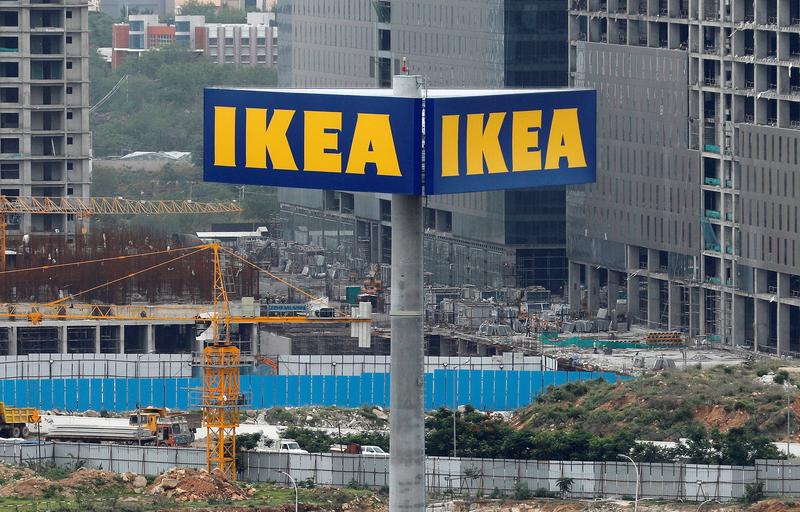 HYDERABAD (Reuters) – IKEA is looking to keep prices even lower in India than it typically does elsewhere when it opens its first store in the country on Thursday, overcoming high taxes on imported goods as it woos cost-conscious shoppers unaccustomed to DIY furniture.

The logo of IKEA is seen outside its under construction store in Hyderabad, India, July 18, 2018. REUTERS/Danish Siddiqui

Over a decade since floating the idea of Indian expansion, the Swedish retailer will finally mark its entry with a 400,000 square foot (37,160 square meter) store in the southern city of Hyderabad, where it will sell 1,000 items including cutlery and stuffed toys for less than 200 rupees ($2.91).

IKEA is pushing into Asia and South America as growth slows in Europe and other traditional markets. It is betting on India with its growing middle class, but mindful of the relatively high pricing that hit sales when entering China and Australia.

The firm previously said raising the proportion of locally sourced materials would help it overcome import duties which would otherwise make it challenging to keep prices low.

Regulation dictates IKEA must source at least 30 percent of materials locally within five years of starting operation. It already sources about a fifth of its global supplies from India.

Group Chief Executive Jesper Brodin, at a news conference on Wednesday, said India will become one of IKEA’s biggest sourcing markets in the future. At present, its top suppliers are China, Poland and Italy.

Brodin also said he wants IKEA to be more affordable and accessible in India.

IKEA’s newly launched India website showed popular products at lower prices than in the United States, for instance. The white variation of its best-selling Billy bookcase is cheaper by a fifth and the dark-grey Ektorp sofa is priced 30 percent lower.

FILE PHOTO: The logo of IKEA is seen above a store in Voesendorf, Austria, April 24, 2017. REUTERS/Heinz-Peter Bader/File Photo

“It would be interesting to see how IKEA does justice to its vision of ‘furniture for all’,” she said.

IKEA will not only have to win over tastes in India, but also change a culture. Driving to a shop for do-it-yourself (DIY) interior goods is a novel concept in India, where made-to-order furniture is delivered to the customer fully assembled.

IKEA has therefore taken the unusual step of setting up a 150-member in-house task force to help with assembly. Overall, the Hyderabad store will directly employ 950 people and another 1,500 indirectly for various services, it said on Wednesday.

The firm plans to open more than 25 stores across India by 2025, with the possibility of some being smaller inner-city stores to complement larger suburban locations. It has begun building a store in Mumbai, which it expects to open next summer.

So far, IKEA said on Wednesday it has spent half the 105 billion rupees ($1.53 billion) earmarked for India investment, and plans to spend 10 billion rupees setting up each store.

IKEA’s competition in India includes startups Pepperfry and UrbanLadder, which offer free delivery and furniture assembled on site at no extra cost. The overall market, however, is dominated by miscellaneous vendors selling ready-made or made-to-order furniture.

“Even though winning customers in the highly fragmented, untapped and unorganized Indian market will not be easy for the Swedish home furniture giant, it will surely accelerate a shift to organized space (market),” market researcher GlobalData said in a note.