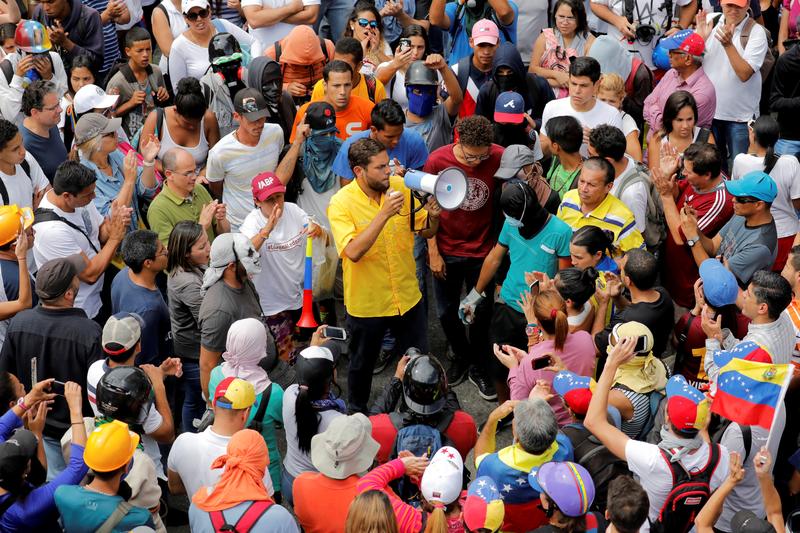 CARACAS (Reuters) – Venezuela’s Constituent Assembly was expected on Wednesday to scrap immunity for some opposition lawmakers it says were involved in an attempt to assassinate President Nicolas Maduro with exploding drones at a rally over the weekend.

Juan Requesens, a 29-year old lawmaker and former student leader, was detained on Tuesday night in apparent connection with the drone incident.

Leftist Maduro had said that Requesens, who he described as “one of the craziest ones, a psychopath,” had been implicated in the launch of two DJI M600 drones laden with C4 explosives over an outdoor rally attended by Maduro on Saturday.

Maduro was unharmed in the drone incident. Explosives aboard the drones detonated, injuring seven military officers and sending soldiers scurrying for cover during the televised broadcast.

The powerful president of the Constituent Assembly, Diosdado Cabello, said that the pro-government body would on Wednesday discuss lifting immunity for lawmakers involved in the “failed magnicide attempt.”

Government foes said Maduro was using the incident to spook rivals and cement his power in the oil-rich nation suffering from food shortages, salary-destroying hyperinflation and frequent power cuts.

“If you thought you were going to intimidate us, scare us, make us run, you were wrong. You will not silence us, Maduro, even if you jail all of us,” lawmaker Alfonso Marquina said in a press conference on Wednesday.

Requesens’ detention further swells the ranks of opposition activists forced into exile, arrested, or barred from politics during Maduro’s crackdown on dissent.

“Many of our brothers are outside the country, many are underground because they were killed – because you killed them, Nicolas!” Requesens had told the opposition-led congress on Tuesday before his evening arrest.

“Today I can speak to you here, but I do not know about tomorrow,” added Requesens, who was often on the forefront of massive anti-Maduro street protests in 2014 and 2017.

Requesens’ father said the family had no information about his whereabouts, although they suspected he was locked up at the overcrowded Caracas headquarters of intelligence agency Sebin.

Maduro says that he is the victim of a right-wing plot led by the Colombian government and U.S. residents to overthrow him. He said the drone suspects prepared at training camp across the porous border in Colombia and that 11 hit men had been offered $50 million to assassinate him. He did not provide evidence.

On Wednesday chief prosecutor Tarek Saab said there were 19 people linked to the attack, with six of them behind bars.