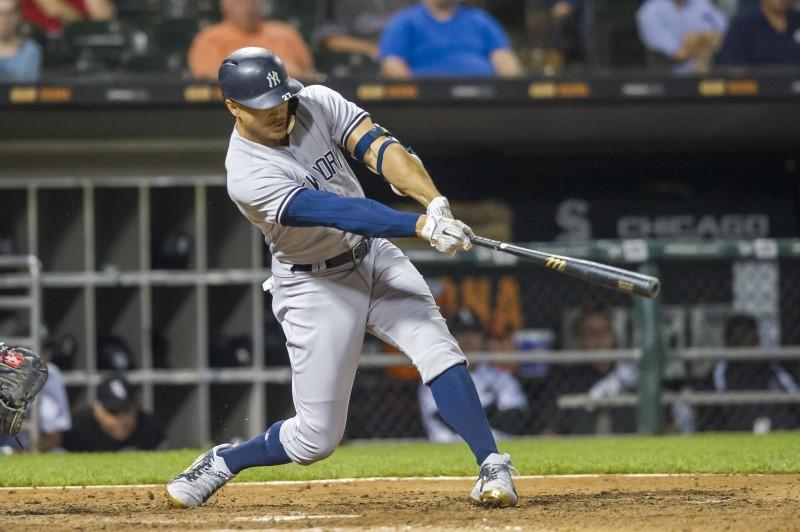 Giancarlo Stanton hit his first grand slam in over four years, Luis Severino settled down after a shaky start to become the first 15-game winner in the American League, and the New York Yankees beat the host Chicago White Sox 7-3 Wednesday night to finish a three-game sweep.

Stanton gave the Yankees a 6-2 lead when he hooked a full-count fastball by Lucas Giolito (7-9) just inside the foul pole and into the right field seats with one out in the second inning. It was his sixth career grand slam and first since a walk-off grand slam against Seattle’s Yoervis Medina on April 18, 2014.

Winless in his previous four starts since July 7 at Toronto, Severino (15-5) allowed two of his three runs in the first inning and seven hits in seven innings. The right-hander struck out eight without a walk.

Jose Abreu, who drove in all three Chicago runs Tuesday, had an RBI double, but the White Sox were swept at home by the Yankees for the first time since May 2002.

Rafael Devers hit a two-run homer in his return from the disabled list, Xander Bogaerts had three RBIs, and Brian Johnson pitched seven innings as Boston won at Toronto.

Johnson (3-3) allowed five runs, six hits and two walks while striking out six in winning his second straight start. Boston has won the first two games of the three-game series, six in a row overall and 10 of its last 11.

Francisco Lindor hit a three-run, walk-off home run with two outs in the bottom of the ninth to give Cleveland the victory over visiting Minnesota.

Lindor lined the first pitch from reliever Trevor Hildenberger (2-3) down the right field line for his 29th homer of the season, driving in Jason Kipnis and Brandon Guyer, who had both singled earlier in the inning.

Cody Allen (4-4) picked up the win after giving up a game-tying home run to Miguel Sano in the ninth, his third blown save in 24 chances.

The Brewers tied a franchise record with home runs by five different players in a game. Orlando Arcia connected in the fifth inning, and Christian Yelich went deep in the sixth.

Fillmyer allowed three hits while helping the Royals halt a six-game slide. He struck out three and walked two in a solid 98-pitch effort.

David Peralta continued his torrid streak with four hits, including a two-run triple, and Patrick Corbin threw 7 1/3 scoreless innings as Arizona bested visiting Philadelphia in the rubber match of a three-game series.

Peralta had 10 hits in the three games against the Phillies, tying a franchise record set by Luis Gonzalez against Montreal in 1999. Corbin (9-4) gave up four hits and faced only two batters over the minimum, benefiting from two double plays.

Cesar Hernandez had two of the Phillies’ four hits, and Roman Quinn was the only runner to get as far as second base when he doubled as a pinch hitter in the sixth inning.

All of that power gave starter Mike Foltynewicz (9-7) more than enough offense. The right-hander allowed three runs (one earned) on six hits and fanned seven in 5 2/3 innings while walking two.

With the win combined with Arizona’s victory over Philadelphia, the Braves climbed to within a half-game of the first-place Phillies in the National League East.

Mike Zunino hit two solo homers for the Mariners, who are 10-19 since having an eight-game winning streak snapped July 4.

Jaime Barria and three relievers combined on a five-hit shutout in Los Angeles’ win over Detroit that completed a three-game sweep in Anaheim, Calif.

Barria (7-7) struck out five, walked one and gave up five hits in 5 2/3 innings. Taylor Cole, Hansel Robles and Noe Ramirez combined to hold the Tigers hitless over the final 3 1/3 innings to finish it off.

The Angels had 10 hits without center fielder Mike Trout, who missed his seventh consecutive game because of a right wrist contusion. The Angels have an off day Thursday, and Trout is expected back in the lineup on Friday against Oakland.

Colin Moran and Corey Dickerson had two hits each, and Chris Archer (4-5) got his first win since being acquired by Pittsburgh at the July 31 trade deadline.

Colorado’s German Marquez (9-9) turned in a perfect fourth inning when he struck out the side on nine pitches. The feat, referred to as an immaculate inning, was the second one in Rockies history and the first time it happened at Coors Field. Colorado reliever Rex Brothers accomplished it at San Francisco on June 14, 2014.

Carpenter leads the National League with 31 homers, and he has reached base in 27 consecutive games, the longest active streak in the majors. He also leads the majors with 21 road homers.

Since the All-Star break, Carpenter has 12 homers. The rest of the Cardinals have just 11.

Trey Mancini hit a go-ahead, two-run double to left field in the ninth inning as Baltimore blew a late lead but came back to trim Tampa Bay in St. Petersburg, Fla.

With the Rays on top 4-3, the Orioles’ Mark Trumbo, who homered earlier in the game, opened the top of the ninth with a single against Sergio Romo (2-3). Danny Valencia also singled, sending pinch runner Jace Peterson to third. Joey Rickard pinch-ran for Valencia and stole second. Both runs scored on Mancini’s double.

Orioles right-hander Mychal Givens survived the bottom of the ninth to record his third save. The Rays’ Mallex Smith reached on a two-out error, stole second and went to third when catcher Caleb Joseph’s throw went into center field for Baltimore’s fifth error of the game. The game ended when Matt Duffy hit a hard line drive to second.

The win was the first for deGrom since June 18. He went 0-5 with a 2.47 ERA in between victories, a span in which the Mets scored just eight runs while deGrom was on the mound.

Marcus Semien beat third baseman Manny Machado’s throw to the plate on Khris Davis’ ground ball with one out in the eighth inning, breaking a tie and helping Oakland edge visiting Los Angeles.

Blake Treinen worked around a one-out walk in the ninth for his 29th save, snapping the Dodgers’ two-game winning streak.