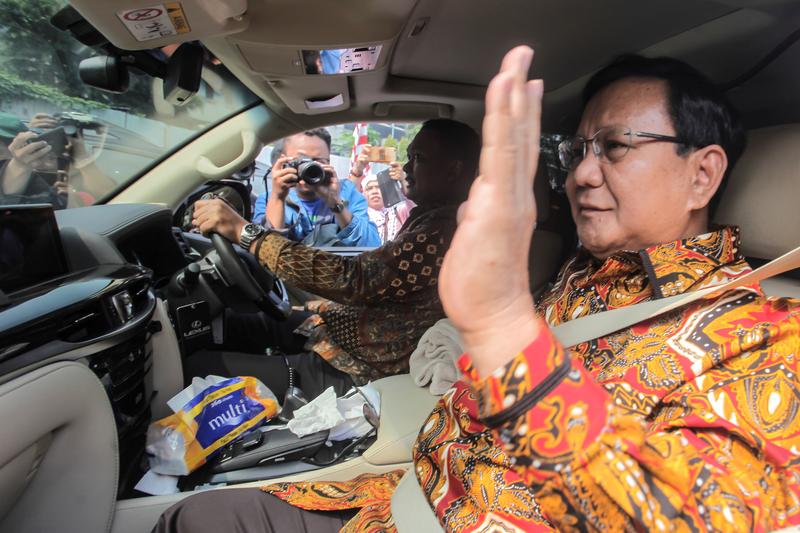 JAKARTA (Reuters) – A political coalition formed to challenge Indonesian President Joko Widodo in next year’s elections is under strain after a senior official from one party described Widodo’s likely opponent, Prabowo Subianto, as a “cardboard general” and a “chicken”.

Gerindra Party leader Prabowo Subianto waves to reporters as he arrives for a meeting with former Indonesian President Susilo Bambang Yudhoyono at the Yudhoyono’s residence in Jakarta, Indonesia August 9, 2018 in this photo taken by Antara Foto. Antara Foto/Muhammad Adimaja/via REUTERS

The stream of derogatory comments from the deputy secretary general of the Democrat Party, Andi Arief, posted on social media on Wednesday night, came in response to speculation that Prabowo would select Jakarta deputy governor Sandiaga Uno as his running mate and jettison the Democrat’s Agus Yudhoyono.

Agus Yudhyono, a 39-year-old retired soldier, is the former president’s son and expected to be the vice presidential candidate after the deal.

“I have had doubts for a long time whether (Prabowo’s) voice matches his mentality. He is not a strong leader, he is a chicken,” Arief tweeted, following up in a later missive with the epithet “cardboard general”.

Indonesia, the world’s third largest democracy and biggest Muslim majority country, goes to the polls in April. Candidates for president and vice president have until Friday to nominate.

Widodo is a popular moderate who has had mixed success with his reform agenda. He has yet to announce his running mate.

Prabowo, a former general, is a nationalist with strong links to Islamists who frequently rails against foreigners.

Prabowo went to the elder Yudhoyono’s home on Thursday. Leaving the meeting, Prabowo declined to discuss what was discussed.

Asked when he would declare his candidacy and whether Uno would be his running mate, he said: “The process is ongoing. Relax.”

Gerindra’s secretary general, Ahmad Muzani, who accompanied Prabowo when meeting Yudhoyono, said the atmosphere during the meeting was friendly, although they did not come to a decision on who gets to be the vice presidential candidate.

Uno did not respond messages and calls from Reuters but local media quoted him saying on Thursday that he had not resigned as Jakarta deputy governor.

“I’m still on duty,” he said, according to local news portal detik.com. “No resignation letter has been drafted.”

Uno, a wealthy private equity tycoon, is a member of Gerindra and reportedly met Prabowo at his home on Wednesday.

He played a pivotal role plotting the campaign to oust Widodo ally and then incumbent governor Basuki Tjahaja Purnama, who was accused of insulting the Koran and was later jailed for two years.

After the victory, Uno said it was regrettable race and religion had dominated the campaign.