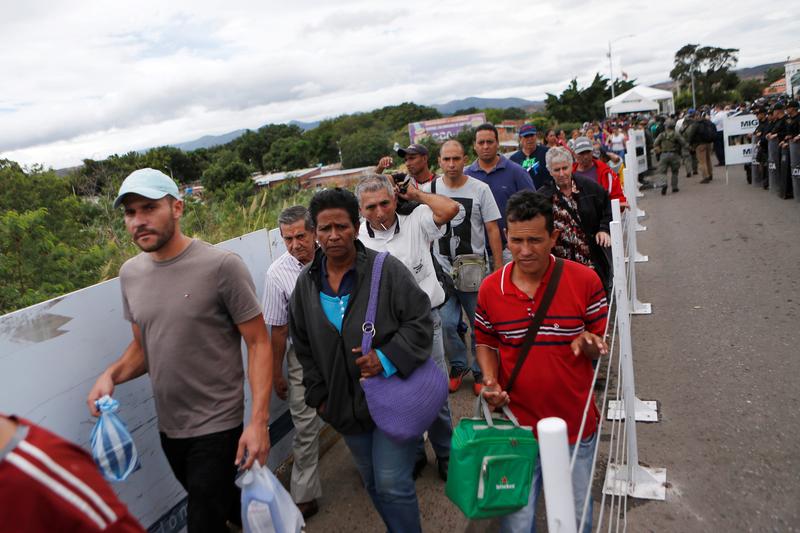 CUCUTA, Colombia (Reuters) – The United States will give Colombia $9 million to help provide for hundreds of thousands of refugees from Venezuela fleeing a severe economic and political crisis over the past 18 months, U.S. ambassador to the United Nations Nikki Haley said on Wednesday.

People queue to try to cross into Colombia from Venezuela via the Simon Bolivar international bridge in Cucuta, Colombia August 8, 2018. REUTERS/Luisa Gonzalez

“We really have to question how long can this be sustainable,” said Haley, who was in Colombia for Tuesday’s inauguration of Colombian President Ivan Duque.

Speaking in northern Cucuta, which borders Venezuela, Haley said the funds would go toward water sanitation, health needs, sterilization and medicines and “things like that to really help the Venezuelan people.”

Most migrants cross into Colombia with only the possessions they can carry. Many are underfed and in need of medical care.

“At some point Maduro is gonna have to be dealt with,” Haley said, referring to Venezuelan President Nicolas Maduro.

Venezuela’s Information Ministry did not immediately respond to a request for comment.

Haley has long been critical of Venezuela at the United Nations, requesting a closed door Security Council meeting in May last year and then holding an informal public council meeting in November, which was boycotted by Russia, China, Egypt and Bolivia.

Any U.S. push for U.N. Security Council action against Venezuela would likely be blocked by Russia and China.

U.S. President Donald Trump has imposed economic sanctions on Maduro and members of his cabinet after accusing them of undermining democracy and violating human rights.

“This is a crisis where the region has not been as loud and active as we would like to see,” Haley said. “The world in general needs to realize that we have a dictator in Venezuela that is doing everything to protect himself and sacrificing all of the Venezuelan people to do it.”

During a visit to a soup kitchen for migrants, Haley spoke with Gabriela Gil, 25, who fled to Colombia from Venezuela with her husband and baby.

“We came with nothing,” Gil said. “We’re happy she’s here to see what it’s like for us.”

In one of his final acts in office, former Colombian President Juan Manuel Santos last week gave more than 400,000 Venezuelans permission to stay in the country for up to two years. The migrants will have access to certain social services like public healthcare.

Colombia, whose relations with Maduro are often frigid, has accepted the bulk of migrants from Venezuela, and 200,000 Colombians who had been living in Venezuela have returned home, according to Colombian figures.

Maduro this weekend accused Santos of orchestrating a failed assassination attempt against him using drones. Santos dismissed the accusation, saying he was occupied with something more important – the baptism of his granddaughter Celeste.