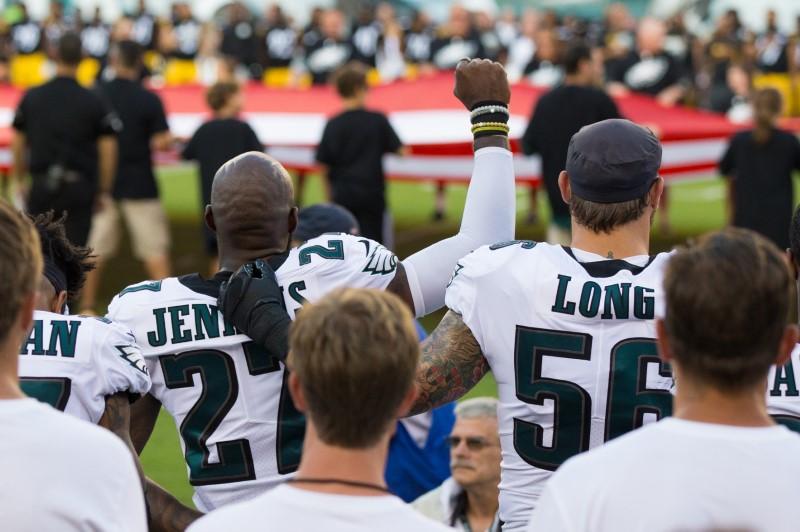 On the first full night of the NFL preseason, two Philadelphia Eagles players raised their fists Thursday during the playing of the national anthem.

Safety Malcolm Jenkins, a longtime advocate on social issues, and defensive back De’Vante Bausby both held up their fists while standing on the sideline with their teammates before the game against the visiting Pittsburgh Steelers. Defensive end Chris Long put his arm on Jenkins’ back, a sign of solidarity he began last season.

After a 2017 season in which the NFL struggled with the split national reaction to players using the anthem as a time for social statements, with President Donald Trump weighing in heavily on the topic, the league instituted a new policy banning on-field anthem protests.

However, the NFL put the new rule on hold when it began engaging the NFL Players Association in talks over how to best convey social-justice messages. The discussions have yet to produce a unified solution.

Jenkins tweeted Thursday afternoon, “Before we enjoy this game lets take some time to ponder that more than 60% of the prison population are people of color. The NFL is made up of 70% African Americans. What you witness on the field does not represent the reality of everyday America. We are the anomalies…”

Previously, Jenkins had called Jerry Jones a “bully” after the Dallas Cowboys owner announced that all players on his team would be required to stand for the anthem.

“There’s always this kind of, speaking out of both ends from the league, (like) we support our players but then you put in a policy to take away their voices,” Jenkins said last month. “Hopefully you’ll have the majority of owners speak out on whatever side of this that they actually stand.

“When you have owners like Jerry Jones who speak so strongly and who has drawn his line in the sand and has been very vocal about it, and you’ve had other owners be very quiet, Jerry Jones is now the voice of NFL ownership. So unless you have some other owners come out with some definitive statements and support, they’re going to allow Jerry Jones to push the narrative of not only NFL owners but the NFL as a whole.”