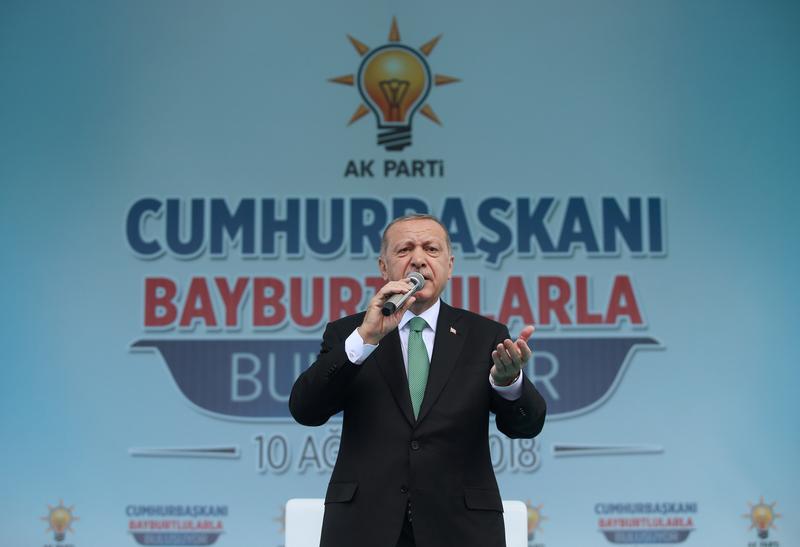 ISTANBUL/ANKARA (Reuters) – President Tayyip Erdogan told Turks on Friday to exchange their gold and dollars into lira, with the country’s currency in free fall after President Donald Trump turned the screws on Ankara by doubling tariffs on metals imports.

The lira TRYTOM=D3 has long been falling on worries about Erdogan’s influence over monetary policy and worsening relations with the United States. That turned into a rout on Friday, with the lira diving more than 18 percent at one point, the biggest one-day drop since Turkey’s 2001 financial crisis.

It has also lost more than 40 percent this year, hitting a new record low after Trump took steps to punish Turkey in a wide-ranging dispute.

Trump said he had authorised higher tariffs on imports from Turkey, imposing duties of 20 percent on aluminium and 50 percent on steel. The lira, he noted on Twitter, “slides rapidly downward against our very strong Dollar!”

“Our relations with Turkey are not good at this time!” he said in an early morning post.

Those duties are double the level that Trump imposed in March on steel and aluminium imports from a range of countries. The White house said he had authorised the move under Section 232 of U.S. trade law, which allows for tariffs on national security grounds.

While Turkey and the United States are at odds over a host of issues, the most pressing disagreement has been over the detention of U.S. citizens in Turkey, notably Christian pastor Andrew Brunson who is on trial on terrorism charges. A delegation of Turkish officials held talks with counterparts in Washington this week but there was no breakthrough.

Waves from the crisis spread abroad, with investors selling off shares in European banks which have large exposure to the Turkish economy.

The lira sell-off has deepened concern particularly about whether over-indebted companies will be able to pay back loans taken out in euros and dollars after years of overseas borrowing to fund a construction boom under Erdogan.

Erdogan’s characteristic defiance in the face of the crisis has further unnerved investors. The president, who says a shadowy “interest rate lobby” and Western credit ratings agencies are attempting to bring down Turkey’s economy, appealed to Turks’ patriotism.

“If there is anyone who has dollars or gold under their pillows, they should go exchange it for liras at our banks. This is a national, domestic battle,” he told a crowd in the northeastern city of Bayburt. “This will be my people’s response to those who have waged an economic war against us.”

Erdogan, elected in June to a new executive presidency, enjoys the support of many Turks even though food, rent and fuel prices have all surged. “This crisis is created by America,” said Serap, a 23-year-old clerk at a clothes store in central Istanbul.

However, the Istanbul Chamber of Industry expressed its concern about the lira while some economists were less impressed by the government’s handling of the crisis.

“The basic reason the exchange rate has gone off the rails is that confidence in the management of the economy has disappeared both domestically and abroad,” said Seyfettin Gursel, a professor at Turkey’s Bahcesehir University.

“Confidence needs to be regained. It is obvious how it will be done: since the final decision-maker of all policies in the new regime is the president, the responsibility of regaining confidence is on his shoulders.”

Meanwhile the cost of insuring exposure to Turkey’s sovereign debt through five year credit defaults swaps TRGV5YUSAC=MG has spiralled to the highest level since March 2009, topping levels seen for serial defaulter Greece GRGV5YUSAC=MG, which has three bailouts in the last decade.

Presenting the government’s new economic model, he said the next steps of rebalancing would entail lowering the current account deficit and improving trust.

This did nothing to revive the currency. “The tweet is mightier than the Turkish sword,” Cristian Maggio, head of emerging markets strategy at TD Securities, said in a note to clients. “Albayrak’s plan was uninspiring at best.”

Erdogan, a self-described “enemy of interest rates”, wants cheap credit from banks to fuel growth, but investors fear the economy is overheating and could be set for a hard landing. His comments on interest rates — and his recent appointment of his son-in-law as finance minister — have heightened perceptions that the central bank is not independent.

The central bank raised interest rates to support the lira in an emergency move in May, but it did not tighten at its last meeting.