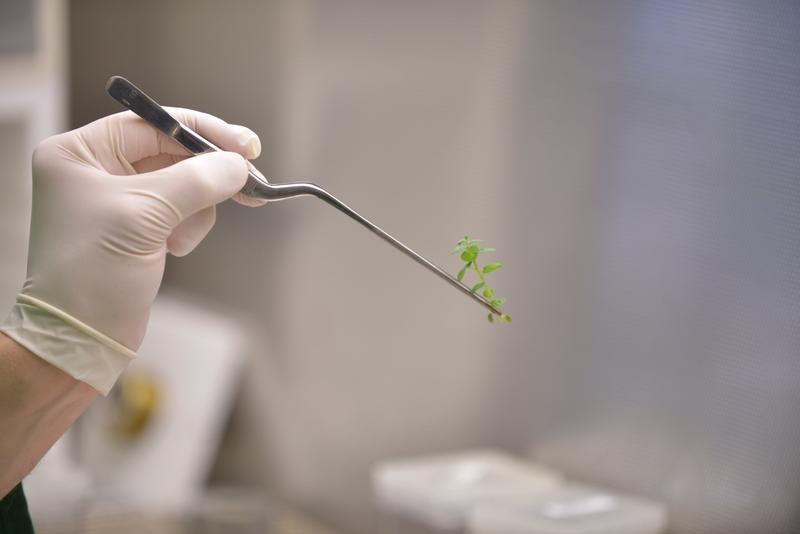 (Reuters) – In a suburban Minneapolis laboratory, a tiny company that has never turned a profit is poised to beat the world’s biggest agriculture firms to market with the next potential breakthrough in genetic engineering – a crop with “edited” DNA.

Calyxt Inc, an eight-year-old firm co-founded by a genetics professor, altered the genes of a soybean plant to produce healthier oil using the cutting-edge editing technique rather than conventional genetic modification.

Seventy-eight farmers planted those soybeans this spring across 17,000 acres in South Dakota and Minnesota, a crop expected to be the first gene-edited crop to sell commercially, beating out Fortune 500 companies.

Seed development giants such as Monsanto, Syngenta AG and DowDuPont Inc have dominated genetically modified crop technology that emerged in the 1990s. But they face a wider field of competition from start-ups and other smaller competitors because gene-edited crops have drastically lower development costs and the U.S. Department of Agriculture (USDA) has decided not to regulate them.

Relatively unknown firms including Calyxt, Cibus, and Benson Hill Biosystems are already advancing their own gene-edited projects in a race against Big Ag for dominance of the potentially transformational technology.

“It’s a very exciting time for such a young company,” said Calyxt CEO Federico Tripodi, who oversees 45 people. “The fact a company so small and nimble can accomplish those things has picked up interest in the industry.”

Gene-editing technology involves targeting specific genes in a single organism and disrupting those linked to undesirable characteristics or altering them to make a positive change. Traditional genetic modification, by contrast, involves transferring a gene from one kind of organism to another, a process that still does not have full consumer acceptance.

The USDA has fielded 23 inquiries about whether gene-edited crops need regulation and decided that none meet its criteria for oversight. That saves their developers years of time and untold amounts of money compared to traditional genetically modified crops. Of those 23 organisms, just three were being developed by major agriculture firms.

The newly competitive landscape could foster more partnerships and licensing deals between big and small firms, along with universities or other public research institutions, said Monsanto spokeswoman Camille Lynne Scott. Monsanto – which was recently acquired by Bayer AG – invested $100 million in startup Pairwise Plants this year to accelerate development of gene-edited plants.

North Carolina-based Benson Hill, founded in 2012 and named after two scientists, mainly licenses crop technology to other companies. But it decided to produce its own higher-yielding corn plant because of the low development costs, said Chief Executive Matt Crisp.

Calyxt plans to sell the oil from its gene-edited soybeans to food companies and has a dozen more gene-edited crops in the pipeline, including high-fiber wheat and potatoes that stay fresh longer.

Developing and marketing a traditional genetically modified crop might easily cost $150 million, which only a few large companies can afford, Crisp said. With gene-editing, that cost might fall as much as 90 percent, he said.

“We’re seeing a huge number of organizations interested in gene-editing,” Crisp said, referring to traditional crop-breeding companies, along with technology firms and food companies. “That speaks to the power of the technology and how we’re at a pivotal point in time to modernize the food system.”

Supporters of gene-editing say it allows a higher level of precision than traditional modification.

With CRISPR, one popular type of gene-editing technology used by Syngenta, scientists transfer an RNA molecule and an enzyme into a crop cell. When the RNA encounters a targeted strand of DNA inside the cell, it binds to it and the enzyme creates a break in the cell’s DNA. Then, the cell repairs the broken DNA in ways that disrupt or improve the gene.

(For a graphic on how the Syngenta process works, see: tmsnrt.rs/2KJmtxr )

Biotech firms hope the technology can avoid the “Frankenfood” label that critics have pinned on traditional genetically modified crops. But acceptance by regulators and the public globally remains uncertain.

The Court of Justice of the European Union ruled on July 25 that gene-editing techniques are subject to regulations governing genetically modified crops.

The ruling will limit gene-editing in Europe to research and make it illegal to grow commercial crops. The German chemical industry association called the decision “hostile to progress.”

The USDA also has no current plans to regulate gene-editing in animal products, according to a document provided by the agency.

The U.S. Food and Drug Administration, however, plans to regulate gene-editing in both plants and animals, FDA Commissioner Scott Gottlieb wrote in a June blog post. The agency is developing an “innovative and nimble” approach to regulating gene-editing, he wrote, that will aim to ensure its safety for both humans and animals while allowing companies to bring beneficial products to market.

The USDA, by contrast, chose not to regulate gene-edited crops because the process typically introduces characteristics that are “indistinguishable” from those created through traditional plant breeding, which take much longer, USDA Secretary Perdue said in a March statement.

Although there has been no widespread consumer resistance to gene-editing, activists who have long opposed genetically modified crops remain suspicious of any sort of tinkering with DNA. The new technique raises risks of creating undesired changes in the food supply and warrants increased regulation, said Lucy Sharratt, coordinator of the Canadian Biotechnology Action Network.

That kind of opposition is why agribusiness giant Cargill Inc [CARG.UL] is pursuing gene-edited technology with caution, said Randal Giroux, the firm’s vice-president of food safety, quality and regulatory affairs.

Cargill announced in February that it would collaborate with Precision BioSciences to develop healthier canola oil, but is proceeding slowly on agreements to store and transport other companies’ gene-edited crops pending clarity from regulators, Giroux said.

“We really do want to see gene-editing evolve in the marketplace,” Giroux said. “We’re watching to see how consumers adopt these products and react to these products.”

A gene-edited crop may take five years to move from development to commercialization in the United States, compared with a genetically modified crop that could take 12 years, said Dan Dyer, head of seeds development at Syngenta.

The firm is working on better-tasting tomatoes that take longer to spoil and hopes to launch a gene-edited crop in the mid-2020s, said Jeff Rowe, Syngenta’s president of global seeds.

DowDuPont – at a secret location in the U.S. Midwest – is field-testing waxy corn, a variety grown for industrial purposes that has been edited for higher yields. The company plans a commercial launch next spring.

Smaller firms will be nipping at the heels of these massive companies in the race to bring the next generation of genetically engineered foods to market, said Robert Wager, a biology faculty member at Vancouver Island University.

“The lack of USDA-regulated status is a huge game-changer,” he said, “for universities and small startups to enter the market.”