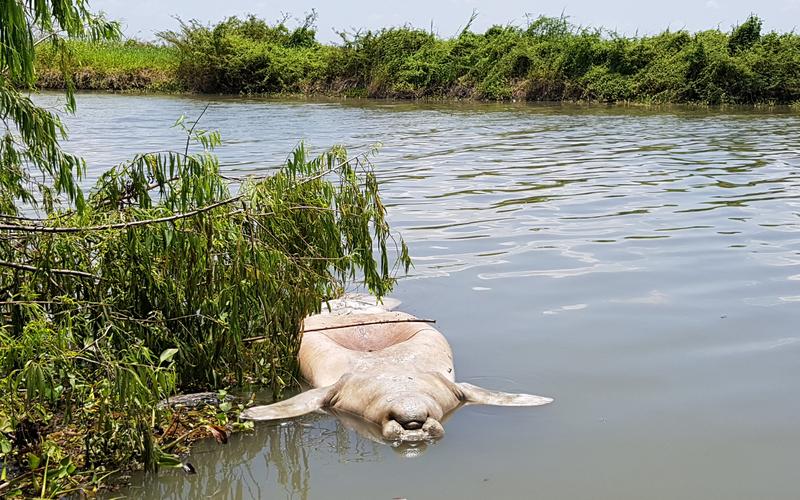 MACUSPANA, Mexico (Reuters) – In the swampy wetlands of southern Mexico, officials and researchers are struggling to explain the deaths of dozens of manatees, the chubby marine mammals once confused with mermaids by ancient mariners.

Fishermen who navigate the muddy waters inland from the coast of Tabasco state have discovered since May at least 28 dead West Indian manatees, also known as sea cows, along the Bitzal River and nearby streams.

The cause of the deaths remains a mystery. Locals report deaths of fish in the river and blame polluted water in an area that is near onshore and offshore drilling projects operated by national oil company Pemex.

The company says tests show no contamination in the area.

Other scientists wonder if the deaths of the placid animals, which divide their time between the ocean and inland rivers, are related to wider changes in the climate and rising sea levels.

“Whenever you see a die-off like this of a long-lived animal, it can be a canary in a coal mine,” said David Gonzalez-Socoloske, a tropical mammal ecologist at Andrews University, a small private college located in Berrien Springs, Michigan.

“Beyond the concern for the species, it tells you that something is going on with the environment,” he said.

Across the Gulf of Mexico in Florida, 92 manatees have died since January within an area where the growth of microscopic algae has caused a harmful “red tide,” according to the Florida Fish and Wildlife Conservation Commission.

But the same type of algae, which only grows in sea water, cannot grow in Tabasco’s fresh water where manatees have been perishing, said Ricardo Aguilar of Mexican wildlife advocacy group AZCARM. “The only relation is that the animals dying are manatees,” Aguilar said.

Desperate to prevent more deaths while they investigate the cause, wildlife authorities in Mexico have vowed to capture and transfer about 30 of the gentle herbivores to a nearby nature reserve.

But capturing a manatee, which can weigh up to 1,100 pounds (500 kg), is difficult, said Leon Olivera-Gomez, a marine specialist at the Autonomous University of Tabasco and the rescue mission’s lead scientist.

Before the capture, Olivera-Gomez said scientists use sonar to locate the animal. Then, a group of some 20 people on wooden boats surround and trap it with large fishing nets.

So far, the scientists have caught just two adults and a calf.

Olivera-Gomez said around 500 manatees, which are distantly related to elephants, are believed to live in Tabasco’s waterways. The International Union for Conservation of Nature, a leading wildlife conservation group, describes the population as vulnerable.

Past efforts in Mexico to save threatened marine mammals have seen mixed results.

In a bid last year to save the vaquita, a pint-sized porpoise that swims in the Gulf of California, two of the critically endangered animals were placed in a breeding program, but one died in captivity.

The manatee deaths highlight threats to the Gulf’s lowland wetlands, which have historically been defined by seasonal rains and dry spells that scientists say will grow more extreme as global sea levels rise.

Tests around the district of Macuspana, the birthplace of President-elect Andres Manuel Lopez Obrador, plus waterways in Centla and Jonuta, have not shown any spills from oil activity, Pemex said in a statement on Tuesday.

Last month, Mexico’s water authority CONAGUA collected samples from the Bitzal lagoon and said the water did not contain high enough levels of oil, metals or pesticides to explain the deaths.

However, Dennis Potenciano, 43, the leader of the fishing cooperative in Macuspana, home to around 700 fishing families, said oil contamination has killed numerous fish and made the water undrinkable.

“The government doesn’t tell us anything,” he said. “They treat us as if we are illiterate.”

“We aren’t catching anything because the river is so contaminated,” he said, on the grassy edge of a shallow waterway where he and friends found 12 dead manatees, flies swarming around their stiff, upturned flippers.