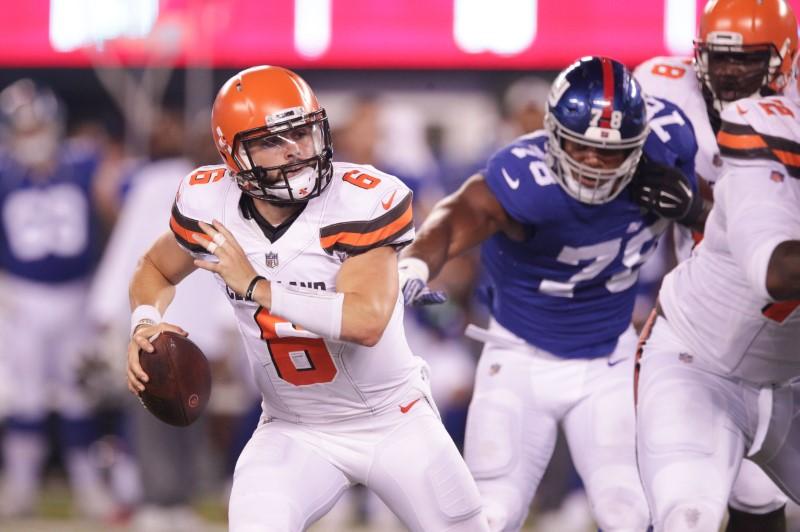 The NFL’s top two 2018 draft picks were on display as the Cleveland Browns defeated the New York Giants 20-10 in a preseason opener on Thursday night in East Rutherford, N.J.

No. 1 overall pick Baker Mayfield replaced Browns starting quarterback Tyrod Taylor late in the first quarter and responded by connecting on 11 of 20 passes for 212 yards and two touchdowns. The Heisman Trophy winner also converted two fourth-down plays with his own running plays.

Taylor, expected to be the starter, was a perfect 5-for-5 in his two series, throwing for 99 yards, including a 36-yard TD pass to David Noku.

Andrew Luck returned to the field for the first times in 586 days, playing two series in Indianapolis’ win at Seattle. Luck, who missed all of last season after having shoulder surgery, was 6 of 9 for 64 yards.

Seahawks quarterback Russell Wilson was 4 of 5 for 43 yards, including a 5-yard touchdown pass to tight end Nick Vannett. Wilson, who played just one series, also had 14 rushing yards on two carries.

Adam Vinatieri, who will be 46 in December and is entering his 23rd NFL season, kicked three field goals for the Colts.

Blake Bortles drove the Jaguars down the field to start the game, capping a 15-play, 79-yard drive with a 2-yard TD run. He converted both of his third-down passes and finished 6 of 9 for 53 yards.

Saints quarterback Drew Brees received the night off as Tom Savage started and completed 10 of 14 passes for 70 yards.

Bucs quarterback Jameis Winston, who is suspended for the first three games of the regular season for violating the league’s personal-conduct policy, played the second quarter against the Dolphins’ second team. Winston engineered two scoring drives, finishing 11 of 13 for 102 yards in four series.

Ryan Tannehill, in his return from two serious knee injuries, completed passes on his first four plays to open the game, driving the Dolphins 40 yards before rookie Jason Sanders missed a 53-yard field goal try. Tannehill wound up 4 of 6 for 32 yards.

Andy Dalton completed 6 of 8 passes for 103 yards, two touchdowns and one pick for host Cincinnati. The one pick wasn’t the quarterback’s fault as wideout John Ross fell on his route and Chicago’s Kyle Fuller picked it off and returned it for a 47-yard score.

Bears quarterback Mitchell Trubisky played two series, netting minus-1 yard on eight plays. He completed 2 of 4 passes for 4 yards. Tyler Bray, hoping to make the team, hit on 18 of 27 passes for 219 yards and one interception but no TDs.

Bills first-round draft pick Josh Allen entered in the second half, completing 9 of 19 passes for 116 yards, including a 14-yard TD to Ray-Ray McCloud III.

Buffalo’s returning backup QB, Nathan Peterman, was 9 of 10 for 119 yards with a TD and a pick over two drives, while AJ McCarron finished 7 of 10 for 116 yards with no TDs or interceptions.

Host Baltimore jumped out to a 17-0 lead as Joe Flacco hit Patrick Ricard for a 6-yard touchdown on the Ravens’ opening drive. It was the only series Flacco played, and he went 5 of 7 for 71 yards.

Ravens rookie quarterback Lamar Jackson was 7 of 18 for 119 yards and added 21 yards on five carries, including a 9-yard TD.

Brian Hoyer, Brady’s backup, completed 16 of 23 passes for 144 yards with no TDs or picks.

Marcus Mariota drove the visiting Titans down the field for a score on their first possession, capping it with a 4-yard touchdown pass to Darius Jennings. Mariota attempted just three passes, completing two for 42 yards, in his only series.

Packers quarterback Aaron Rodgers didn’t play, with backup Brett Hundley getting the nod. Hundley hit on 9 of 14 passes for 108 yards, including an 8-yard TD pass to running back Jamaal Williams, and one interception.

DeShone Kizer, who is battling for the backup job with Hundley, was 9 of 18 for 134 yards with no TD passes. He also gained 18 yards on three carries.

Houston quarterback Deshaun Watson, in his return from a torn ACL, played sparingly, completing his one pass attempt for 4 yards in his five-play stint during the Texans’ win at Kansas City, Mo.

Patrick Mahomes, who will be the Chiefs’ starter now that Alex Smith is with the Redskins, was 5 of 7 for 33 yards on two drives.

Cowboys quarterback Dak Prescott played one series, completing all three of his passes for 39 yards, including a 30-yard touchdown to rookie Michael Gallup. Prescott added a 12-run on his only carry.

Niners quarterback Jimmy Garoppolo was 3 of 6 for 34 yards in his only series.