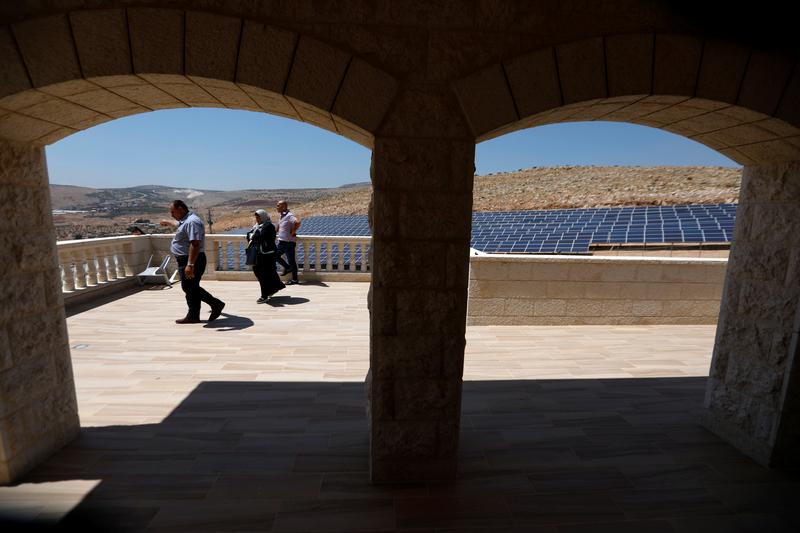 RAMALLAH/GAZA (Reuters) – From orderly rows of solar panels in a field in the West Bank to the chaotic rooftops of Gaza, Palestinians are hoping that harnessing the energy of the sun can reduce their dependence on Israel for electricity.

The West Bank only gets around three-quarters of the power its 3 million people need, imported mostly from Israel and, to a far lesser extent, Jordan.

In the Gaza Strip, power generation is so paltry that, even with imports from Israel and Egypt, it gets just one-third of what it needs – so the 2 million Gazans struggle on with an average of just four hours of electricity a day.

Individuals have taken it on themselves to install solar panels, trailing cables down the side of buildings to keep fans whirring or to power televisions and other appliances.

The number of panels in the enclave has increased four-fold in four years and they are now dotted on most rooftops and balcony on homes, schools, hospitals, shops, banks and mosques in a place where the sun shines 320 days a year.

In Gaza’s Nusseirat refugee camp, Sabreen Abu Shawiesh said installing solar panels on the metal roof of her one-floor house had changed her family’s life: “We almost had no electricity, nowadays fans are working all day.”

The sun may be free, but the technology is not, and Palestinians say their ability to import solar panels has been hampered by Israeli border controls.

In Gaza, which has endured years of Israeli and Egyptian sanctions aimed at isolating Islamist Hamas which rules the territory, tensions raised by weekly border protest since March 30 have increased the problem.

Israel has blocked all imports into the enclave except for humanitarian supplies.

Even before then, entrepreneurs in Gaza say they have sometimes been banned from importing various kinds of batteries – including those used for solar power – by Israel, on the grounds that they might be used for military purposes.

A spokesman for Israel’s Coordinator of Government Activities in the Territories said Israel had not imposed any import restrictions on solar panel technology and did not consider it to be “dual purpose”.

In the West Bank, ruled by President Mahmoud Abbas’s Western-backed Palestinian Authority, the public and private sectors have launched projects to diversify power sources to get cheaper electricity and more self-sufficiency.

“The government is in dire need of individual initiatives and investments to provide power so that it can become independent of the occupation (Israel), step by step,” Shifa’ Abu Sa’adi, head of natural resources at the Palestinian economy ministry, told Reuters.

Larger solar projects would require more land but it is scarce because, under the Oslo peace accords of the mid-1990s, Israel retains control of much of the land of the West Bank.

“We will be in a good position if we reach 5 or 10 per cent of the required electricity supply for Palestine in general from solar energy,” said Azem Bishara, chief executive officer of Massader, a subsidiary of the PIF.

Bishara said Massader intended to invest $200 million in renewable energy over the next six years to generate an additional 200 megawatts.

The Gaza Strip only has one power plant, which generated 140 megawatts in 1999 when it was built but now only produces 23 megawatts. The enclave imports 30 megawatts from Egypt and 120 from Israel. This is less than a third of the Strip’s daily needs – estimated at up to 600 megawatts a day.

“The well-being of 2 million people, half of whom are children, is at stake. It is unacceptable that Palestinians in Gaza are repeatedly deprived of the most basic elements of a dignified life,” McGoldrick said.