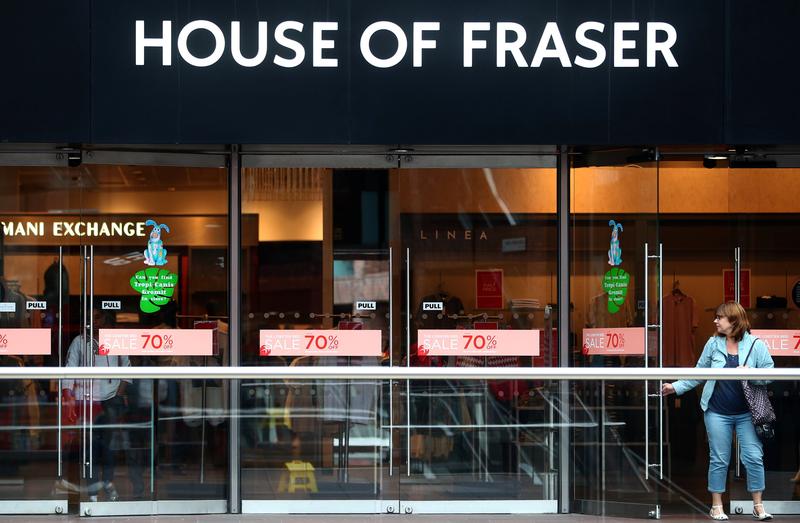 Billionaire Ashley, who also owns English Premier League soccer club Newcastle United, said on Friday his ambition was to transform House of Fraser “into the Harrods of the High Street” – a reference to the Qatari-owned luxury department store in London that was once owned by House of Fraser.

Sports Direct bought House of Fraser’s 58 UK stores, its brand and all its stock. But it did not take on responsibility for the retailer’s historic pension obligations. Sports Direct’s shares were down 0.7 percent at 1445 GMT.

“We will do our best to keep as many stores open as possible,” Ashley said in a statement, making no mention of his plans for the workforce – over 5,900 direct employees and 10,100 who work for concession partners.

“This is a massive step forward and further enhances our strategy,” he added.

Ashley’s stated desire is to make Sports Direct the “Selfridges of sport”, emulating the status of the department store on London’s Oxford Street.

Buying other businesses and strategic stakes forms part of that plan – equity investments have been made in Debenhams, French Connection, Game Digital, Findel and Goals Soccer Centres.

The policy has not been universally successful. Last month Sports Direct booked a charge of 85 million pounds for its disastrous investment in Debenhams – a rival department store group to House of Fraser.

Some analysts speculated that Ashley could use his 29.7 percent Debenhams stake to push for a merger with that business. Shares in Debenhams were up 1.6 percent.

Earlier on Friday, House of Fraser appointed Ernst and Young as administrators after talks with investors and creditors failed to find “a solvent solution” for the business.

The department store group, whose history dates back to 1849, was a founder member of Britain’s FTSE 100 blue chip stock index in 1984 but has been in private ownership since 2006.

A string of UK retailers have either gone out of business or announced plans to close shops this year, as they struggle with subdued consumer spending, rising labour costs and higher business property taxes as well as growing online competition, particularly from Amazon.

Department stores have been particularly vulnerable, with Bhs going bust in 2016, Debenhams issuing three profit warnings this year and even John Lewis [JLPLC.UL] cautioning on the outlook.

On Friday finance minister Philip Hammond gave his strongest indication yet that he was considering a tax on online retail players.

“If we can’t get international agreement to do this we may have to look at temporary tax measures to rebalance the playing field.”

Prior to the administration Sports Direct had owned 11 percent of House of Fraser. Nanjing Cenbest, part of China’s Sanpower Group [SPGC.UL], had owned the balance of 89 percent, having paid 480 million pounds for the stake in 2014.

House of Fraser had said in June it needed to shut 31 stores and make up to 6,000 people redundant to survive, but that rescue programme was thwarted after Chinese group C.banner pulled out of a plan to inject fresh equity.

Sports Direct has also been criticised by lawmakers, investors and media for its treatment of workers and poor corporate governance.

“Staff will undoubtedly be concerned about what the sale means for their wages and conditions,” said Rebecca Long Bailey, the opposition Labour Party’s spokeswoman on business.

House of Fraser’s pension scheme was expected to enter assessment by the Pension Protection Fund lifeboat, a spokeswoman for the PPF said.