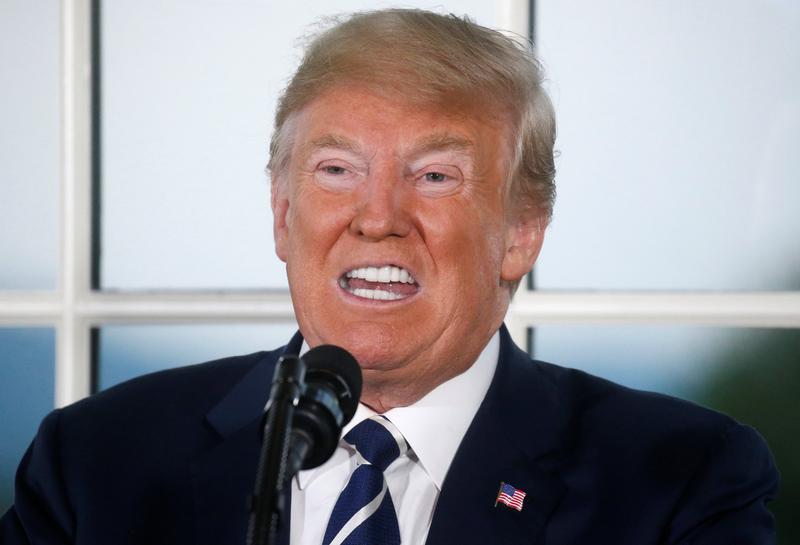 WASHINGTON (Reuters) – U.S. President Donald Trump on Friday renewed his attacks on NFL players pushing for criminal justice and other social reforms, after a number of players protested during the league’s preseason opening late on Thursday.

The National Football League has struggled to address the issue of players who silently protest against police brutality and social inequality during the national anthem, amid Trump’s regular criticism of such protests and as it tries to manage relations with both its players and fans.

As games opened on Thursday, several players knelt, refused to stand on the field, or raised their fists.

Trump, who has urged the NFL to suspend protesting players – who have mostly been black Americans – again called on the NFL to act, and said players should find another way to speak out.

“Numerous players, from different teams, wanted to show their ‘outrage’ at something that most of them are unable to define. They make a fortune doing what they love…..Be happy, be cool!” he tweeted early on Friday.

For the past few seasons, some NFL players have sought to call attention to police brutality towards African-Americans and minorities and racial oppression by taking a knee during the anthem before games. Trump and others have blasted the gesture as a sign of disrespect to the U.S. flag and the military, launching a political fight.

Trump has also condemned African-American players in other sports, spurring critics to say his comments are racially charged and intended to stoke his base ahead of the Nov. 6 midterm congressional elections.

Last week, the president lashed out at National Basketball Association star LeBron James, who told CNN that Trump was using sports “to kind of divide us.”

On Thursday, Miami Dolphins players Kenny Stills, Albert Wilson and Robert Quinn protested during the anthem, before facing the Tampa Bay Buccaneers in Miami at a preseason game, according to ESPN.

“Being a part of this protest hasn’t been easy. I thought I was going to be by myself out there,” Stills told the sports news outlet. “Today I had an angel with me, with Albert being out there. I’m grateful he sees what’s happening, and he wants to do something about it as well.”

Malcolm Jenkins, a football player for the Philadelphia Eagles, urged fans on Twitter to reflect on the country’s prison population and the NFL, both of which feature a large majority of people of color, specifically African Americans.

“What you witness on the field does not represent the reality of everyday America,” Jenkins wrote on Thursday. “We are the anomalies…”

League owners last month suspended a policy they had sought to put in place this season that would have required players to stand for the anthem, after the player’s union objected.

Representatives for the NFL, the NFL Players Association and the Players Coalition did not immediately respond to requests for comment.

In June, Trump refused to follow White House tradition of inviting league winners for an official visit, saying he would not extend an invitation to this year’s NBA champs.