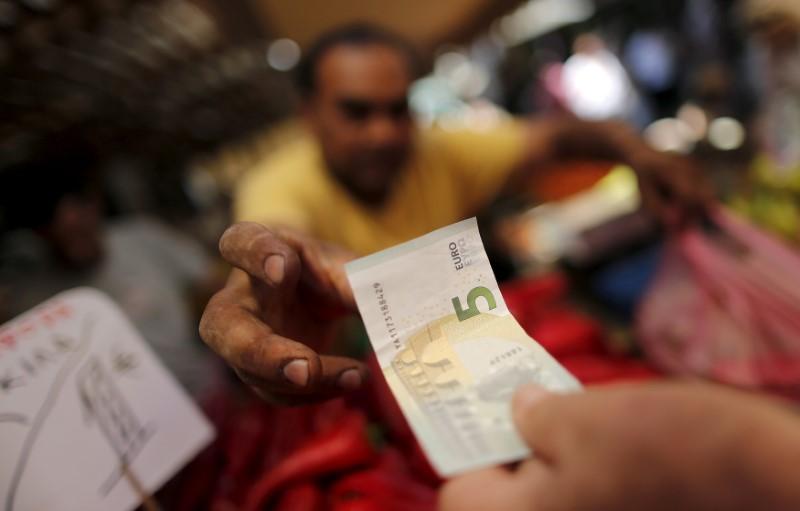 NEW YORK/LONDON (Reuters) – A plunge in the Turkish lira rocked global equities and emerging markets on Friday and fear of more turmoil sent investors scurrying for safety in assets like the yen and U.S. government bonds.

A vendor gets a five Euro bank note from a customer at the central market in Athens, Greece, July 8, 2015. REUTERS/Christian Hartmann/File Photo

European shares and a gauge of global equity markets fell more than 1 percent, while stocks on Wall Street were down about half as much. German stocks slid 2 percent.

The lira fell as much as 18 percent against the dollar in its worst day since Turkey’s financial crisis of 2001. The plunge followed a deepening rift with the United States, worries about its own economy and lack of action from policymakers.

The lira has fallen more than 40 percent this year, fanning worries about a full-blown economic crisis.

Bank shares across Europe fell and the euro slipped to its lowest since July 2017 as the Financial Times quoted sources as saying the European Central Bank was concerned about European lenders’ exposure to Turkey. The country is not a member of the European Union but is economically linked to it.

The dollar rose as exposure to Turkey could impact European banks and spark a domino effect as people begin to pull out of those banks and into U.S. assets, said Gregan Anderson, macroeconomic strategist at brokerage Bulltick LLC.

The turmoil has made it difficult for global investors to justify remaining in Europe and is negative for emerging markets, he said.

“The lira has been weakening since and it’s coming to a head today,” Wilson said, adding the downward spiral will continue if Turkey insists on a soft landing.

“The only way to correct these policy mistakes is to really make some concrete changes on the fiscal and monetary side.”

Shares in France’s BNP Paribas, Italy’s UniCredit and Spain’s BBVA, the banks seen as most exposed to Turkey, fell 3 percent or more.

An index of regional banking shares closed down 3.2 percent while the pan-European STOXX 600 index fell 1.2 percent.

The MSCI All-Country World index, which tracks shares in 47 countries, was down 1.15 percent and erased all its gains for the week.

Wall Street also fell, but not as hard.

Investors piled into “safe” government debt, with German yields hitting three-week lows and the yield on the benchmark U.S. 10-year Treasury note falling to 2.8768 percent as investors sought its safety.

The safe-haven Japanese yen hit a one-month high of 113.38 against the dollar.

The dollar index, which measures the greenback’s strength against a group of six major currencies, breached 96, taking it to its highest level since July 2017. It was last up 0.91 percent at 96.372.

Emerging market stocks lost 1.65 percent, while the Mexican peso, a proxy for emerging market currencies, shed 1.38 percent to the dollar.

Adding to emerging market currency woes was the Russian ruble, which weakened to 66.515 to the dollar. Overnight it had retreated to its lowest since November 2016 on threats of new U.S. sanctions, weakening beyond the psychologically important 65-per-dollar threshold.

Oil prices rose more than 1 percent as U.S. sanctions against Iran looked set to tighten supply, but futures remained lower for the week as investors worried that global trade disputes could slow economic growth and hurt demand for energy.