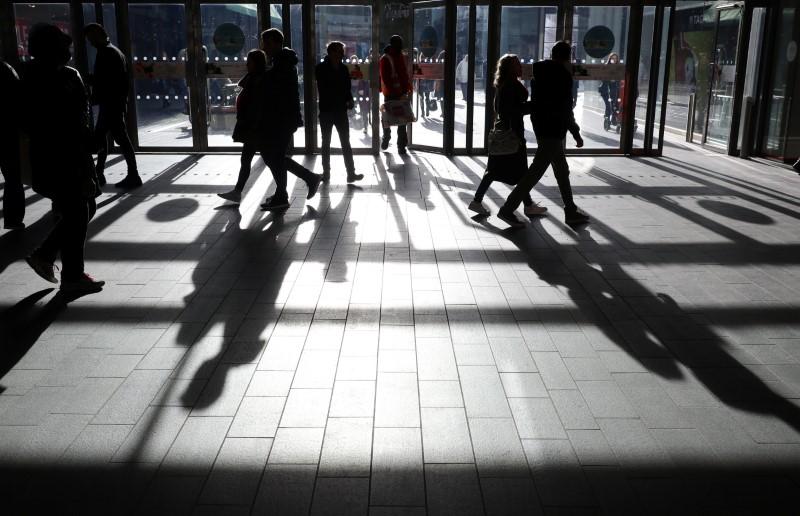 LONDON (Reuters) – Britain’s economy warmed up a little in the second quarter from its winter slowdown of early 2018, but there was no sign of an end to its stuttering performance ahead of Brexit next year.

The world’s fifth-biggest economy relied on the services industry for growth in the second quarter, despite signs that its households were under growing financial strain.

By contrast, manufacturers struggled and net trade dragged on growth as any boost from the pound’s post-Brexit vote fall faded away.

Gross domestic product expanded 0.4 percent in the April-June period after a 0.2 percent rise in the first quarter, as expected in a Reuters poll of economists, the Office for National Statistics said.

In annual terms, growth picked up only slightly to 1.3 percent in the second quarter after a nearly six-year low of 1.2 percent at the start of the year.

Sterling, shaken over the last week by growing talk of a no-deal Brexit, was little moved by the data which showed businesses remained reluctant to raise investment.

Net trade exerted the biggest drag on the economy since the third quarter of 2016.

Britain’s economy slowed after the decision to leave the European Union and is expected to continue to expand at a weaker pace than most other developed economies as the March 2019 Brexit date approaches.

“Overall we judge that the economy’s performance in Q2 was a touch disappointing, bearing in mind the support to growth from a double weather whammy of a recovery from a cold Q1 and a boost from a warm Q2,” Investec chief economist Philip Shaw said.

Still, news that the economy got over its winter slump is likely to reassure Bank of England policymakers who last week raised interest rates to a new post-financial crisis high of 0.75 percent despite concerns about the approach of Brexit.

Britain’s government has yet to agree a divorce deal with Brussels and has stepped up planning for the possibility of leaving the bloc without any formal agreement.

Finance minister Philip Hammond said Brexit uncertainty was having a “depressing effect” on Britain’s economy but he said growth would pick up to pre-referendum levels if the EU accepted London’s plan for their new relationship.

The ONS said the economy had been helped in the second quarter by retail sales and construction recovering from heavy snow earlier in the year.

“However, manufacturing continued to fall back from its high point at the end of last year and underlying growth remained modest by historical standards,” ONS statistician Rob Kent-Smith said.

In June alone, the economy grew 0.1 percent after a 0.3 percent rise in May, weaker than forecasts in the Reuters poll for a 0.2 percent expansion, the ONS said.

Growth over the second quarter was driven mostly by the service sector, the ONS said.

Quarterly growth in household spending quickened slightly to 0.3 percent from 0.2 percent in the first quarter, but stood only 1.1 percent higher than a year ago — the weakest annual increase since early 2012.

Consumers have struggled to cope with weak wage growth for much of the past decade and a spike in inflation after the Brexit vote only added to the problem. More recently, wages have risen more quickly than inflation but there have been signs that household finances remain stretched.

Retailers in particular have struggled. On Friday department store chain House of Fraser was bought from its administrators by discount retailer Sports Direct.