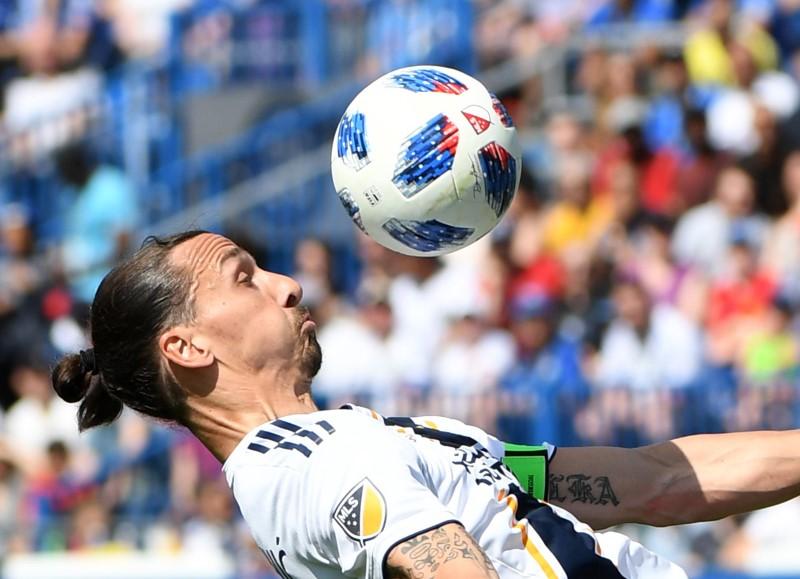 Zlatan Ibrahimovic returns from a one-game suspension when the Los Angeles Galaxy host the Minnesota United on Saturday at StubHub Center in Carson, Calif.

May 21, 2018; Montreal, Quebec, CAN; Los Angeles Galaxy forward Zlatan Ibrahimovic (9) plays the ball against the Montreal Impact during the first half at Stade Saputo. Mandatory Credit: Eric Bolte-USA TODAY Sports

It’s quite the understatement to say the Los Angeles star remains miffed over the reason he was disciplined.

Ibrahimovic sat out the Galaxy’s 2-1 loss to the Colorado Rapids last Saturday after he decided to skip the MLS All-Star Game on Aug. 1. League policy requires a player to sit out his club’s next match if he chooses not to play in the midseason exhibition.

“I think it is ridiculous, but yeah, no comments,” Ibrahimovic told reporters. “They do whatever they want. I come from a different world, I come from the real world.

“It is what it is. I respect in the end, and I’m sorry for my teammates only that I could not help them in the game. But yeah, people are interested in different things. They lose on it, and for me it doesn’t matter.”

The absence of Ibrahimovic, who leads the team with 15 goals, certainly damaged the offensive attack as the Galaxy (10-8-5, 35 points) saw their nine-game unbeaten stretch halted by the Rapids. Los Angeles managed just eight shots on goal.

The Galaxy reside in fifth place in the Western Conference but stand just two points behind the second-place Portland Timbers, who have played three fewer matches.

Minnesota United (9-13-1, 28 points) is in ninth place in the West and has dropped eight straight road matches. The Loons are six points behind sixth-place Real Salt Lake, the current holder of the conference’s final playoff spot.

Minnesota has dropped back-to-back overall matches as it begins a five-game road trip. The Loons don’t play at home again until Sept. 22, and the lengthy road excursion doesn’t feel too appealing with the team’s only successful outcome in 10 away matches this season being a 2-1 win at Orlando City on March 10.

“It does not even have to be a win,” Minnesota defender Brent Kallman told reporters of the road drought. “The goal on the road is just to get points. If we get a point or more out of this next game, maybe we will feel like we got a little monkey off of our back. We just have to find a way to get it done.

“It does not have to be pretty on the road, and a lot of times it isn’t. You just have to grind it out.”

Forward Darwin Quintero leads the Loons with 10 goals and eight assists, and he is riding a hot streak in which had has seven goals and six assists over the past seven matches.

Minnesota traded forward Christian Ramirez (seven goals) to Los Angeles FC for up to $1 million in allocation money on Monday.