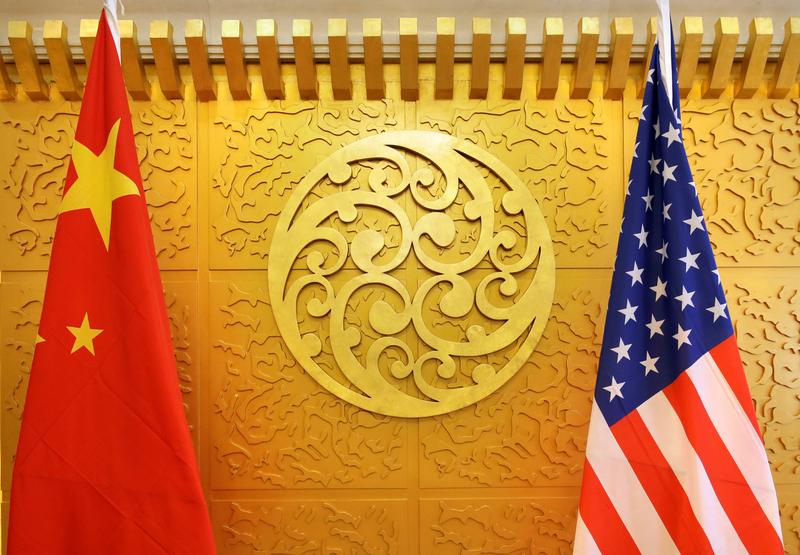 SHANGHAI (Reuters) – China’s state media continued a barrage of criticism of the United States on Saturday as their tit-for-tat trade war escalated, while seeking to reassure readers the Chinese economy remains in strong shape.

FILE PHOTO: Chinese and U.S. flags are set up for a meeting during a visit by U.S. Secretary of Transportation Elaine Chao at China’s Ministry of Transport in Beijing, China April 27, 2018. REUTERS/Jason Lee/File Photo

Commentaries in the People’s Daily, China’s top newspaper, likened the United States to a bull in a China shop running roughshod over the rules of global trade and said that China was “still one of the best-performing, most promising and most tenacious economies in the world.”

The commentaries come as trade tensions between the two countries intensify. China said this week it would put an additional 25 percent tariffs on $16 billion worth of U.S. imports in retaliation against levies on Chinese goods imposed by the United States.

One commentary accused the United States of “rudely trampling on international trade rules” and not taking into account China’s lowering of tariffs and continued opening of its economy, among other things.

“People of insight are soberly aware that so-called ‘America first’ is actually naked self-interest, a bullying that takes advantage of its own strength, challenges the multilateral unilaterally, and uses might to challenge the rules,” it read.

Another commentary argued that the Chinese economy was stable and was expected to remain so.

In the second half of this year, “comprehensive deepening of reforms will continuously produce benefits.” It said China could take steps to boost domestic demand while continued to cut corporate taxes and fees.

With these and other policies, “the Chinese market will show an all-new charm,” the commentary said.

A separate piece in the People’s Daily quoted vice agriculture minister Han Jun saying that if a trade war broke out, many other countries were willing and “completely able to replace American agricultural products’ share of the Chinese market.”

It also quoted the vice minister as saying that the impact of American tariffs on China would be “extremely limited”, but warned that were a trade war to escalate, the U.S. agriculture sector would feel its effects.

Earlier this week, Chinese state media accused the United States of a “mobster mentality” as it moved to implement additional tariffs on Chinese goods. Beijing had all the necessary means to fight back, the reports said.