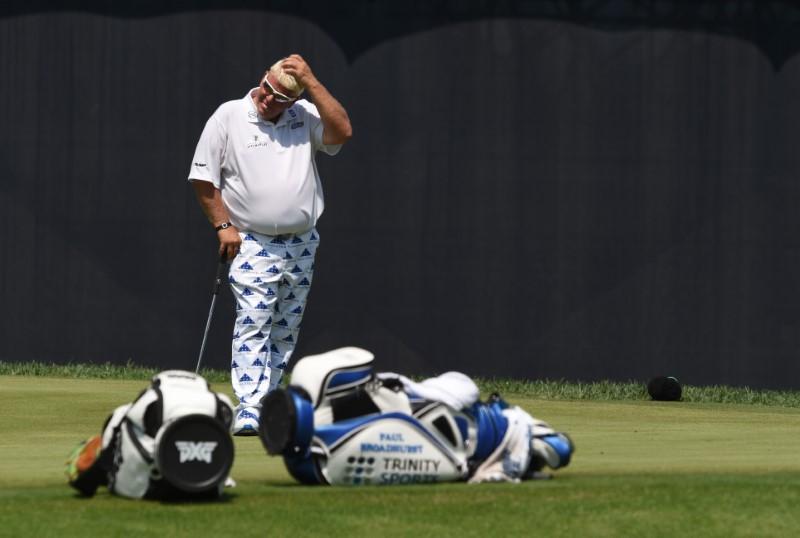 ST. LOUIS (Reuters) – To mark the PGA Championship’s 100th anniversary, the PGA of America is having a little fan friendly contest to determine the major’s greatest edition of all-time.

Voting on social media is conducted in a head-to-head match play format and as of Friday the choices had been narrowed to four; Tiger Woods 2000 v Tiger Woods 1999 and Rory McIlroy 2014 v John Daly 1991.

The result will be announced during Sunday’s final round, and if Daly were to take top honors, it would be the only thing ‘Long John’ would win at this PGA after making a grumpy, scowling exit from the Bellerive Country Club on Friday.

Having failed to make the cut at a major since 2012, Daly had a chance to end that run of failure, sitting on one-over, one off the even-par cut line with three holes remaining in his second round.

Then, as they so often have, the wheels came flying off the Daly machine.

His tee shot on the par three 16th sailed long. He flubbed his chip from the rough and needed a second.

With his chances of making the cut all but gone with the double-bogey, his interest also seemed to disappear.

At the par five 17th he unleashed his frustration through his driver and actually reached the green in two shots to have a a chance at eagle and getting back on track.

But Daly seemed to have already made up his mind that it was time to check out, two putting for birdie before playing partners Paul Broadhurst and Ryan Vermeer had reached the green.

While Vermeer and Broadhurst putted, Daly was well on his way to the 18th and launched his opening drive as soon as they appeared on the tee box.

A half-hearted chip out of a greenside bunker that drew a laugh from the gallery, a bogey, a quick handshake, signing for 70 and a stone-faced Daly was done.

No autographs and no wave to the fans who all day had encouraged him and called out: “We love you, John”.

“Have time for a couple of questions, John?” reporters asked as Daly made his way through the flash quote area.

His answer? Only an icy glare that could be felt through his wrap-around, reflective sunglasses.

But if there was any disappointment among Daly’s still sizeable and loyal gallery, it was nowhere to be seen, even as he breezed past fans with an air of disdain.

After 32 years as a professional golfer building his grip-and-rip, don’t-give-a-damn brand, Daly knows his audience and they were out in force on Friday.

More than a few of the fans would remember his glory days when he won two majors, including the 1991 PGA Championship after gaining entry as an alternate.

At that tournament, he generated a genuine buzz around a group that included a 52-year-old English journeyman and a PGA club pro.

During Thursday’s opening round his biggest splash may have been the golf pants printed with the St. Louis Cardinals logo.

Until his sudden loss of interest on Friday, he had been the engaging, big-hitting, big personality fans had come to love.

If Daly’s PGA Championship is voted the greatest of all-time, it will be the same fans to thank for making him a winner again.